A Funeral in Stranraer (Part 1)

The second week in June 2007 was an important time for David Hall, of Vintage Lorry Funerals, as his Daughter’s 21st Birthday celebrations were likely to coincide with a funeral in , some 397 miles from the company’s base in Wiltshire.


In May, Leisa McHattie , Daughter of a former Lorry Driver in Stranraer contacted David to advise him that her Dad, William Caldow was terminally ill and wanted to plan his own funeral. William had been a Lorry Driver all his life spending most of the time travelling down the A75 which is mainly a single carriageway road between and Stranraer. What most car drivers don’t realise is that Commercial Vehicles are limited to 40 miles per hour on single carriageway roads and the A75 which runs for 82 miles is one of the longest stretches of single carriageway on a major arterial trunk route. The A75 is notorious for Policemen setting covert speed traps for Lorry Drivers rushing to catch the Irish Ferry and William was caught on a number of occasions over the years and for a time his HGV licence was suspended. William had a strong sense of humour and apparently the reason for choosing , some 15 miles to the East of the , for the service, was that  William would have his last ride at 30 miles per hour on a vehicle that originally in 1950 was limited to 20 miles per hour. Thus when William was planning his funeral he knew would be technically exceeding the speed limit by 50% had the journey occurred before 1957 and he chuckled at the thought.


The price was agreed with Leisa and some of the likely Floral Tributes had been advised. The concept of the layout, featuring a DAD 1 registered Flat-Bed had been discussed, however, the final layout had not been signed off, when David received a phone call at 1530 hours on Wednesday May 30th to advise him that William had passed away at 1500 hours. In order for David to attend his Daughter’s 21st Birthday Celebration on Saturday June 9th, Leisa asked if it would be possible to do her Dad’s funeral on Saturday June 2nd.  Apparently it was one of William Caldow’s requests that his funeral should be on a Saturday as this would avoid people loosing wages to attend his funeral. When David realised that he was being asked at 1530 hours on a Wednesday to have his 1950 Leyland Beaver some 400 miles away in Stranraer on Saturday at 1030 hours, he said, ‘Hold on, Gene Pitney was 24 hours from Tulsa, and I’m being asked to be at Stranraer in 48 hours in a lorry that will take 48 hours to get there and I need a day to build the Support Structure for the flowers.’


Some how David had to find a way to take 24 hours out of the timescale and the only way he thought to do this was to use a vehicle capable of travelling twice as fast as his lorry to take the 1950 Lorry to . During his early years in the funeral business, David Hall, between funerals, used to do HGV Agency Driving for companies local to . One company who knew David was Rygors of Westbury and they had a low-loader trailer. David had previously floated the concept of using this facility so he immediately jumped into his car, arriving in Rygor’s yard at around 1600 hours. 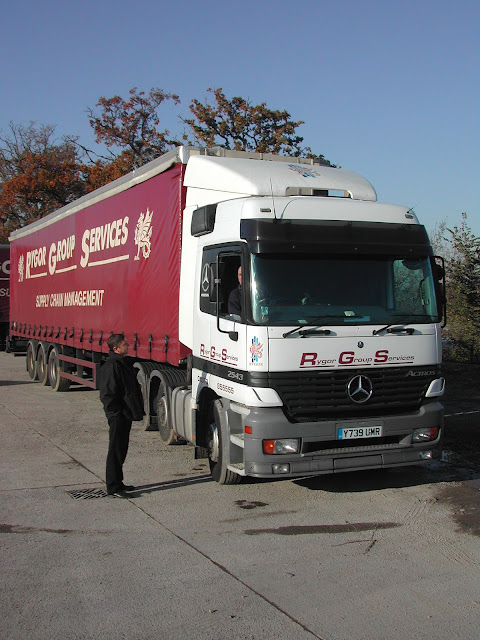 David walked into the Traffic Office and asked if he could borrow the low-loader trailer and a unit, however, unfortunately the funeral fell in a 4 day week and the Rygor fleet were flat out. With no likely spare vehicle emerging, David was told by the Traffic Manager that sadly on this occasion Rygors couldn’t be of help. David, was saddened by the news and stood in the office crestfallen, contemplating if there was anything else he could do. As David was leaving the office he bumped into a rotund colourful character who said to David, ‘Do you know who I am?’ David said, ‘You are Barry Rygor, the Boss.’ The colourful character replied, ‘No I’m the (expletive) Yardman!’ Having overheard part of David’s conversation with his staff, Barry Rygor shouted across the office, ‘Find this man a (expletive) motor, we ain’t going to let this family from down.’


Barry told David that the trailer wasn’t a problem and that he should bring his lorry down to Westbury on Thursday afternoon, load it onto the trailer and Barry would somehow find a Tractor Unit. During Thursday David prepared the deck of the Leyland Beaver for the funeral, sheeted the deck and travelled to Westbury as he had been instructed.  With the help of a Mechanic David gingerly drove his pride and joy onto the trailer, strapping it together with the demountable ramps and made a point of talking to Paddy the Shunter who he had known for a long time. When asked about the prospects of Barry magically resourcing a Tractor Unit from thin air, Paddy said, ‘Don’t worry Dave, get to bed early, get back here for half past four  in the morning and I’ll have the Tractor Unit coupled into the Trailer.’


As David drove into the Rygor yard in his car at 0425 hours he couldn’t believe his eyes, a brand new Mercedes Benz Demonstrator Tractor Unit was coupled to the Trailer and the whole rig had been washed. Paddy handed David the keys and said, ‘Go steady Dave, watch out for the Kojaks with the Kodaks on the A75.’ 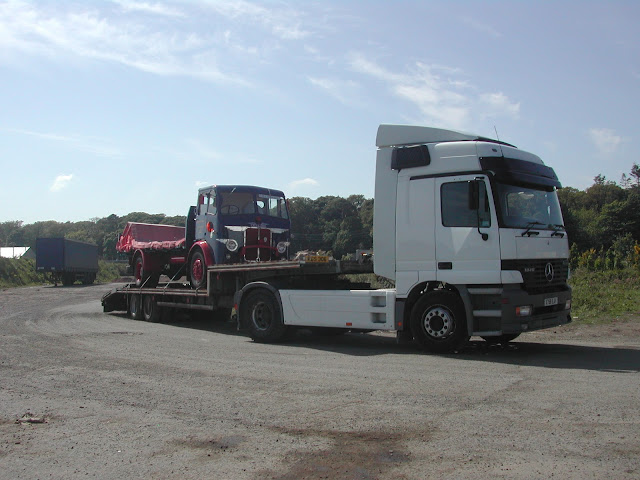 The Mercedes Benz cruised along at 56 miles per hour on the M5 & M6, twice the speed of the Leyland Beaver but sadly using twice the amount of fuel that the 1950 vehicle would have used.


David kept at 40 miles per hour on the A75 and didn’t need the multitude of warnings issued by oncoming vehicles about a speed trap further up the road. Some young Lorry Drivers flashed their lights, risking a booking by the covert Police, positioned all along the road, for warning other drivers. However, older men simply put their right hand out of the driver’s window with their thumb pointing downward, a technique established in the 1950s. Just after Newton Stewart, David was flagged down by a motorist, it wasn’t a Highwayman but Stuart Caldow, Brother of William, the Deceased. He shook David’s hand and thanked him for finding the low-loader at short notice, however, William had apparently left instructions for a Plan B which would have involved Stuart and a mate double-shifting a Stranraer based low-loader down to and back within a 16 hours working shift.


Stuart Caldow then took David to the undercover storage that the Family had arranged for the 1950 Leyland Beaver. Stuart helped David unload the vintage lorry and assisted David as he prepared the deck for the following morning. As David manoeuvred the articulated low-loaded into a space in the yard, he couldn’t help but notice the wide open countryside and high hills. This brought back memories of the views from the cab of lorries in the 1950s when David was a little boy travelling with Drivers collecting sheep from . Little did he think then that eventually he would end up with his own Leyland Beaver. 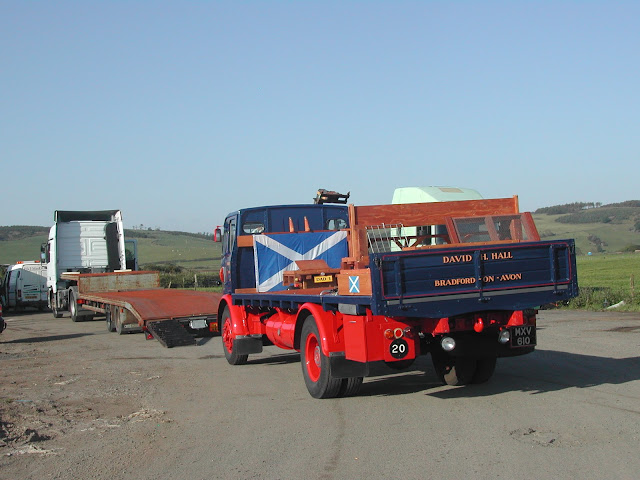 Next month David will describe what happened when he arrived in Stranraer.