A Funeral in Stranraer (Part 2)

Last month David Hall described the amazing efforts everyone made to get his lorry to Stranraer and this month he explains some noteworthy events that happened in Stranraer and on his way home.
Stuart Caldow, Brother of the Deceased, William Caldow, took David in his car to Stranraer from Castle Kennedy, where the lorry was parked overnight, and undertook a dummy run of the journey the cortege would be taking the following day. William Caldow had planned his own funeral and his last ambition was to the first person buried in the new section of the , which is based on a hillside with a very steep slope. William achieved his wish to be in the first grave to be dug in the new section of the cemetery, which was near the entrance at the bottom of the hill. David and Stuart walked up the hill and from the highest point there was the most wonderful view of the , including the , a granite outcrop from the sea, from which most curling stones were made. David looked back down the hill to William’s grave and said to Stuart, ‘Your Brother has been buried in the wrong end of the cemetery. He would have loved this view and it would have been uplifting for his family visiting him in years to come.’ Stuart agreed, so David suggested to Stuart that in the morning he would drive past the grave and take William to the top of the hill for one last look. Stuart thought that this would be a wonderful thing to do, however, he agreed to keep this development a secret.
Stuart took David to the Bed & Breakfast that William’s family had arranged and the owner kindly agreed to get up early in the morning to make David a cooked breakfast as he would have a long day ahead of him. As David hadn’t eaten anything since 0345 hours that day he walked into the town to find somewhere to sit down and eat. As it was now approaching 2000 hours most places were closed with their lights off, however, David stopped at a restaurant with half its lights on, he tried the door and it was open. As David entered the restaurant a Waitress rushed forward to advise that they were just about to close. David said, ‘It says on your window, ‘All Day Breakfasts’ and there are 24 hours in a day, I haven’t eaten since 4 o’clock this morning and I driven 400 miles from Wiltshire to undertake William Caldow’s funeral in the morning!’ The Waitress then went to speak with owner who invited David into the back room to have a fish supper with him and his family.
That night David walked along the seafront to clear his head and he noticed two things. A miniature railway ran around a park and where the track crossed a pathway there was a sign ‘Beware of the Trains’, however, someone had obliterated the ‘T’ and ‘Beware of the Rains’ proved very prophetic for the following morning. David also saw a monument to all those killed on January 31st 1953 during which an horrendous storm hit the UK and over 130 people perished when the Irish Ferry Princess Victoria, bound from Stranraer to Larne, went down around midday. The precise number of dead was never established because in those days foot passengers boarding the Ferry were never logged onto the manifest and one of the lessons learnt from this disaster was that in future the details of every foot passenger on any sailing would be documented. David was brought up in Easington on the North East coast and being born in 1953 he has always been interested in the impact which the storm had, however, previous to seeing this Monument he had always thought most of the damage occurred down the east coast of .
Heavy rain fell overnight and in the morning as David loaded the Floral Tributes at Frazer Hare Funeral Directors, the main Funeral Director in the Port, who uses a grey fleet for weddings as well as funerals. Frazer Hare and his family made David feel very welcome and braved the conditions, passing the Floral Tributes up to David who fixed them into place. Rain continued to fall as the Leyland Beaver trundled eastwards along the A75 to where William’s coffin had resided overnight. As the Leyland Beaver reversed close to the wall of the church, awaiting the arrival of the coffin, the rain stopped and the sun started to shine as William was carried out of the church. Stuart helped David on the deck of the Leyland Beaver and instinctively knew what he needed to do without being told as the coffin was turned on the deck and secured in place. 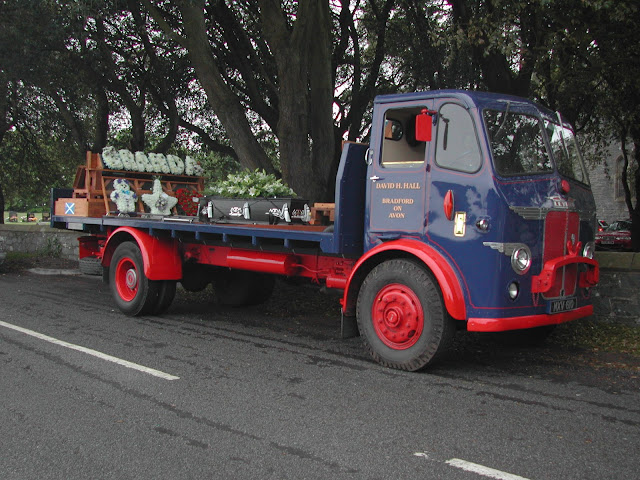 As the Cortege approached the grave in , David pointed with his finger indicating that instead of turning right like the following limousines, he was going straight ahead up the hill to the top of the cemetery. Everyone was dumbfounded and did not know why David hadn’t follow the instruction, however, all been clear as David climbed out of the motor, walked back towards the coffin, removed his beret and pointed to the stupendous view. 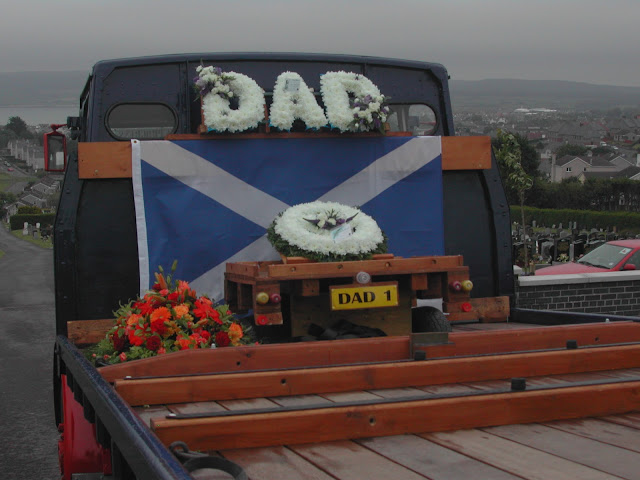 David then drove down the hill to the grave and witnessed William being interred before he tidied up the deck ready for the journey home. By this time the wind was very strong and every member of Frazer Hare’s family helped David put the tarpaulin onto the deck. One person held onto each corner and David started at the headboard and progressively put a rope across the deck doing dolley knots and tightening the rope onto the rope hooks on each cross member. The backboard blew off its holding rods and three people helped David wrestle against the wind and finally managed to fix it back in place.
As most of Frazer Hare’s staff were involved in a Wedding that afternoon Frazer’s Father was tasked to help David get the Leyland Beaver back onto the trailer. David declined the offer of his assistance as the elderly gentleman seemed to be outside his comfort zone and David drove out to the garage in Castle Kennedy thinking that he would have to perform the task himself. Luckily two Mechanics were just finishing up for the day at the garage and David enlisted their help. The older Mechanic didn’t fill David with much confidence with imprecise instructions and David ended up with the 1950 lorry not square on the deck and in great danger of tumbling off it, if David had left it in that position. David was furious with the older Mechanic and told him he was about as much use as a chocolate fire guard. David then turned to the young 16 year old lad who stepped forward, and listening intently to David’s instructions. Gingerly David reversed the Leyland Beaver off the trailer and then followed the lad’s instructions to position the vintage lorry in the middle of the deck. The lad had no fear and indicated with his fingers which way David should steer, and using two thumbs up to indicate when he was on the right line. When the Leyland Beaver was on the trailer David apologised to the older Mechanic and gave him two £5 notes for him and the lad. The older mechanic said that this was too much money saying ‘This Stranraer not Sydenham!’ He gave David one £5 note back and handed the other to the young lad. 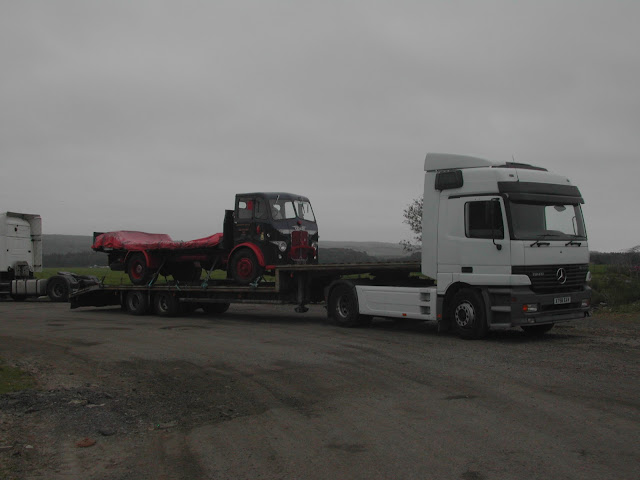 It was now almost 1530 hours and David set out on the long trip home, as the deal with Barry Rygor was that the low-loader was needed to be back at Westbury to enable a driver to leave on Sunday morning at 0600 hours. Earlier in the day, Leisa McHattie, William’s Daughter, had expressed her concerns about the length of David’s forthcoming day but David said, ‘I have to get home tonight. This wagon is a Cinderella wagon, the Mercedes will transform into a pumpkin at midnight somewhere down the M5’. Whilst driving the Mercedes Benz articulated lorry David reflected how amazing the young 16 year old lad had been and recounted the amazing events that happened at a John Mayell’s Blue Breakers concert at The Hop Community Centre, Welwyn Garden City, in 1965. The Blues Breakers played the first set without a guitarist as Eric Clapton was not well. During the interval a sixteen year old school-boy Mick Taylor walked up onto the stage and told John that he knew most of the material and asked if he could fill in for Eric during the second set. He so impressed John Mayell that night, that 2 years later when Peter Green left the Blues Breakers, John gave Mick Taylor a full time job. Mick later replaced Brian Jones in the Rolling Stones. On July 19th 2003 Mick Taylor was invited to play with the Blues Breakers to celebrate John Mayell’s 70th Birthday in .
There were less and less vehicles on the motorway as David glided southward, and David, after taking all the necessary breaks, rolled into the Rygor yard at 0100 hours. The yard was packed with over 40 vehicles and the only space was down the centre so David left the Mercedes Benz and trailer in a position so that all the other lorries could get out, before jumping in his car to drive home. Whilst tiredness had never been a problem whilst he was driving the lorry, David became very drowsy driving his car and had to stop and walk around it twice on the way home.
On Monday morning David took the train to Westbury and when he walked into the Rygor yard he was astounded by the transformation. Saturday night the yard was jam packed, Monday morning everything was gone apart from the low-loader trailer with the Leyland Beaver still on board. David spoke to Barry Rygor about the trip and drove the Leyland Beaver home.
The only time that Westbury and Stranraer appear on the same map is during the BBC Weather graphics and each night David reflects on the momentous day he had in Stranraer and the journey up and back.