Vintage Lorry Funerals second assignment for Thomas Davis Funeral Directors in involved visiting the Deceased’s home in and then St. Michaels & All Angels Church in Bedminster before going to South Bristol Crematorium. As is 12 miles south of Thomas Davis’ Southville base, Austin Williams, Funeral Director, asked David Hall to find a suitable transhipment facility on the A37 where the coffin and the flowers could be transferred onto the 1950 Leyland Beaver lorry. 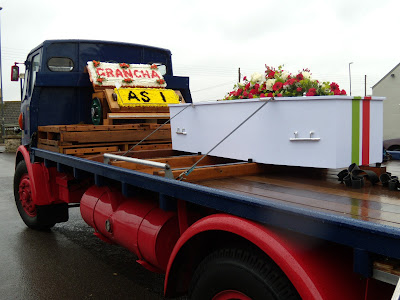 David managed to secure the permission to undertake the operation within the car park of the Warwick Arms which is little used in the early morning on a Monday in October. told David that the flowers would only involve a Coffin Spray, however, the Florist would be Eileen’s of West Street Bedminster. ’s concerns at this early stage were whether the vintage lorry would manage to get to the Church in Windmill Hill, an area in with narrow streets, renowned for their parking problems. The only way into Windmill Hill is under a and these rows of terraced streets are isolated from the rest of creating a unique culture in which residents believe they are a law unto themselves. Residents believe that they have a right to park their car in front of their house or flat and the situation is exasperated when a large funeral takes place in St. Michaels & All Angels Church, which is opposite Windmill Hill Community Centre. When it comes to parking cars before a funeral, vehicles are deposited anywhere particularly on corners with driver oblivious to the double yellow lines. Thomas Davis had previously encountered problems with their hearse struggling to get to the church so logically the 26 foot long lorry would experience horrendous difficulties. David undertook a risk assessment and identified a route targeting wider streets with houses only on one side which would lead to approaching St. Michaels & All Angels Church on level ground.
David phoned Eileen’s Florists and spoke to Carol who had not yet heard from the Family, however, David used the opportunity to explain how the Coffin Spray would be secured. Carol explained that the shop had no internet facility but she promised to phone David as soon as any orders were placed. David rang on the Wednesday and told him that he needed information on the flowers as soon as possible even if it was just a Coffin Spray. David’s wife received a call from Carol on the Thursday morning to advise that David would have to plan to load, two 3 feet long Designer Boards, a Swinging Heart, a 17 inch Heart, a Polo Ring and a Bundle of Leeks which the Family had asked to be held vertically. Carol was also adamant that her flowers should be carried flat on the deck as she didn’t want her flowers damaged!
When David got back home he was amazed at the number of Tributes for a ‘Coffin Spray only’ funeral and was concerned that if the flowers were laid flat on the deck they would be damaged and the only way that the flowers would not be damaged would be by fixing them to boards held at an angle, displaying the Floral Tributes for all to see. David put the problem to Austin Williams who spoke to the Family and reported that they would trust David’s judgement. So David phoned Carol to convince her that his strategy and tactics for securing Floral Tributes would not damage the flowers. A Florist without internet facilities is like Fish without Chips in 1950’s vernacular or Ant without Dec in today’s parlance. Without the facility to send a picture David would have to explain what he was proposing over the phone. Many years ago David worked for Gerald Ronson who used to encourage Junior Management to identify their biggest problem, be persistent in tackling it and this would create their biggest opportunity and so this proved with Carol.
David normally tells people what he does but he doesn’t reveal how he does it, however, he had to break this rule for Carol. Once she understood that David would use plastic fasteners to secure the flowers Carol was relaxed and told David the colours of each Tribute so that he could allocate the fastener in his collection of the right colour to match each flower arrangement. 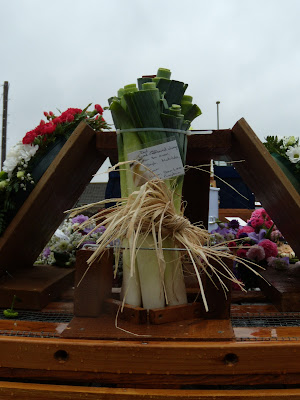 Normally David would design a layout, sketch it and email it to the Family for approval, however, by noon on Friday it was time for action not planning and thinking. Carol explained that as the Deceased was Welsh she had been tasked to provide a bundle of leeks and David said that if she was struggling he would ask his friends at SK Fruits Trowbridge to help. Designing on the hoof David quickly determined that the two Designer Boards, ‘GRANCHA’ and ‘AS 1’, should be loaded together and he saw a way of creating the rear of a car with ‘GRANCHA’ forming the rear window and ‘AS 1’ being the number-plate on the boot. The remaining Floral Tributes were given individual positions on 4 sides of a pyramidal structure at the rear of the deck, with the Bundle of Leeks, held vertically, facing the Family following in the limousine.
David left home early on the Monday morning passing through villages whilst most people were still in their beds. This strategy is ideal for the narrow streets in Norton St. Philip, the site of the Pitchfork Rebellion on June 26th & 27th 1685. The transhipment of the coffin and flowers worked well with Thomas Davis employees handing Tributes up to David who secured each one onto its stand whilst rain fell steadily. As soon as the coffin was loaded the rainfall subsided which is normally the case.
As the vintage lorry followed the empty hearse towards Windmill Hill Austin Williams asked David, ‘Are you confident you can get to the church?’ David confirmed that he didn’t feel there would be a problem that he couldn’t overcome, however, he knew that probably had the hearse in front as Plan B. The Leyland Beaver passed under the Railway bridge, climbed Windmill Hill and took a right into as David’s research had suggested that there would be less cars on this route rather than the more direct way to the Church using . As the lorry turned left into Somerset Terrace David saw that people had left cars in a hurry to get to the service, leaving them at an angle to the kerb. The hearse in front slowed down at a narrow gap and David knew that with his lorry being over 12 inches wider than a hearse then this gap would be extremely tight. David asked to put his head out of the window to check the clearance on his side which was less than an inch and he said, ‘Dave you’re clear on this side, I’m confident you’ll make the church.’ is a big man with immense presence, just the sort of bloke to give a half time talk at Ashton Gate after a mediocre first half display by the Robins. At the junction with cars had been dumped on double yellow lines on both side of the road on corner which made it extremely difficult for the hearse in front to get around. David realised that he couldn’t get around the corner in one movement, put in one shunt, wrestling with the steering wheel changing the lock as quickly as possible. Miraculously the vintage lorry cleared the cars and descended to the clear area outside St. Michaels & All Angels Church, which David likened to man dying of thirst finding an oasis in the desert.
David got out of the Leyland Beaver, shook the Vicar’s hand and asked, ‘Is this Michaels & All Angels, or is it St. Michaels & Cars at All Angles?’ The Vicar smiled as he urged drivers to park on his lawn to escape the gridlock. Surveying a sea of cars around him David said to the Vicar, ‘In the Good Book a bloke called Moses hit his stick on a rock and caused the to part, creating a path to safety. Could you tap your staff on the path and create a path through these cars?’ The Vicar explained which cars were associated with the funeral and predicted that would provide the best exit.


After the service the Vicar admired the Leyland Beaver and asked if he could ride alongside David to South Bristol Crematorium. However, David didn’t think it was wise to put out, as David was always taught that the Paymaster is the Saymaster.
Posted by David Hall at 07:18 No comments: