A Havant Funeral that became a ‘Missoura’ Boat Ride

Vintage Lorry Funerals undertook two Havant funerals within 5 months in 2014 and the second one was memorable for both good and bad reasons.
When David Hall is booked for a funeral he needs a lot of help regarding the information on flowers. Unlike other Carriage Masters who can cramp their flowers either side of the coffin, and consequently have little need for prior information, David displays Floral Tributes in multi-tiered eye catching displays. In order to achieve this, it is a cardinal requirement that a Florist has the time to talk to David and can accurately describe and measure each Tribute that will be included in the display. Although the Florist in the second Havant funeral produced some exquisite Floral Tributes, she was often in the shop on her own, too busy serving customers to have any detailed discussions with David. David told himself that he would probably experience a ‘Missoura’ Boat Ride.
This expression is derived from the Clint Eastwood film, The Outlaw Josey Wales, which is one of David’s favourites. Josey Wales was a Confederate Soldier who attempts to avenge the murder of his family by Renegade Union Troops. Josey is not the most popular person, being chased by Bounty Hunters and Union Soldiers and a key moment in the film involves a river crossing. The ferry is a raft being pulled along a rope by a Boatman who sings the appropriate song for the people on board. Josey and his companion get across to the sound of ‘I wish I was in ’, however, the posse boards the ferry as soon as it docks on the other side. Josey waits until the raft is in midstream and with the Boatman singing ‘The Battle Hymn of the Republic’, Josey takes his Winchester Rifle and with one shot breaks the rope. As the raft gathers speed with the current, Josey Wales proclaims, ‘Those men are going on a Missoura’Boat Ride.’ So its use in David’s parlance means that some events will happen outside his control.
The day started well with the Leyland Beaver leaving at 0445 hours and arriving at Sutton Scotney Services on the A34 at 0630 hours where David stops to buy a paper. Whilst walking across the forecourt David was in close proximity with two older Lorry Drivers and David said to one of them, ‘Driving this Leyland Beaver has made me a little deaf.’ The old Lorry Driver shook his head, ‘Sorry, I’m a bit Mutt n’ Jeff, too many hours in noisy old wagons.’
Over the years David has built up a number of favourite routes which are unused by the general public, often unclassified roads that are wide with an excellent surface, occasionally originally based on Roman Roads. One such road links to the A32 and goes via Molestead and enables the Leyland Beaver to travel the shortest route between Wiltshire and Havant. David arrived outside the Funeral Directors at 0815 hours just as the Lady who lives in the bungalow next to the Funeral Directors was about to depart for work. She said, ‘The Funeral Staff won’t be in for another 45 minutes, do you want me to go back into the house and make you a cup of tea?’ David held up his flask and declined the kind offer but thanked the Lady for her kindest.
It was a McMillan Cancer Open Day at the Funeral Directors and each member of staff had prepared cupcakes and cheesecakes. David reluctantly tried a cupcake and then did a poor impersonation of Paul Hollywood from the Great British Bake Off.
The flowers were supposed to be at the Funeral Directors for 0900 hours, however, when no Floral Tributes had arrived by 1000 hours David phoned the Florist. She was concerned that the cards from the Family had not arrived yet and wasn’t keen to release the flowers. David tactfully explained that it could take 90 minutes for him to secure the flowers and he needed them within 30 minutes, stressing that the cards could be attached to the Tributes at the house, which is the normal practice.
David was relieved when the Florist’s van pulled into the car park. The driver was a lovely German lady called Genia and she helped David put the ‘GRANDAD’ onto its stand. However, David’s heart dropped when he saw that ‘MO’ was 36 inches long and not 23 inches that he had estimated and he quickly evaluated what needed to be changed and the impact on the rest of the display. As the Deceased had in his youth had delivered Fruit & Veg in , David arranged for S.K. Fruits in Trowbridge to supply a fruit-box that was the centrepiece of the display. The agreed layout with the Family featured 2 ‘Polo Rings’ either side of the fruit-box and David fixed one which Genia had brought with her one the first run whilst she went back for the second load. 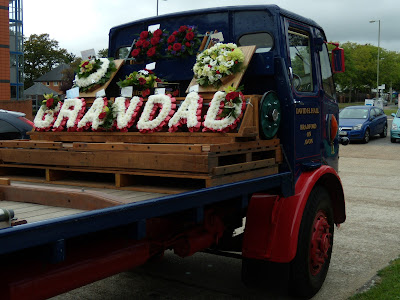 When Genia came back with the rest of the flowers, David then assessed what he saw and said, ‘The second ‘Polo Ring’ is missing!’ Genia rang her boss and told David that there was only one ‘Polo Ring’, the order had been changed to a Posey. David was upset that the display had been ruined as it was paramount that both Tributes either side of the fruit-box should be the same to provide symmetry. Genia understood and she suggested taking down the ‘Polo Ring’ that was already fixed in place and use two Poseys which were similar in size.
At the house The Family were amazed at the display and David thought that despite his ‘Missoura Boat Ride’ he appeared to land safely. At the Crematorium after the service a lot of people thanked David for all his efforts in making the day so memorable. Just before the Head Mourners were about to get into the limousine they approached David in a line and bowed a bit like a Band thanking an audience at the end of a concert. Each one then came forward to shake David’s hand and the eldest Daughter asked David if he would be attending the wake. David explained that as he started at   0445 hours, under Drivers Hours Legislation, he had to be home by 1945 hours, and reluctantly he couldn’t attend. The younger Daughter said that she had a spare bed in her house which David was welcome to use. Both ladies were sad that David decided to go straight home, however, David knew he had to prepare for his next funeral which was early the following week. As David pulled away from the crowd someone came running after him and an athletic young man handed some money to David saying, ‘This is from the Family.’ David put his right hand in front of his wing mirror to say ‘Thank You’ and then put his side lights on and off twice, the code that Lorry Drivers used in the 1950s to say thank you. 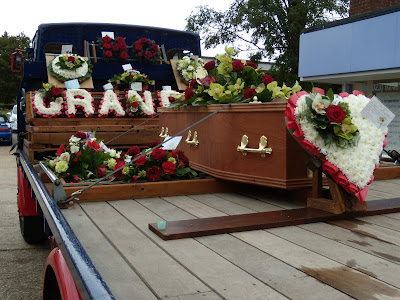 Getting home wasn’t easy because David’s Wife, who acts as Mission Control, advised that an accident had stopped the traffic on the A34 and the queue was stacking back to the M3 junction. There was only one solution, which was to go through . In this modern era people have smart phones with many apps. However, David only uses his mobile for calling, he can read texts but can’t send them. Some people these days have Tablets, but the only Tablets that David is interested in are flat Floral Tributes that he secures at an angle and the anti-inflammatory tablets he takes to reduce the aching in his arms. David’s Sat Nav is the back of an envelope with road numbers and Landmarks observed when David is doing his due diligence, checking the route on Google Street View. David’s Wife knew that David would have no plan in his head to get through so she gave him specific instructions and the landmarks to watch out for. David got through without a problem and found a suitable place to stop to phone a Cardiff Funeral Director at 1600 hours. The Funeral Arranger asked when David would be home so that the Funeral Director could call him on his mobile. David said, ‘If all goes well, home is about 2 hours ride from here, so please ask him to phone me at 1800 hours.’


David reversed the 1950 Leyland Beaver up his drive and into his garage. He had just pulled the stop cable on the 600 engine, creating a silence, when his mobile rang at 1800 hours. It was Cardiff Funeral Director and it was on with his next job once he had emailed the pictures he had taken during the day to the Havant Family.
Posted by David Hall at 06:44