Situations encountered on the Road

There is always a massive change in people’s perception when David Hall leaves the crematorium after a funeral. Whilst he is leading the cortege the Family of the Deceased think that his lorry is wonderful, however, when he is out on the open road most people believe that a vintage lorry trundling along at 30 mph is a nuisance at best or an obstruction holding people back which is amplified at both end of the working day. 30 mph was fast in 1950 when the speed limit on lorries over 3 ton was 20 mph, however, it is painfully slow for the modern motorist.
David does detailed planning before a funeral to identify roads which cars can overtake the Leyland Beaver with ease. Lengths of Dual Carriageway on a country road are a Godsend to reduce the frustration of drivers trapped behind the lorry, however, David is often left to encourage people to overtake him on standard roads and his success rate varies with the time of day. In the early morning, Businessmen and White Van Men come past the lorry at the first invitation. David uses his right hand out of the window to wave people past or he makes 3 flashes with his left indicator. A lot of the old A-Roads were 3 lane carriageways in the 1950’s and despite the large volume of white paint creating hatched areas or cycle lanes, the road surface is wide enough for vehicles to travel 3 abreast. David hogs the nearside kerb often using cycle lanes which have seldom any occupants on country roads and encourages people to come past. The Police are happy for David to do this, giving him a thumbs up once as they glided past on the A31 because David was using his initiative to reduce frustration. So before 0800 hours drivers are fearless on 3 lane roads and come past at speed despite an oncoming stream of traffic, but after 0800 hours timid drivers are most reluctant to come past and a queue quickly builds up behind the vintage lorry.
When a queue builds up behind the Leyland Beaver invariably the first car is always driven by ‘Little Miss Timid’ who won’t come past no matter how many invitations David makes. Some misunderstand the meaning behind his 3 flashes from his left indicator and assume that the lorry is about to turn left and brake suddenly causing a potential collision with the cars behind. Normally car number 4 or 5 in the queue has ‘Mister Aggressive’ behind the wheel who will attempt to come past oblivious to the amount of double white lines, blind corners or blind summits.
Three incidents on the road stick in David’s memory of interesting situations he has encountered:-
On his way to a funeral David was on the A303 Dual Carriageway travelling at 28 mph up a gentle slope. David saw in his wing mirror that a Snows Timber lorry had got out into the second lane early and was approaching him at approximately at 50 mph. No problems here, David thought as he got his right hand ready to apply his headlights to signify to the Snows Timber Driver that he was clear and that he could move back into lane one. However, as the Snows Timber Lorry got within 50 yards of the Leyland Beaver, David noticed that a white sports car was undertaking the Snows Timber Lorry and approaching at around 80 mph. A highly dangerous situation existed because David sensed that the white sports car driver would try to come between the Snows Timber Lorry and the Leyland Beaver and that there was a risk that the sports car would crash into either lorry. David steered his lorry into the kerb and kept going as fast as he could. The Snows Timber Driver must also have sensed the danger and he moved his lorry over with one wheel on the central reservation tarmac close to the barrier. The white sports car was in the Snows Timber Lorry Drivers blind spot, the area along the nearside of a lorry which the driver can’t see from his wing mirrors. So at 0645 hours on May 24th 2013 on the A303 Dual carriageway three vehicles were travelling abreast with only inches between them for a short period of time. David was shattered and feeling guilty that his slow speed was almost the cause of an accident which may have had at least one fatality. Why had the Sports Car Driver been so reckless? Did he feel trapped behind the Snows Timber Lorry getting out early into the second lane? The story doesn’t end there, however, because three miles on in a lay bye the White Sports Car Driver was squaring up to the Snows Timber Lorry Driver. The White Sports car Driver wasn’t the sharpest knife in the drawer because the Lorry Driver was built like a brick outhouse and there would only be one likely winner. 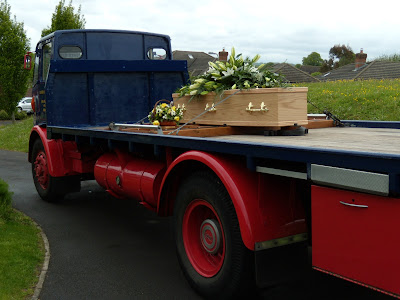 Coming out of one Winter’s afternoon after the last slot at Croydon Crematorium it was dark by the time the Vintage Lorry to and onto the A3. Following the rush hour the traffic died away on the A31 as the Leyland Beaver trundled towards . The traffic was very light on the A303 and virtually none existent on the A342 over Salisbury Plain. The absence of street lights meant that the stars were visible and in the total darkness all David could see was the beam of light from his Head Lights and the red glow from his Tail Lights. In checking his wing mirror David noticed that a car in the distance was approaching slowly at a speed not much faster than the Leyland Beaver. It reminded David of the scene in ‘Butch Cassidy and The Sundance Kid’ when they are being tracked through the night by a group of men on horse back holding torches. Robert Redford said to PaulNewman, ‘Who are these guys?’ and David had the same thought. The car came close to the lorry and David invited the driver to come past by the use of his left indicator, however, this didn’t produce a result. So David slid down his window, letting in the cold air, and waving with his hand, but the car still didn’t come past. The car was travelling too close to the lorry and David was concerned that if he had to stop suddenly for a Badger or a Deer the car would run into his lorry. No matter how much David tried to get the car driver to overtake the car would come past which was incongruous because no one else was on the road. The situation persisted for over 15 miles. Just before Stert there is a lay bye so David pulled in, fully expecting the car driver to come past him and continue its journey, but it didn’t. It pulled behind the Leyland Beaver and David was very mad. He jumped out of the cab and walked towards the car anticipating that that the driver would be some young person who had never driven at night before and would benefit from a 5 minute ‘tutorial’ at 2130 hours. However, when he got close to the car he was shocked as the driver was an elderly lady who could hardly see over the steering wheel. Before David could say anything, the old lady said, ‘I know that you want me to come past, but this A342 is a lonely old road and I feel more comfortable travelling behind you!’ David ascertained that the lady was bound for Devizes and invited her to follow him, provided she would keep 20 yards between the vehicles. David set off for Devizes with his ‘trailer’ in tow and signalled to the lady when she needed to turn off for her destination. 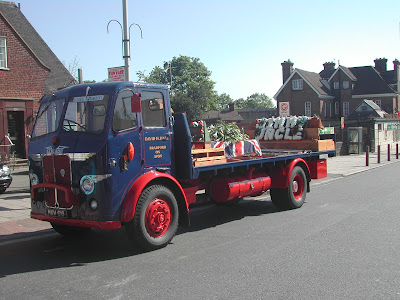 On his way to a Maidstone funeral, when David approached the village of Brasted, on the A25, he noticed that someone had used a cardboard sign to transpose the ‘R’ and the ‘A’, giving the impression that the village was illegitimate. As the Leyland Beaver entered the centre of the village David saw 5 boys looking menacing, sitting astride their Chopper Bikes, and he wondered if these boys were the perpetrators behind the sign change. Suddenly the biggest boy, who was apparently their leader, thrust his arm forward and the group of 5 Chopper Bikes advanced, swinging around alongside the Leyland Beaver. Before David could realise what was happening, the Leader was in front of his lorry with two riders either side, flanking the deck of the lorry at the mid point and at the rear. The actions of the boys mimicked a motor cavalcade with Police Motorcycle Outriders which is normally reserved for dignitaries such as Barak Obama However, it was highly dangerous having cyclists so close, especially the ones of the nearside who were confined between the lorry and the pavement with only inches to spare. David was relieved when he stopped at the traffic lights as at their Leader’s command the Chopper Bikes came past the lorry and raced off in a 1-2-2 formation down a side road. 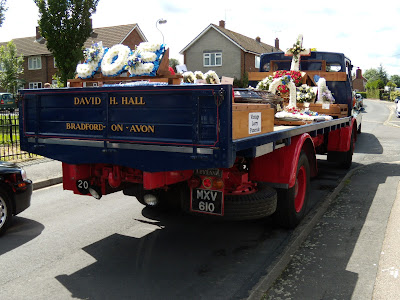