For reasons that will become evident, the names of the Funeral Director, their staff, and the location of the Crematorium have not been disclosed.
Vintage Lorry Funerals was booked for a South London funeral by a lovely Family who sadly believed that they hadn’t done enough for their Dad towards the end of his life and consequently they wanted to ensure that he had a great send off. David Hall’s wife was involved in detailed planning for the funeral at an early stage as there was no parking allowed outside the Funeral Home, which was surrounded by double red lines. Luckily internet research identified an area marked ‘loading only’ on part of the road in an adjoining street and after some involved discussions the local Council reserved the facility and reluctantly waived their normal charge. 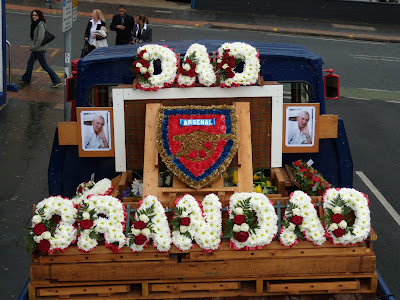 The Deceased had been an avid Arsenal Fan, with the ‘Arsenal Shield’ being the centrepiece of the display in which every Floral Tribute was red & white. So in the heartland of Crystal Palace Fans, David was loading Arsenal themed flowers, however, no derogatory remarks were made by passersby. David took pictures and sent them to Arsenal F.C. who featured the funeral in a Match Day Programme and it is understood that Arsene Wenger was very happy about the respect shown for his club south of the river.
David had longer than usual to take pictures because the three limousines that were booked to follow the 1950 Leyland Beaver were running late. It was Friday afternoon, the funeral was booked for the last slot at the Crematorium, however, the limousine drivers were on their 4th job of the day and were delayed. In these situations David doesn’t get stressed out and remembers one of his old Dad’s sayings, ‘Don’t worry about things that you can do nowt about.’
Eventually the limousine drivers arrived, the coffin was loaded and although 45 minutes had originally been allocated to travel from the Funeral Home to the house, only 15 minutes were left. The task looked impossible to everyone involved and the mood amongst everybody was very low.
The female Funeral Director, who had worked with David before, paged the cortege onto the busy main road, turning right across two lanes of oncoming traffic and into the right hand lane as a right turn was required at the traffic lights one hundred yards down the road. As David approached the lights he noticed that there was no specific right turn filter light and given the high volume of oncoming traffic he would have to wait until the light went from green to red and then move across the two lanes, this type of operation has been sanctioned by Police in South London.
However, as David waited at the traffic lights showing a red light he knew that waiting for a gap would loose further time that he didn’t have in the first place. He looked across the yellow lined box junction towards a Bus in the first lane and a car in the outside lane alongside the Bus, and he put the Leyland Beaver in a high gear. When the light turned green, David let out the clutch and the 1950 Leyland Beaver shot out into the oncoming traffic. The Bus Driver realised what David was doing and stopped, however, the car alongside the Bus didn’t stop and a collision seemed imminent. The Funeral Director, sitting in the passenger seat, was petrified, but luckily the car stopped and David continued across the boxed junction, seeing in his wing mirrors that the three limousines had followed the Leyland Beaver.
Near the Crystal Palace ground there was a steep inclined road with cars parked on the left hand side of the road. With a stream of cars coming down the hill towards the Leyland Beaver, the sensible thing to have done would have been to wait at the bottom of the hill until a gap appeared in the traffic. However, David sensed that the road was just wide enough for three vehicles and he put his foot down and the Leyland Beaver shot up the hill doing 28 miles per hour. Experienced drivers coming down the hill got over and David passed by with only inches to spare. Inexperienced drivers panicked and some mounted the pavement to get out of the way.
David pulled up at the house 30 seconds earlier than planned with the Family oblivious to the problems and the journey that was originally planned for 45 minutes was actually achieved in 14.5 minutes. David got out of the cab as if nothing had happened to see if any extra flowers were at the house. The Lead Driver from the first limousine didn’t go to the Family as normal but rushed towards David and gave him a huge hug, ‘I ain’t never seen assertive driving like that.’ 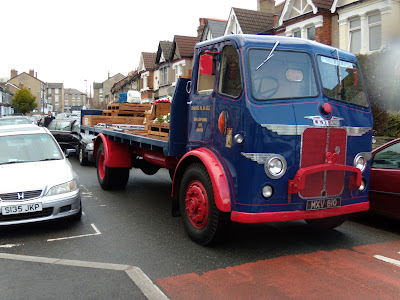 Leaving the house the Funeral Director was using her Sat Nav and said to David, ‘Tom, Tom says turn left.’ David said, ‘Dave, Dave says straight across,’ cognisant that his detailed research had highlighted that taking the second left rather than the first left was advantageous due to wider streets. 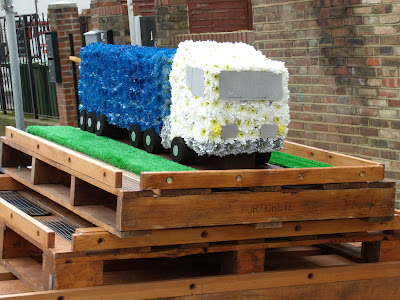 On the way to the Crematorium the Lead Driver in the first limousine flashed his lights repeatedly signifying that David should stop. Unfortunately the 3D Lorry and Trailer Floral Tribute which was ever so lifelike was becoming more real than expected in that the ‘Cab’ was beginning to tilt as if the ‘Lorry’ was being serviced. The Lead Driver asked David, ‘How are we going to fix this?’ David said, ‘No problem’, taking out a length of green wire and two small polystyrene sheets from his tool box. The ‘Cab’ was straightened and secured in no time and the Lead Driver said, ‘You have done that better than Macgyver!’
As the cortege entered the Crematorium David sensed that something was about to happen as before the limousines had come to a stop the doors were being flung open and mourners were racing to confront a group of people all holding yellow flowers. There were fists flying, the language was atrocious and that was only the women! The people with the yellow flowers started to throw individual stems towards the coffin on the deck. One of the mourners instructed David to climb up onto the deck and stop the yellow flowers landing amongst the red ones. The yellow stems rained down like French arrows at the Battle of Hastings and David was struggling manfully to catch each one in flight. Onlookers oblivious to the dangerous and inflammable situation may have thought it was like a scene from ‘It’s a Knockout’ which was on TV screens during the 70’s & 80’s.
David was astounded when the diminutive female Funeral Director got between two burly men and begged them to stop fighting. She then requested the people with the yellow flowers should not enter the chapel and respect the wishes of the mourners. Then for the first time in 10 minutes order was restored and silence prevailed. David gathered up the yellow flowers into a nice bunch and thought that he would take them home for his wife. However, David’s good intentions were undone in 10 seconds when one of the mourners stamped on the flowers. David learnt that the Family lived at some distance from the Deceased and it was alleged that some of the people with the yellow flowers had developed an unacceptable relationship with the Deceased and it was also alleged that some of the Deceased’s funds may have been misappropriated.
The Lead Driver from the first limousine came up to David and shook his hands saying, ‘Thank you for all your efforts today, we were in a huge hole but the actions you took saved the day and saved our bacon!’
Posted by David Hall at 11:16