After 4 years of undertaking funerals with his vintage lorry, David Hall did a strategic review and determined that a large proportion of his business had arisen from brick built terraced houses rather than country cottages made from Cotswold Stone. David had previously worked in the Newport area and had noticed the number of Haulage Companies and the preponderance of terraced streets. Consequently David sent Marketing Packs to Funeral Directors in Newport and surrounding areas which in time resulted in 40% of Vintage Lorry Funerals business during August & September 2014.
David’s Daughter lives in Cardiff and it is a journey that he has undertaken many times in his car and the 63 miles can take between 80 and 90 minutes using the Second River Crossing. For most Welsh Funerals the key strategy is to get past Newport before 0700 hours and David gets up at 0400 hours, leaving his Bradford-on-Avon base at 0445 hours. His route involves going north on the A46 and using the A432 to cut through Chipping Sodbury and Yate towards the Old Severn Bridge. The 1950 Leyland Beaver normally arrives at the Toll Booth at 0600 hours and the Bridge Attendant is pleased to speak with David. The Old Severn Bridge is not often used by normal traffic and the Bridge Attendants in the Toll Booths often see very little traffic through the night. The Ladies in the Toll Booth are interested in the role David performs with his lorry and want to start a conversation and David told one lady, ‘I would love to chat with you a little more but I’m off to do a funeral in Cardiff and I must get past the Coldra before 0645 hours.’
Coming off the M48, immediately after the Old Severn Bridge, David takes the A466 north to Chepstow before joining the A48, the iconic road from the 1950’s that was replaced by the M4. Along the level sections of the A48 the Leyland 600 engine sounds like a sewing machine which is very similar to John McNally’s guitar in The Searchers 1963 hit ‘Sweets for my Sweet, Sugar for my Honey,’ The Leyland Beaver normally gets to the Coldra roundabout on the east side of Newport by 0630 hours and David often looks up to the bridge above the roundabout to see the traffic on the M4 heading westwards getting denser by the minute. David then takes the A48, which runs on the south side of Newport, which is a Dual Carriageway with minimal traffic lights and roundabouts. At 0645 hours only lorries use this road and the traffic is light with car drivers always gravitating towards the M4, which soaks up traffic like a sponge.
It is around 0655 hours when David stops at the Esso Service Station at Carlton for his paper and at 0700 hours the vintage lorry is on the A48 going under the A470 intersection or trundling down Newport Road in Cardiff.
So a car travelling at 70 miles per hour on the M4 achieves the journey in 90 minutes and one would expect the Leyland Beaver with a top speed of 32 miles per hour, travelling on A Roads, with traffic lights and roundabouts, should take over twice as long as a car. But it doesn’t. The lorry regularly does the journey to Cardiff within 135 minutes and there is no logical explanation why. Congestion on the M4 during peak periods has encouraged The Government to look at a new express road on the south side of Newport, however, David reckons they have already got one, it’s called the A48!
Three memorable funerals in South Wales are contained in this article. 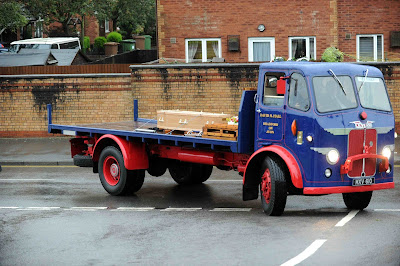 David always tries to stay off the M4 with his lorry, however, sometimes the geography in South Wales with steep hills and deep valleys means that the use of the M4 is unavoidable, like the journey from Risca to Cwmbran Crematorium. Whilst waiting outside the Church in Risca for the service to be completed, David Hall was worried about travelling on the M4 at 30 miles per hour with cars thundering past at 70 miles per hour and beyond! David looked up and couldn’t believe his eyes as a Police Car pulled alongside his lorry. The Policeman told David that the Police Car would lead the cortege from the church, through the village and on the roundabout before the M4 the Police Car would go around it twice and position itself behind the lorry. As the Leyland Beaver trundled down the slip road the Police Car positioned itself at 30 miles per hour outside the lorry in lane one, forcing all the cars on the M4 into the outside lane. The Police Car then travelled alongside the Leyland Beaver until the next junction when the lorry took the slip road, the Policeman saluted David and sped off. David is not aware that a Police presence was officially requested and apparently it was a case of a concerned Policeman acting on his own initiative. 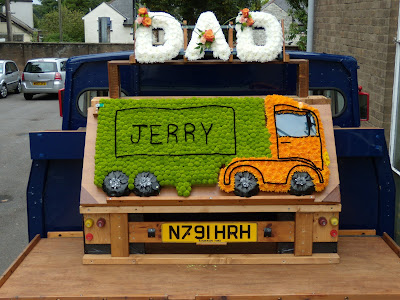 One feature of Cardiff houses is the narrow back alleys that are used to access the rear of properties. When a funeral was arranged from a Funeral Home with a narrow rear access, the Funeral Director organised parking within St. Mark’s Parish Church on the busy A470 North Road. Three days before the funeral David was concerned about the width of the back alley behind the Funeral Directors, although at that stage it was never envisaged being used. Andy Lawrence, who designed and created a garden for David’s Daughter has remained a close friend. At 1920 hours David phoned Andy’s mobile and asked him to check out the width of the back alley behind the Funeral Directors the next time he was in the area. At 1950 hours Andy phoned David to say that the width of the alley was 9 feet. David asked, ‘Is it 8 ft 9 inches, 9 ft 3 inches or 3 paces?’ Andy replied it was 3 paces, however, he warned David about telegraph poles which reduced the width. He also thanked David for getting him out of the house whilst ‘soaps’ were monopolising the TV screens. On the day of the funeral David joined the A470 at 0720 hours just as traffic was starting to build. Turning left into the tight Church gateway necessitated David moving into lane two with his left indicator flashing. Nine car drivers comprehended what David was attempting and patiently waited in line behind the Leyland Beaver. As David approached the narrow gate, just as the vintage lorry was about to commence turning, David sensed that a car was about to come past him on his nearside and he braked. At that moment a young lady shot past him, ear plugs in place, listening to music, totally oblivious to all around her. After loading the flowers in St. Marks car park the Funeral Director saw that if David could reverse down the back alley to receive the coffin, he could find another job for his hearse. So Andy Lawrence’s research was of paramount importance and David inched his way down the alley keeping his eye out for the telegraph poles, which fed telephone lines to a number of locations. 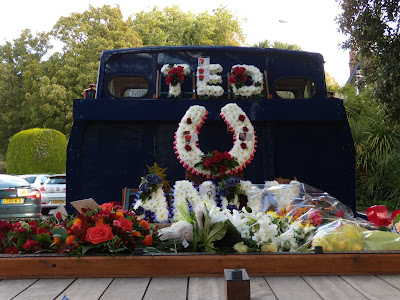 For the funeral of a man who loved horses David created a facility so that a ‘Horseshoe’ Floral Tribute appeared to float. Whilst waiting on the roadway outside Thornhill Crematorium a passerby knocked on the passenger door window. The gentleman said he was at school in 1952 when he saw a Leyland Octopus going up the hill. On seeing the wing embellishments glistening in the bright sunlight he was smitten and during the 1950’s he always looked out for Leylands with the wings. He thought it was unbelievable that 60 years on he could see a Leyland Beaver on the same road, glistening in the sunlight and he told David that they would meet again one day.
Posted by David Hall at 03:16 No comments: