In the funeral world there are no predictable trends, business is brisk one week and the following week can have low activity levels. Vintage Lorry Funerals’ business profile is no different with 3 funerals in one week and the next one being 3 weeks away.
So the prospect of two consecutive funerals being in Wolverhampton, both ending at Bushbury Crematorium, both working direct for a Family and both having a ‘Teddy Bear’ Floral Tribute as a focal point in the display, seemed unreal. But it happened in March 2015. 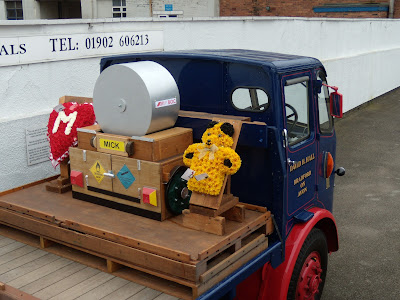 The first funeral was for a former BOC Gases Tanker Driver whose main Floral Tributes were a 21 inch ‘Heart’ and a 21 inch ‘Teddy Bear’. Although David Hall knew that these would be lovely Floral Tributes, their very different shapes would mean that placing them side by side in front of the coffin would not have looked appropriate due to a lack of symmetry, which is a fundamental part of all Vintage Lorry Funerals flower displays. The solution that David came up with was to create a wooden tanker between the two Floral Tributes.
Around the same time, David had attended the Classic Commercials Enthusiasts Day at Malvern, where each year he builds a wooden Theme appropriate for a Lorry Driver’s Funeral to show the public what is possible should they decide to use his services. Fortuitously on March 5th 2015 on the deck of the 1950 Leyland Beaver was a Theme for an ESSO Petrol Tanker Driver, in line with the agreement made with the Show Organiser, Jason Lunn, the previous year.
Wendy Webb was delighted with David’s idea for her husband’s final journey and the task that David set himself was to transform his generic tanker Theme, which had previously appeared to be carrying fuel in Gosport and Malvern, and Milk in Tooting and Frome, into a BOC Gases Tanker.
David consulted with Nigel Barnes at BOC Gases and he was very obliging, sending detailed pictures of both the outside and the instruments inside the Control Compartment. David thanked Nigel for his help and the quality of the detail he had sent, however, David explained that he was only trying to create a replica, not a working model!
It was agreed that the Leyland Beaver could be parked undercover with the Funeral Director the night before the funeral and David provided the measurements of the 65 year old lorry. However, when David saw the space available he was concerned, especially when he learnt that the length had not been measured accurately, in that a tape measure hadn’t been used and the length was just paced out. David was livid on this Sunday afternoon around 1700 hours as he could have used a suitable facility with Kwik Fit just down the road, however, this had closed an hour ago. Luckily the Leyland Beaver just fitted the space at the Funeral Directors with less than one inch to spare.
There was a concern about the access into the Church so David was taken to meet the Clergyman who everyone addressed as Father, as this was a High Church of England facility. David joked with the Clergyman being called Father and asked if the coffin would be in church the night before the funeral. The Father was brilliant in that he had gained permission for the Leyland Beaver to go onto the driveway of the house opposite the church entrance. David shook the Father’s hand saying, ‘Thank you Father, you have gone farther than most people would have gone.’
The pictures of Michael Webb’s funeral were sent to BOC and they went around the Linde Group like wildfire. David was invited to submit an article which he agreed with Wendy to the BOC Staff Magazine.
David was amazed when he checked the Vintage Lorry Funerals website the day after Michael Webb’s funeral to find an enquiry from the Daughter of a Wolverhampton man who had just passed away. She explained that Roy Quinton would be the Funeral Director whose Funeral Arranger in Bushbury had seen the 1950 Leyland Beaver in action, on its way to Bushbury Crematorium the previous day. 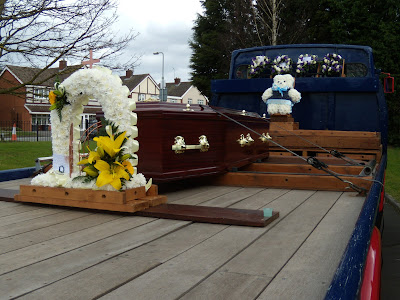 David had noted on his way back from Michael Webb’s funeral that the return leg of the journey was 5 hours and if an opportunity for an afternoon funeral arose then he would attempt to do the funeral within a day run from Bradford-on-Avon. However, he never dreamed that this would be his next funeral.
Doing Wolverhampton and back within 10 hours driving wouldn’t be easy and required a lot of detailed planning. David operates his lorry like a current day Lorry Driver who is allowed to extend his daily driving limit to 10 hours twice a week. The legislation also allows a working shift to be extended to 15 hours twice per week.
Getting up at 0400 hours and leaving at 0445 hours meant that the Leyland Beaver was into Gloucester by 0630 hours, missing the rush-hour. In Tewkesbury the traffic was still light and the volume of cars on the road multiplied as the 65 year old lorry moved onto the Dual Carriageway sections of the A46. David took a 45 minute break at Alcester Services and let the bulk of the rush-hour traffic go. By the time he got onto the A441 into Redditch most people had got to work and the only extra traffic was due to the tail end of the school run.
By adopting this strategy the vintage lorry rolled into the space behind Roy Quinton’s Funeral Home at 1015 hours, having made the journey from Bradford-on-Avon within 4 hours and 45 minutes driving. As the Funeral Home, House, Church and Crematorium were all very close by, David was happy that he had created a 15 minute buffer that may be required on the return journey in which he couldn’t expect traffic to be so light.
In the Bushbury area of Wolverhampton the local road network interfaces with the railway and a number of low bridges exist. David had undertaken research and determined that he would have no problem with the height restriction under the arches, however, the width of the approach roads was a concern.
Scott Quinton introduced himself and asked if he was aware of the low bridges and the problem with one near the church being closed, which was forcing higher volumes of cars through the other bridges. Scott suggested that David should go with one of his men and checkout the best way around the problem as the tight timescale between the Church and the Crematorium meant that any hold ups would be disastrous. David thanked Scott for his help saying, ‘Often when a Family pay me direct, the Funeral Director has no interest in providing strategic information.’ Scott replied, ‘Dave, the only thing that matters is that the funeral goes well and that the Family are happy.’
As this was a Catholic funeral the coffin was already in the church when David arrived, as instructed halfway through the service. The coffin was loaded in front of the whole congregation and those close to the lorry were amazed at the smooth operation of the coffin as it was slowly rotated on the deck. David secured the ‘Gates of Heaven’ Floral Tribute in a way that depicted the Deceased had just passed through the Gates of Heaven and this image meant a lot to the Family. David started to apply tension to the ratchet straps when he was showered with Holy Water from the Priest. The Family asked for photographs to be taken at the church and David operated discreetly and patiently. The weather was deteriorating during the day, however, it never rained whilst Frank Gibney was on deck of the vintage lorry, but as soon as the lorry was beneath the porte cochere at Bushbury the heavens opened.
Kim Deacon, Frank’s Daughter had asked for David to take a picture of Scott and his men in front of the lorry and David did as he was asked despite the horrendous rain. 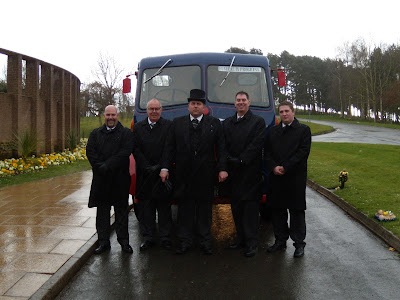 David took shelter in his cab, eating his sandwich as the service took place. Kim braved the storm to thank David and Kate’s Mum shook his hand saying, ‘I love the way the things you do.’ The way she said it, it was very similar to The Temptations 1965 hit record, ‘Ilove the way you do the things you do.’
Posted by David Hall at 03:39