Going back to Scole


David Hall and his wife lived at Lowestoft in the late 1970’s and David’s memories are of the large apple stores and windmills, including a magnificent one near Scole. It has a rotating top which allows the sails to move to take the best advantage of a change in wind direction. One day David and his wife were climbing up the staircase inside this windmill and then stepped out onto the top turret balcony to get a wonderful view of the flat East Anglia countryside. David turned and stepped back into the windmill and just as his wife was about to follow him the direction of the wind changed. David’s wife went for a ride, whilst he was laughing from inside the structure and it is a moment that they will never forget. 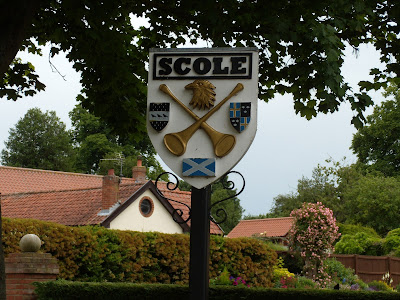 On Friday June 19th 2105 David and his wife were having coffee within Jolly’s Tea Room in Bath when David’s mobile rang. Tim Simmons explained that his Dad had just passed away and since he had once owned a Heavy Haulage Company his Family were interested in using David’s services.
David had undertaken a funeral in Great Yarmouth some eight years previously which was featured prominently in local newspapers and Mrs. Simmons, Tim’s Mum, had kept a copy but never told anyone that she had it. Tim explained that he and his Mum wanted to use the 1950 Leyland Beaver, however, his younger Brother wanted to spend time repairing his Dad’s old Diamond T Lorry for his Dad’s final journey. David’s advice was that if the Family didn’t use his lorry then they should just use a hearse as on the day of the funeral Tim should be focused only on looking after his Mum. He should not be worrying about his Dad’s old motor which hadn’t been out of the barn for some time.
Tim rang David on the Sunday evening as promised and booked the Leyland Beaver for Friday June 26th. On Sunday evening David’s wife looked for suitable facilities around Rosedale Funeral Directors in Diss which could store the 1950 Leyland Beaver overnight. After 20 minutes research there was an excited shout in the computer room as David’s wife had found Waterfield & Son in Scole, only two miles from the Funeral Director who had a tarmac resurfacing company and they had restored a 1956 Albion Claymore Tipper, which was the first lorry that they ever had. Also within walking distance were a hotel and a paper shop, so David’s wife had cracked the problem.
Some people think that people from East Anglia are unfriendly typified by David Jason’s story about when he was lost in his car near Bury St. Edmunds just after WWII. Apparently David shouted to an Old Man cutting a hedge, ‘Do you know the way to Bury St. Edmonds?’ The Old Man just continued to work and never responded so David called, ‘Hey John, do you know the way to Bury St. Edmunds?’ The Old Man put down his tools and walked across to the car and enquired, ‘How do you know my name is John?’ David said, ‘I’m a good guesser.’ The Old Man said, ‘Well then, guess your way to Bury St. Edmonds!’ as he turned away and continued to cut the hedge.
Gary Westfield couldn’t have been more helpful, he even offered to allow the coffin to be transferred onto the lorry as the Funeral Director had a narrow driveway. He told David that his men would clear space to put the Leyland Beaver undercover the night before the funeral. He asked David if he could find his way to Scole and David told Gary about him and his wife’s frightening experience in the windmill near Scole.
David left Bradford-on-Avon at 0500 hours and was the first vehicle to fuel at Tesco Tetbury as it opened at 0600 hours and the derv price was 119.9 p.p.l , the cheapest that David would see in the next 150 miles. However, coming up the A143 just after Bury St. Edmonds he couldn’t believe his eyes for at a small fuel station the derv price was 117.9. It was a very tight squeeze to get the lorry next to the pumps, however, to save 4p per litre it was worth trying to put a quart in pint pot. As David paid for the fuel he asked how the fuel was so cheap. The young girl said, ‘You’ve landed here on our cheap fuel day.’ Thinking it was a bit like the B&Q facility for OAPs, David said, ‘Have you got to be an OAP to get this discount?’ The young girl laughed saying, ‘You are welcome to it, and your lorry looks wonderful.’
David arrived at the Waterfield yard around 1400 hours, having completed the 204 miles in 7.25 hours driving. Staff in the yard were expecting the 1950 Leyland Beaver and the Yardman asked David to undertake a tricky manoeuvre as he reversed into the empty shed around a lorry with cars only inches away. When David pulled the engine stop button he said to the Yardman, ‘Have I passed the test?’ 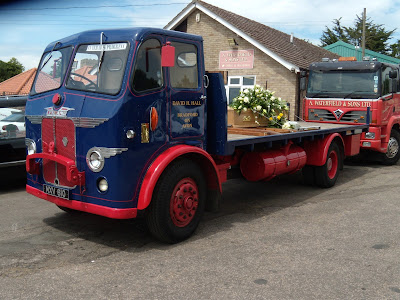 It was the first time that David could walk from where the lorry was parked to his accommodation and it was comforting to know when he was eating his supper that the coffin would be transferred onto his lorry in the Waterfield yard, making this a total Scole solution. He didn’t have to rush off in morning, enabling him to work into the early hours on Saturday morning, using the full extent of a 15 hour shift, if required.
The Deceased lived in a bungalow in the middle of the countryside with uninterrupted views in all directions. The funeral service was in the late afternoon and although David was keen to make tracks he had promised to spend some time with the Widow after the service. Leaving the cemetery at 1600 hours the Leyland Beaver did well on the country roads, getting cars past on the former 3 lane road between Diss and Bury St. Edmunds, and was on the A14 dual carriageway by 1700 hours. It was Friday night and there were a lot of people on the roads, however, there was also a number road closures from 2000 hours for night tarmac operations at Huntingdon and Milton Keynes. David knew he could beat the curfew at Huntingdon but he would need help on how to avoid the problems at Milton Keynes. Mission Control, David’s wife, had done some research and found a good back road going through Bedford, Flitwick and Dunstable before going east via Aylesbury to Oxford. David’s wife provided a series of landmarks, and stressed special attention was required due to the lack of a sign-board at the roundabout over the railway at Flitwick. Tramping on during this warm evening, David missing the right turn at the roundabout but immediately knew he was wrong. He stopped outside the Oak Public House and asked a man, who was speaking on a mobile phone, directions for Dunstable. The man, still talking on the phone, tapped on the window of the pub. An Old Man came out saying, ‘Two rights and a left and Dunstable is sign boarded from there. If I had a (expletive) tenner for each time I have had to leave my drink due to the lack of a (expletive) sign on that (expletive) roundabout I would be a (expletive) millionaire.’ David thanked the man but thought it was like a situation portrayed in Gerry Rafferty’s ‘Get it right next time.’
David got to Dunstable, came back up the A5 and then turned left onto a road he had never been on before, the A505 to Leighton Buzzard. The road was exceptionally wide, wide enough for 4 cars across, a good surface and street lights which provided excellent visibility and it was around 2145 hours. It was the same Friday as Glastonbury, however, contrary to popular belief not all young people were at Worthy Farm Pilton, in Somerset that night. David saw no vehicles at all in front of him but he looked in his wing mirror and saw a line of 5 cars approaching the vintage lorry at speed. Each car had darkened windows, air dams on the front, side skirts that almost touched the ground, and air spoilers mounted on the boot lids. These boys didn’t need any invitation to come past the old lorry trundling along at 30 miles per hour. As they thundered past they filled the fours lanes and took off reaching speeds probably in excess of triple the speed of the 65 year old lorry and the road became a racetrack. Thankfully everyone reached the end of the long road safely.
It was approaching 2300 hours when the Leyland Beaver joined the A40 just before Oxford and the motorists trapped behind the lorry were vocal in their protests as they came past on the next stretch of dual carriageway. David wears ear-defenders to protect him from the noise from the Leyland 600 engine, however, they also shield him from the abuse he receives. Finding an empty lay-bye to let people past is never easy with many populated with drivers sleeping in their Trucks, bottomless potholes or filled with mounds of tarmac for the next night operations.
Just after Burford David turned left onto the B4425, a country road to Cirencester and all the cars behind the lorry suddenly disappeared. David had the road to himself and there was a full moon. On the back road he saw a Fox and two Barn Owls. It was 0130 hours when the Leyland Beaver trundled into Bradford-on-Avon and David reversed into his garage just before the end of his 15 hour shift limit expired. Over a cup of tea he told his wife about the journey home and she said, ‘You should have turned right at the roundabout over the railway line in Flitwick as you were told!’ David thought ‘Oh dear, this is like being back to scole (school).
Posted by David Hall at 02:01 No comments: