Although Vintage Lorry Funerals uses the Marketing Phrase of ‘Bringing some colour to a dark day’, sadly the events around some funerals makes this aim impossible and here are three examples where the background to the funeral had an emotional effect on David Hall.
David was contacted by a Bristol Haulage Company to take one of their Drivers on his final journey but the date could not be finalised as their Driver had died abroad. The Deceased was divorced and had taken his four sons on holiday with him to Portugal. Tragically on the second night of their holiday the Deceased collapsed and passed away in front of his boys, whose ages ranged from 6 to 16 years.
The Haulage Company provided Tractor Units to take the mourners to the Funeral Directors and thence to Westerleigh Crematorium. The picture below was taken in Downend Bristol and it captures the moment when the four brothers naturally arranged themselves in age order alongside their Dad’ coffin. 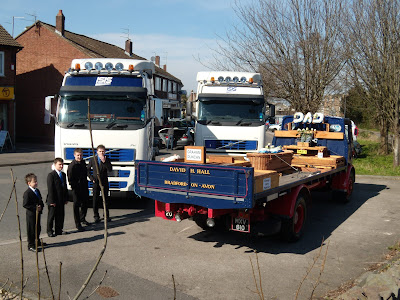 The youngest person to travel on the 1950 Leyland Beaver was a 13 year old boy from Bristol who died from San Filippo Syndrome, a genetic disorder that limits the life of a child to 14 years as a maximum. David met the Family at their home and drew out how he could arrange the Floral Tributes on his vehicle so that everyone was visible. As the Family did not have a computer David agreed to prepare a Photograph Album of all the pictures he would take.
A number of events occurred on the funeral day which touched David emotionally. Whilst sitting in his lorry on Filton Road in the early morning before the funeral, children were on their way to school. One group of girls approached the lorry and a blond haired young lady smiled at David. As the group passed by the front of the cab, David heard a gentle tapping knock on the passenger side door. David climbed out of the cab to investigate and the blond haired young lady stepped forward and introduced herself as a cousin of the Deceased and she reminded David that she had met him at the Family home. She then asked David to climb up onto the deck and explain how each Floral Tribute would be positioned.
Whilst David was reversing down the street towards the house, school children from the same class as the Deceased stood to attention on either side of the road, forming a guard of honour. 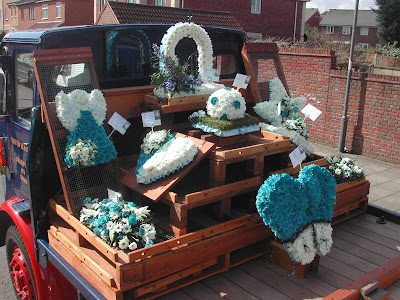 When David was loading the Floral Tributes he noticed that each Flower Card contained a picture of the Deceased. Having loaded over 20 Floral Tributes, each with the young lad smiling at him, David felt very sad for the parents who had also lost the Deceased’s sister to the same genetic disorder the previous year.
Vintage Lorry Funerals was chosen to take a 32 year old Electrician on his final journey after he had lost his life beneath his own car. It is believed that he was struggling to replace a gearbox from his car which came off its axle-stands causing him horrendous injuries and he passed away two days later.
The Deceased’s Mum was looking at the range of vehicles available in the Funeral Director’s Pack and she felt that the 1950 Leyland Beaver was most appropriate not only because her Son was interested in ‘anything with wheels’ but also because following his accident she didn’t want his coffin enclosed.
The Deceased left a young wife and two young children, a boy almost 3 year old and a girl almost 1 year old. During the service the young mother had to attend to her children’s needs with David and the Funeral Bearers doing all they could to provide some privacy. It was pitiful to see in the cemetery two young children wandering around the headstones oblivious to why they were there. This prompted David to write an obituary article in Heritage Commercials, and whilst these articles are normally written for the benefit of the widow, in this case it was written primarily for the two young children so that they would have something by which they could remember their Dad. 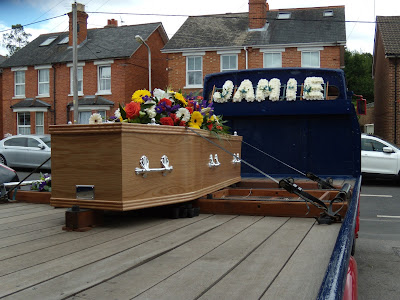 David is always professional and never lets any emotions show on the day of the funeral, however, he often thinks through what happened on the day, evaluating if he could have done anything more to help the Family.
Posted by David Hall at 03:39 No comments: