A Cardboard Coffin in Snodland


A family in Snodland contacted David Hall after their mother had passed away. She had been a Lorry Driver for most of her life and it was her expressed wish not to have her final journey in a black hearse.
Her other wish was to be cremated in a cardboard coffin and she bought a coffin from Greenfield Creations when she was in the final stages of her life. Her family helped her to decorate the coffin with Butterflies.
When David Hall was told about the cardboard coffin he spoke to Greenfield Creations and voiced his concerns over the rigidity of a cardboard coffin and whether it would stand up to David’s handling techniques as the coffin is loaded, turned, positioned and secured. David sent a number of photographs of himself in action on the deck during a funeral that was televised on BBC 1 Wales and Andy Honeywell offered to supply David with a coffin and let him try it out in his garage.
David and one of his Support Team loaded the cardboard coffin with sufficient 25 kgs bags of Water Softener Salt to replicate the Deceased’s weight and to both their surprise there was no deflection in the plywood base at any stage. A wicker coffin will deflect, bending as much as 1 inch over the length of the coffin if it supported only near the ends. However, the Greenfield Creations cardboard coffin operated like a standard coffin as it didn’t deflect at all. Two concerns remained however, regarding the securement and how to keep the cardboard coffin dry. David normally uses ratchet straps to secure the coffin, however, this action would have been inappropriate and would have damaged the coffin as soon as any tension was applied. The solution to both problems was the use the use of David’s transparent sheet. 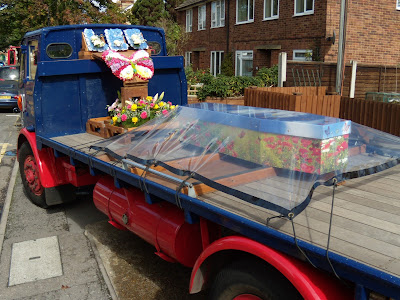 The Funeral Director had limited parking facilities and the Family contacted Newton Transport to provide space in their yard for David to load the flowers. Due to Newton Transport’s night loading operation it was not possible for David to park the 1950 Leyland Beaver undercover with this company so David contacted Mid Kent Vehicle Services, a garage that specialises in cars & vans. The manager Phil was most helpful offering David space for his lorry and took him to the Premier Inn at night and collected him in the morning. Phil is a most diligent guy, he even left a note on David’s seat to remind him to collect his sandwiches from their fridge.
David was concerned about loading the cardboard coffin from the Funeral Directors where there was no protection from the elements. He knew the coffin would be safe once it was beneath his sheet, however, what would happen if a shower occurred whilst the coffin was being wheeled out from the Funeral Directors facility. David telephoned Bob Osborne of Newton Transport and expressed his concerns over bad weather. Bob explained that his warehouse activities peaked during the evening, however, if required during the day he could make space available, withdraw his men from the location and enable the coffin to be transferred from the hearse onto the lorry undercover. 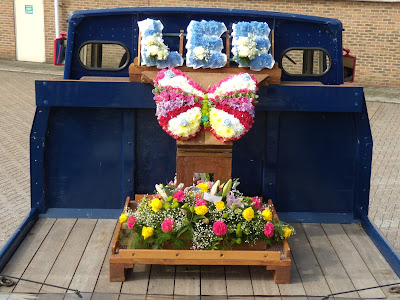 The Floral Tribute layout involved a front display depicting that a ‘Butterfly’ was leaving a Coffin Spray on its way to ‘LEE’. The rear display involved a 3 dimensional ‘Frog’ hovering over ‘MUM’ as Lee loved both Frogs and Butterflies. 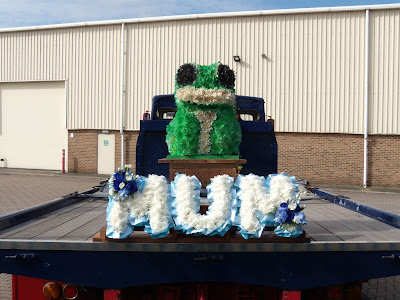 During the morning the flowers were delivered to David and he assembled the display without any problems. The ‘Butterfly’, which was made by a different Florist, had not yet arrived so David went to get a newspaper. Whilst he was away the ‘Butterfly’ was delivered and to keep it safe Newton’s staff put it onto a pallet and located it into the warehouse. David returned and was oblivious to what had happened and rang the Florist, who stressed that it had been delivered. The ‘Butterfly’ Floral Tribute was to be the centre piece of the display but it was nowhere to be seen and David was getting concerned. He went across the yard and spoke to Bob Osborne who said, ‘Don’t worry Dave, our blokes booked it into the warehouse!’
David let the Florist know that the ‘Butterfly’ was safe and she asked him to send her a picture of the Floral Tribute once it was installed into the display. David said that he would take a picture and email it to her when he got home. She was upset that David couldn’t take a picture with his camera and send it immediately. David said, ‘Cameras are for taking pictures and phones are for phoning.’ 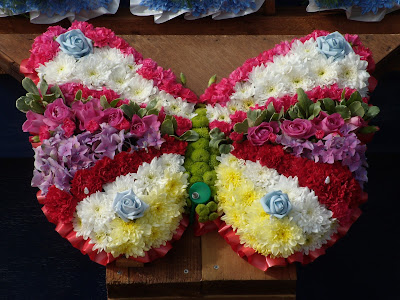 At lunchtime the sun shone and the Newton Transport safety net wasn’t required, however, David will never forget the kindness shown by Bob Osborne and his staff.
Whilst the lorry and limousine were waiting outside the Family home a young boy on a bicycle approached David and bombarded him with questions.
‘Why is your lorry in my street?’
‘Who has died?’
Where is she now?’
‘Can I see her?’
He didn’t understand what David meant when he said that the coffin was sealed. The little boy asked David if he could see inside the cab of his lorry, however, the little boy accepted that it was not appropriate and that dignity must prevail over being inquisitive. David made the young boy promise that he would stay by his bicycle on the pavement until all the cars had left the street.
The Leyland Beaver performed magnificently going from Blue Bell Hill Crematorium to Sutton Scotney Services on the A34 in 4 hours, taking a route to bypass the rush hour traffic at Guildford. David arrived home at 2330 hours and his wife immediately downloaded the pictures from his camera. The Husband of the Deceased had insisted that David should send a ‘home safe’ text, however, David did one better sending the pictures at the same time. David always tries to exceed expectations.
Posted by David Hall at 05:18