In October 2015 Vintage Lorry Funerals undertook 3 funerals in 4 working days, Marston Green (Thursday 8th), Wantage (Monday 12th) and Walsall (Tuesday 13th).
The Marston Green funeral was for a former Haulage Contractor whose wife went into Franklin & Hawkins funeral home and booked a standard hearse for her husband’s funeral. However, when she was getting into her car she noticed the picture of the 1950 Leyland Beaver in the window. She then went back inside and changed her arrangements as she immediately knew the vintage lorry would provide a fitting final journey. 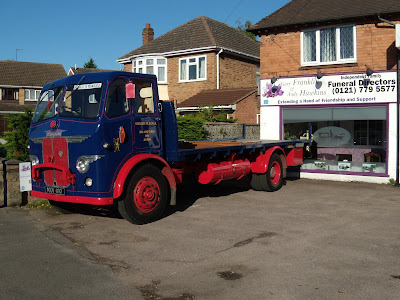 The Wantage funeral was initiated by the Family of a man who bought and sold classic cars and his Daughter rang David directly before contacting any Funeral Director. David was advised that the Family’s Floral Tributes would be small in size, however, distant relatives had clubbed together and had arranged for a ‘Spanner’ and ‘BARRY’ to be created by the same Florist, who was an amazing help. David provided the dimensions of his ‘nut’ and the Florist cut out the oasis sheet so that the ‘Spanner’ would fit the ‘nut’.
The Marston Green funeral involved a minimalistic approach and David was evaluating how to display the ‘BARRY’ and the ‘Spanner’ prominently at Wantage when the telephone rang. It was an enquiry from a Coventry Funeral Director and David provisionally arranged to park the Leyland Beaver in their garage overnight prior to the funeral. Sadly the Family decided that the cost of the lorry was beyond their budget and David was disappointed but relieved because the flowers for the Coventry funeral may have meant David working through the night, dismantling one display and assembling the next one. Within 30 minutes the telephone rang again and it was Roy Quinton Funeral Directors in Walsall with an enquiry also for Tuesday October 13th that involved an early morning funeral. That evening David spoke to Sean Hayward, Managing Director of Haywards of Walsall, a company that operates 85 vehicles from their base in Portland Street and a location in Yorkshire. Sean has known David for over 20 years and Sean said that if David got the funeral Haywards would lay out the red carpet for the Leyland Beaver. The following day the Walsall funeral was confirmed and David rang Sean to explain about his need to work on the deck late into the evening on the Monday night. The Roy Quinton Funeral Arranger was immediate in finding out about the flowers and it was confirmed that only a Coffin Spray would feature and a minimalistic approach was requested.
So David had a conundrum regarding how to display the ‘BARRY’ and ‘Spanner’ prominently in Wantage and then finding a way to make the support structures disappear before the Walsall funeral which was only 18 hours later. One option would have been to leave the support structures at Haywards and go back for them after the funeral but this would have involved doubling back from Streetly Crematorium. So David elected to make the support structures ‘disappear’ some where between Wantage and Walsall taking a leaf out of Jasper Maskelyne’s book. Jasper Maskelyne was a magician during the 1930’s & 1940’s who was used by Winston Churchill during World War Two to use ‘magic tricks’ to make cities ‘disappear’ from the Luftwaffe Bomb Aimers.
The Marston Green Funeral involved David leaving at 0445 hours to miss the rush hour traffic in Gloucester and he took his first break at Alcester Services, allowing the Birmingham rush hour traffic to subside. David arrived early in Marston Green for the afternoon funeral and he reversed the Leyland Beaver into the ample parking facilities in front of Franklin & Hawkins Funeral Directors. David became aware that a Union Jack was to be placed on top of the coffin and Franklin & Hawkins Staff helped David to secure it. The widow was very pleased with what David had done but sadly never got the chance to shake his hand at the Crematorium. David arrived home at 2000 hours and emailed the pictures he took to Franklin & Hawkins. The following morning, at around 1000 hours the widow rang, thanked David and provided some valuable information on her husband which enabled David to create an Obituary Article. David always likes to complete all the administration on one funeral before starting on the next. With the widow’s help and immediacy in responding an article was signed off and sent to the Editor of Vintage Roadscene the same day. 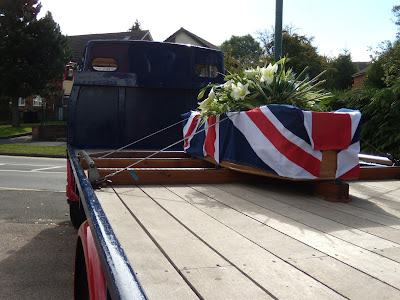 The most amazing fact about the Wantage funeral was that for the first time ever the Family changed the Funeral Director three days before the funeral! It was not for David to wonder why, he just got on with his preparation and found the new Funeral Directors, J. Godfrey & Son very accommodating. George and Faye were very helpful and expressed concern about the Leyland Beaver negotiating the sharp curve into the porte cochere without mounting the kerbs on this narrow roadway. Faye telephoned the Crematorium and arranged that David could reverse under the porte cochere. 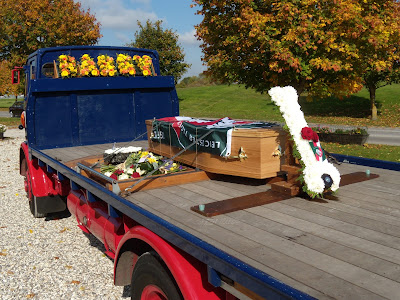 Normally when the service is taking place at the Crematorium David takes a well earned break, sipping coffee from his flask and nibbling at his toffee crisp or eating his ham/cheese/pickle sandwich. However, on this occasion relaxation wasn’t possible and with the tune of Mission Impossible ringing in his ears he set about dismantling the ‘Spanner’ & ‘BARRY’ support structures into their component parts. These were fitted, using a meticulous game plan, into a fruit-box which was then slid under the passenger seat in the cab. So when the Family emerged after the service everything had disappeared from the deck.
The Family were delighted with all the efforts that David took especially securing the Leicester Tigers Flag and how the ‘Spanner’ was displayed so that it appeared to be floating, unsupported. David was also thanked for his caring approach which had helped the Family members through a difficult time.
Leaving South Oxfordshire Crematorium at 1530 hours David headed north joining the A34 dual carriageway before taking the A4260 to Banbury and then the A423 to Coventry. David always works on the principle that most drivers stick to the motorways and main trunk roads, leaving the old A-Road Network very quiet, and the route to Coventry was no exception. Sadly the traffic became congested on the A45 between Coventry and Birmingham and the likely arrival time at Haywards was at risk. David phoned Sean Hayward who told David not to worry, as the A452 was clear and Quinn would be there whenever he arrived. It was 1930 hours and very dark when David trundled into Portland Street, however, as the Leyland Beaver approached Haywards the lights in the garage came on and the huge garage doors were being slid open. It was like a pilot looking for landing lights on an aircraft carrier and this image was enforced by Quinn gesticulating where David should park the lorry. Quinn said he would stay as long as David required for him to check over the lorry before taking him to the Premier Inn. In the morning Quinn collected David and made him a cup of tea before he was ready to depart. 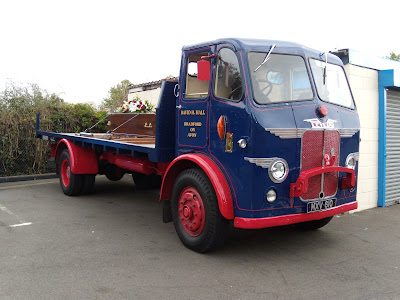 As David was sitting reading his paper at Roy Quinton Funeral Directors he reflected that in an ideal world the Walsall and Marston Green funerals would have been on the same day, as the timings would have enabled them to be done one after another. However, as we all know this ain’t an ideal world.
Posted by David Hall at 05:16 No comments: