A Traveller’s Funeral in Stretham


When David Hall was asked to quote for a funeral in Stretham, near Ely, he asked for the post codes for all the locations to be visited and he asked whether there would be a lot of flowers. David was advised that the Deceased was a Lorry Driver who had come from a Travelling background and David was keen to speak to the Florist regarding the Floral Tributes. In David’s own experience there are different types of Travellers, some live in mobile homes within Traveller sites and these often have exquisite large scale wire framed Floral Tributes. However, some Travellers reside in conventional houses and normally they have standard oasis based Floral Tributes, like anyone else, but a lot more of them!
David got some excellent help from the Family and the design for the layout for the Floral Tributes evolved gradually as more and more orders were placed. The front display was quickly agreed comprising of a 3ft x 2ft ‘Lorry’ sandwiched between a ‘DAD’ and a ‘GRANDAD’. 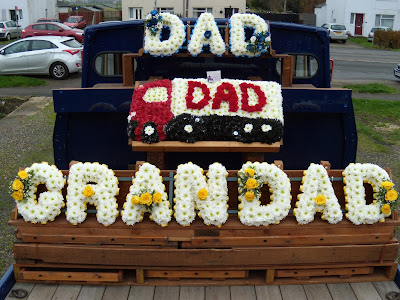 The Deceased had sadly passed away whilst taking his dog for a walk, only taking two sips from his pint in his local pub before suffering a heart attack from which he never recovered. Considering what he was doing when he passed away, his Daughter organised for a ‘Dog’ Floral Tribute to be created by a skilled Florist. David set himself the task of integrating the ‘Dog’ in the rear section of the layout, but featuring it prominently. Luckily within 3 days enough orders were placed and were of the right shapes for David to design a multi-level pyramidal structure which would develop into the best rear display he had created to date. The bottom level comprised of the ‘Dog’, a Cushion, a Pillow and a large scale 18 inch ‘Horse Shoe’. The top level had an Open Heart back to back with a 2 ft Cross. In order to personalise the display David borrowed a lead for the ‘Dog’ from Mrs Jackie Roberts, a neighbour, who is a champion breeder of Red Setters. 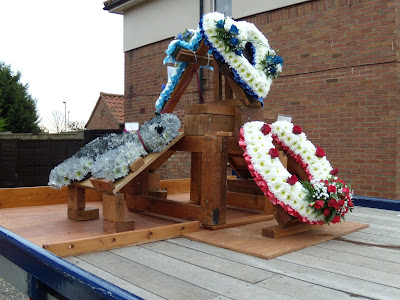 Finding a company prepared to put the vintage lorry undercover the night before the funeral proved challenging both in Ely and Cambridge. David has a network of contacts throughout Britain and he was able to park his lorry with Trevor Rowell, whose vehicles are based on a remote road in the fens near Chatteris. The Leyland Beaver rolled out of Bradford-on-Avon at 0445 hours on a cold December morning and David headed for Witney near Oxford for his first stop. Just over 2.5 hours from Bradford-on-Avon is the Co-operative Food store in Long Hanborough which has a large yard at the rear and a kind Manager who lets David use the staff toilets. David took a 45 minute rest break as usual, required by Drivers Hours Legislation before a 4.5 hour driving period should elapse, and this allows the busy commuter traffic into Oxford to subside. David arrived in Chatteris for 1430 hours, planning to use the remaining hours of daylight to wash the vintage lorry. Following Trevor Rowell’s advice David entered the yard and to phone him so that a lift could be organised to the hotel once David had washed the lorry.
David heard a guard dog bark and assumed that it would stay in its kennel. When David climbed out of the Leyland Beaver he quickly found out that his assumption was badly wrong. A huge guard dog came bounding in David’s direction. David tried to quickly assess the length of the chain but he turned to run when he knew he was within the dog’s reach. David slipped on the loose gravel, fell to the ground and the guard dog was on top of him. David was in a hopeless situation but he had the presence of mind to shout firmly ‘John sit.’ Miraculously the dog backed away and sat. What you are probably thinking is how did David know the dog’s name was John? Well most people in East Anglia are called John, aren’t they? The actor David Jason was taking his family on holiday to Bury St Edmunds in 1948. It wasn’t easy to find your way just after WW11 because most of the road signs had been removed in 1940, when Britain feared a German invasion. David Jason was lost and pulled up next to an elderly gentleman cutting a hedge. David Jason wound down the car window and asked, ‘Can you tell me the way to Bury St Edmunds?’ but the old man ignored him and kept on cutting the hedge. David Jason then shouted, ‘Hey John.’ and the old man stopped cutting, turned and approached the car. The old man, in a Norfolk, accent said, ‘How do you know my name is John?’ David Jason said, ‘I’m a good guesser’ and the old man replied ‘well guess your way to Bury St. Edmunds!’
The wife of the haulier arrived and expressed her sympathy for David who had badly bruised his elbow in his confrontation with the guard dog. Apparently the only person the dog had bitten was a Policeman, however, this was of little comfort to David as he limped into the hotel in the centre of Chatteris. David couldn’t understand why the restaurant was very busy but very few people were staying at the hotel that night. As David was watching TV before he went to bed he noticed that the church bells were chiming every 15 minutes. David assumed that the bells would stop at 2200 hours but sadly he was wrong. The chiming continued every 15 minutes right through the night, not the best preparation for a Travellers funeral.
David had envisaged that the traffic would be light between Chatteris and Stretham but he was wrong, there were 50 cars behind the Leyland Beaver on their way to Cambridge. David stopped at the Post Office in Wilburton, just before the traffic lights at the junction of the A1123 and the B1049, a back road into Cambridge. The Postmaster had put a paper under the counter for David who handed over his voucher and then climbed back into the Leyland Beaver. In the meantime all the 50 cars were trapped behind the vintage lorry on this narrow road as they were all turning right at the lights. As David went straight over the lights, on his own, he wound down his window and waved good bye to the stream of commuters. The road ahead was quiet until David reached the roundabout on the A10 and he brought the traffic to a standstill as he reversed into the driveway of the Traveller’s house. The Travellers were brilliant with David, an older lady made him a cup of tea and an older man handed the Floral Tributes up to David who concentrated on fixing the Floral Tributes in place. The older lady offered David a second cup of tea, for ‘the driver’. David said, ‘Currently I’m not the driver I’m the load assembler!’ The etiquette in dealing with Travellers is that you can speak only to the men and you should never attempt to even look at, never mind speak to a young Traveller girl. However, the Daughter of the Deceased was so grateful for the magnificent display David had created, in which Floral Tributes appeared to float, that she ran towards David and gave him a huge embrace in front of everyone. The old Traveller men each held up a hand to signify that they weren’t concerned and no damage had been done.
The Funeral Director arrived with 6 Bearers as the Deceased wasn’t a small man and his solid oak coffin was over 13 stone on its own. Excellent rapport was established with the Funeral Director and his team and David said that he was always interested in the backgrounds of Bearers. In David’s experience, there is always a mix of full time and temporary staff, which can be made up from backgrounds as diverse as Fireman and former Policeman. The Funeral Director said that there were 2 full time and 4 temporary staff and invited David to guess which the full time employees were. David concentrated on the younger men and guessed correctly. The Funeral Director then asked David to identify the former Policeman and the Fireman. Looking at the stature of each man, David chose the former Policeman and the Fireman was selected correctly looking at his age, assuming that he would still be employed as a fire-fighter but working for a Funeral Director on his rest days. So David got the three questions correct. 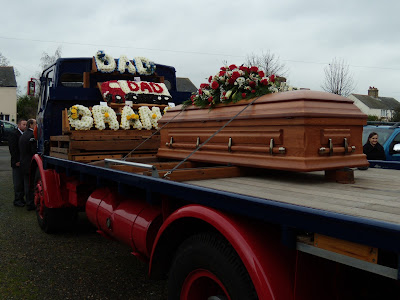 On the return journey from long distance funerals David often tries new routes to expand his knowledge of A-Roads and Service Facilities around Britain. So for the return leg from Ely David opted to use the A43 which runs from Northampton to Oxford and is mainly dual carriageway, providing ideal conditions for vehicles to get past the 1950 Leyland Beaver. Coming through Northampton David noticed that the A43 signs changed to ‘A43 follow M1 North’ and David thought that the A43 would start at the roundabout which also has the exits to the M1. However, David was wrong as traffic for Oxford was forced to travel north on the M1 for one junction and he was very worried about the consequences from his lorry only doing 30 m.p.h. and other vehicles going much faster. As David was trundling down the slip road, a heavily loaded Eddie Stobard Tractor and Trailer, not travelling much faster than the vintage lorry, was in the first lane and the Driver shook his head, signally to David that he was entering a risky venture. David shrugged his shoulders to signal that he could do nothing about his predicament and gestured that he was only going up one junction. The Eddie Stobard Driver gave David a thumbs up signal and got onto his CB Radio. The Eddie Stobard Driver got out into Lane 2 to let the Leyland Beaver onto the motorway and when the Eddie Stobard vehicle was clear of the vintage lorry David put on his head lights to inform the Eddie Stobard Driver that it was safe for him to pull back into Lane 1. The Eddie Stobard Driver then thanked David not by using left, right, left indicators, the current way of thanking Lorry Drivers, he put his side lights on and off twice, which was the way a Lorry Driver thanked someone in the 1950’s. From junction 15 to junction 15A Lorry Drivers shielded the vintage vehicle from cars travelling at 70 m.p.h. and beyond. Each Lorry Driver who passed David acknowledged his Head Lights, ‘you are clear to come in’, flash with a 1950s side lights on and off twice thank you.
David was amazed at the help the Eddie Stobard Driver was able to muster and David reflected that he had got by with a little help from his friends, remembering the Joe Cocker hit record.
Posted by David Hall at 07:20