Early Start for a Horfield Funeral


Most people may find it hard to believe that David Hall of Vintage Lorry Funerals leaves home for a Bristol funeral, only 25 miles away, at the same time he leaves for funerals further afield in Gloucester or Basingstoke. David has found that traffic in the Bristol is gridlocked in key areas at 0715 hours and this necessitates leaving Bradford-on-Avon at 0500 hours, taking the A46 north from Bath and then the A420 westwards into Bristol.
The funeral was for R. Davies & Son and the Deceased was a former Haulage Contractor who had used tipper lorries in the Avon area. It was David’s third funeral for R. Davies & Son whose main office is on the Gloucester Road, Horfield, on the old A38. The company in David’s opinion has a unique approach to customer service in having the same person who has handled all the meetings with the Family also conducting the funeral, which has not featured anywhere else in David’s experiences with large companies. Normally a Funeral Arranger meets the Family and arranges the funeral, however, a Funeral Director, who may never have met the Family, conducts the funeral. On some occasions the person conducting the funeral has less idea where the family home is than David, who always plans for this situation learning form his Father’s mantra ‘trust no one son!’
David enjoys working for Catherine Benefield as she has a detailed understanding of what David needs to know. The only problem David has dealing with Catherine is that she is often in meetings or out of the office, however, she is always contactable by email.
Catherine told David that this would be a big funeral with 3 limousines for a very popular Irishman and a large contingent from the Emerald Isle was expected at St. Patrick’s Church in Redfield and then the interment at Mangotsfield Cemetery. The Red Flower Barrow told David that the Floral Tributes would include 3 ‘Names’, ‘DAD’, ‘GUS’ & ‘MAYO’, a 6 foot Coffin Spray of Red Roses and a ‘Scania 8 wheeled Tipper’ which was advised to be created from a 36 inch x 24 inch sheet of oasis. David created a design in which the lorry would appear to be floating, apparently unsupported, and as ‘MAYO’ depicted the Irish county of the Deceased’s birth, two Shamrocks were laminated and fixed either side of the four lettered word. 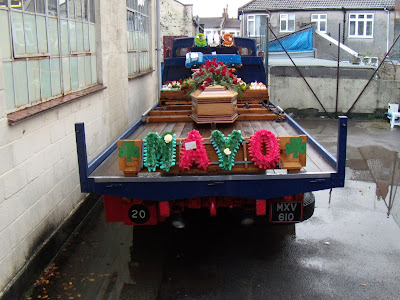 David has a good working knowledge of the roads around Bristol and he discussed with Catherine her proposed route. Likely problems were anticipated with the limited parking at St. Patrick’s Church, however, Catherine knew the Deacon and arranged for the school next door to open its gates to enable the funeral cortege to turn whilst the service was underway.
The night before the funeral David rang Dave at The Red Flower Barrow to check if any last minute orders had arrived from Ireland and, adopting a trust no one stance, David asked that the ‘Scania 8 wheeled Tipper’ be measured. From previous discussions David provided a board which was 36 inches x 20 inches, however, alarm bells rang when Dave said the Floral Tribute was 44 inches x 22 inches. Although David always seeks to have Floral Tributes floating apparently unsupported, unless he made changes to the Support Structure, the ‘Scania’ would be literally unsupported. 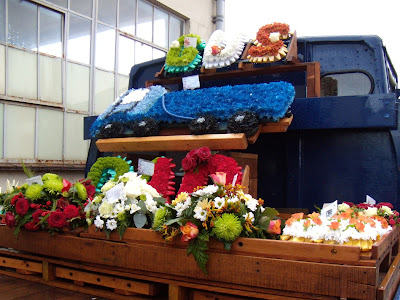 When you are intending to be in bed by 2130 hours the last thing you want to do is to be looking for lengths of wood to sort out a problem when you should be relaxing, unwinding, preparing mentally for the next day. David knew where a 48 inch length of 4 inch x 2 inch timber would be located in his storage system and he put a support bar behind the 36 inch wide board, right at the top, anticipating a tablet 44 inches x 22 inches.
A winter storm called Kate was expected to arrive in Bristol at 0700 hours, so David’s strategy of getting to R. Davies & Son’s Ashley Down support location by 0615 hours meant that he would park up before the rain would start.
David went to buy a newspaper in the Shell Garage on Gloucester Road and on his way back he passed R. Davies & Son’s main office with its large windows in it entrance. Thinking of the Hollies hit ‘Look through any window’ David took a peek and he didn’t see ‘smiling faces all around’ as the song suggests but the Floral Tributes that he would be loading in 3 hours time, neatly arranged on the carpet. To David’s horror he noticed that the ‘Scania 8 Wheeler’ Floral Tribute was not a tablet but the oasis sheet was cut out in the shape of the lorry which meant that the 48 inch support bar would have to be repositioned lower down the board before the rain arrived.
At 0715 hours David noticed that the traffic in Ashley Road had come to a stop, Gloucester Road and other streets in the Horfield area were now gridlocked and David, sipping his coffee sitting in his cab, knew that the early start had been warranted.
As Catherine had warned it was a big funeral with an estimated 1000 people at St. Patrick’s church. There were a lot of large thickset Irish men, the sort of men you wouldn’t have picked an argument with. During the service Jane Crouch the female Boxing Champion turned up at the church. Due to cars being parked in the school yard, David had to spin the Leyland Beaver around in the limited space in front of the church. After the service whilst David was securing the coffin an Irish man, with a grin on his face asked, ‘What sort of heater have you got in yer motor?’ David replied, ‘A 9.8 litre heater’, meaning no heater just the heat from the engine.
There was a huge crowd gathered around the grave and one person started to sing whilst strumming a guitar. One of the Funeral Bearers quipped, ‘Jane Crouch the Boxer turns up at the church and now Van Morrison turns up at the cemetery!’ 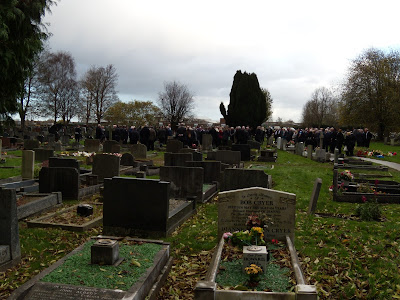 Other key events which happened during November 2015 was a funeral in the Isle of Wight for a former Prison Officer at Parkhurst on the same day that Vintage Lorry Funerals was featured in the BBC 1 Wales TV Programme, ‘A Very Welsh Undertaking’ which concerned the 1950 Leyland Beaver being filmed during a funeral in Newcastle Emlyn.
Posted by David Hall at 03:10