That was the week that was!


In April each year David Hall attends the Classic Commercials Show in Malvern at which he meets members of the public interested in his vehicle. In addition families who have previously used the 1950 Leyland Beaver, visit the show each year to see a picture for their Loved One’s funerals within the 24 that David features within the display. David also uses Malvern as an opportunity to build a ‘Theme’ which could be displayed in a funeral to provide an example of what can be created to stimulate the thought processes of people visiting the show. 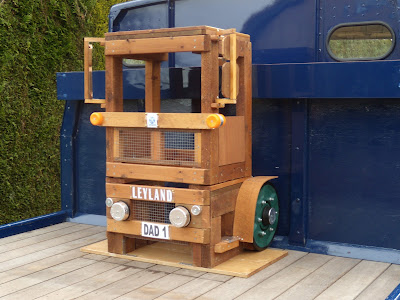 In 2016 the ‘Theme’ created was a 1960’s Leyland Ergo Cab the first example of a tilting cab in Britain which fundamentally changed how lorries could be serviced, as previously Mechanics had to work on the engine from within the cab. David created the model with a realistic tilting mechanism that could be used in a crematorium just before the coffin was off-loaded as a mark of respect, just like someone removing their hat and bowing their head. 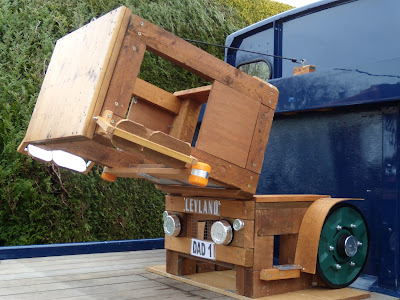 During the February David attended the Commercial Transport in Preservation AGM and he became aware of a Spring Road Run which would take a new route encompassing three White Horses in Wiltshire. As this was scheduled for the Sunday before the Classic Commercials Show in Malvern, David thought that the Leyland Ergo Cab could get two ride outs in 6 days. He had previously written an article about a funeral in Calne and the Family of the Deceased had kept in touch with David providing old photographs for the article. Consequently David contacted Stuart Smith and his daughter Sara Jane about travelling with Leyland Beaver on the Spring Road Run, Stuart in the cab and Sara Jane as the roving photographer. David felt that the Road Run would provide a good marketing opportunity near his home and also the opportunity to appear in the Wiltshire Times, a weekly paper that services north Wiltshire.
David has found that in the funeral business there can be no future plans made because one phone can change everything. David sometimes thinks that funerals are like Policemen, whenever you want one they are thin on the ground and whenever you don’t want one, one pops around the corner.
A phone call from a Portsmouth Funeral Director provided a funeral for Thursday April 7th for a former Drayman with Brickwoods Brewery. A job on the second day of a new Financial Year is the best present a Self Employed man can have, however, the Thursday was between the Sunday  CTP Road Run and the Saturday Malvern show. David could have cancelled either of the Sunday or Saturday events, however, this would have involved disappointing the Smith family and countless people on the Saturday who would have needlessly driven hundreds of miles to see the picture of their Loved Ones funeral on the vintage lorry, only to find that the 1950 Leyland Beaver was nowhere to be found.
The solution was to undertake all the jobs and devise a way to transfer the Leyland Ergo Cab off the deck onto a table close-by within David’s garage on the Sunday night and undertake the reverse procedure on the Friday morning. What is more, the plan required that only David and his wife could be involved in the transfer given the likely time of day that the activity would take place.
At this stage there was no knowledge about the Floral Tributes for Portsmouth, however, the Funeral Arranger was most helpful and provided a ‘heads up’ of the likely flowers from the Family. The list included, a ‘Heart’, a ‘Pint of Guinness’, Daffodils in a box and three ‘Name’ Floral Tributes, ‘DAD’, ‘GRANDAD’ and ‘BRICKWOODS’. David immediately recognised that ‘BRICKWOODS’ being a ten lettered word would be too long to fit across the deck and as the coffin is rotated on the deck prior to off-loading it is not feasible to place ‘Name’ Floral Tributes alongside the coffin like Funeral Directors do in their hearse. 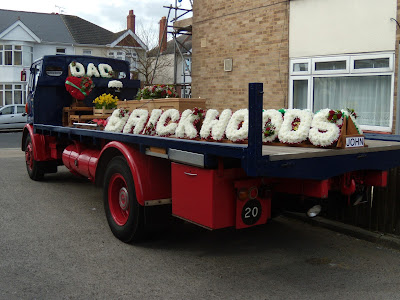 The only solution was to position ‘BRICKWOODS’ diagonally across the deck and to create an ‘arrow head’ with the ‘GRANDAD’ Floral Tribute then positioned to form the opposite face. Around this time David took a call from a lady called Pia, a friend of the Family who would be creating the Floral Tributes. Her first question was, ‘How long is your vehicle?’ David sensed that she had also spotted the potential difficulties of the ten lettered word, however, he stressed that she should not tailor her ideas to fit the vehicle as David would make wooden supports to fit her flowers. English wasn’t Pia’s mother tongue and some people might say the same for David, coming from the North East of England, with his distinctive accent. However, they managed to communicate and Pia was unlike other young ladies as she said that David could ring her mobile at any time. Often in David’s experience, young ladies don’t primarily use their phones for phoning, their main use is texting, internet research and taking pictures. The etiquette in contacting a young lady is normally to send her a text asking when would be a good time to call. Pia emailed David at 21.40 hours giving the measurements he required, however, there was no mention of the Daffodils in a box, so David took Pia at her word and rang her mobile at 21.50 hours. Pia was happy to take the call, but she said that she knew nothing of the Daffodils in a box.
The following day David receive a call from Matt, son of the Deceased, and he said that his Dad had always joked that when he died all he wanted his son to do was to throw some Daffodils in an old orange-box. The Family were struggling to find an orange-box but David said that he could supply one, using his relationship with S.K. Fruits in Trowbridge. 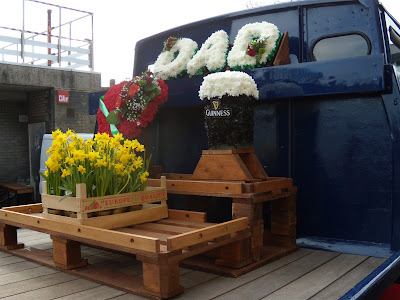 When the Funeral Arranger emailed details of the funeral it was evident that the Deceased was a Jehovah’s Witness as the Kingdom Hall was the location of the service prior to burial in Milton Cemetery. As David was building the Support Structures for the flowers, the tune he had in his head was Sir Van Morrison’s ‘Kingdom Hall’ an upbeat number on his Wavelength album. Van’s mother had taken him in his younger days to both the Kingdom Hall and the Pentecostal Church in North Belfast. Whilst David does not want to contradict a Knight of the Realm, in David’s opinion Van linked the title with the Jehovah’s Witnesses but the essence of the song is about the scenes he must have witnessed in the Pentecostal Church ‘….oh they were swingin’ down at the Kingdom Hall, oh bells were ringin’ down at the Kingdom Hall.’
On the day of the funeral David left Bradford-on-Avon at 0430 hours in the pitch dark and as he went on the Melksham bypass he could see many blue lights flashing in the distance. Between Devizes and Melksham a car had failed to take a sharp bend and with the incumbents still inside, the car was embedded into a hedge when David arrived at the scene. Unfortunately two Transit Vans were blocking the Leyland Beaver’s route around the accident so David broke the law, he used he used his horn when the lorry was stationary and it was before 0700 hours. The Transit Van Drivers became aware of the Leyland Beaver and pulled out of the way to let the lorry through. As David could offer no help to the Firemen he carefully steered around the damaged car and was on his way. After collecting his paper at Sutton Scotney Services at 0615 hours he reached the M3 Motorway by 0700 hours. David travelled parallel to the M3, under the Spitfire Bridge, before taking an unclassified old Roman Road over the hill to Morestead and he got to Corhampton on the A32 by 0720 hours. David went south on the A32 for a short distance before turning left onto the B2150 and was on the A3 in Waterlooville by 0745 hours. He turned left onto the Havant Road before taking the A2030 Eastern Road dual carriageway which runs down the east side of Portsea Island. David passed Fratton Park, home of Portsmouth F.C., and was outside the Funeral Directors at 0815 hours.
Pia and her Partner delivered the flowers and helped David put them into their positions on the deck. Pia’s precise measurements meant that no rearrangements were needed and the display was perhaps one of the best David has created to date. A clean symmetrical display with the ‘Heart’ and the ‘Pint of Guinness’ being arranged to be at the same height and an arrow-head rear display, formed by the ten and seven lettered ‘Name’ Floral Tributes, which also created a facility to accommodate flowers from friends so that they didn’t detract from the family’s Floral tributes. David sent pictures to Val Spicer, whose bases were used by Pia and the company complimented the Florist on her work. 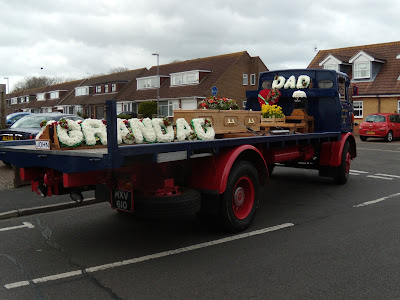 Friday was spent dismantling the Support Structure and then transferring the Leyland Ergo Cab model back onto the deck before erecting the Vintage Lorry Funerals sign. David then placed the 24 pictures of previous funerals on the two boards, and positioned them either side of the sign. Saturday involved another early start with the 66 year old lorry trundling out of Bradford-on-Avon at 0415 hours, arriving at the Three Counties Showground in Malvern at 0645 hours.  Claire Lunn gave David his entry documents and inviting him to park the vintage lorry near the entrance gate so it was the first vehicle people would see on entering the show. Stuart Smith and Sara Jane visited David and were impressed with the quality of the pictures and were amazed to see the Leyland Ergo Cab performing the tilting manoeuvre. Later in the day, David arranged for Stuart and Sara Jane to meet Mike Forbes, Editor of Vintage Roadscene, who had featured Stuart’s Dad’s Obituary so prominently in the previous month’s magazine.
When David was coming home from Malvern he recalled the events which had taken place in the past 6 days and remarked that ‘that was the week that was’ , remembering the BBC TV Programme which ran from 1962 to 1965 and was the launch pad for David Frost, Roy Kinnear, Lance Percival, Willie Rushton, Bill Oddie, Johnny Speight and many more.
Posted by David Hall at 06:18