On the morning of Friday May 27th 2016 David got up at 0400 hours ready for an early start at 0445 hours for a funeral in Sutton Coldfield. The route is well tried and David often uses the A46 around Bath, up into Stroud, the A38 around Gloucester to Tewkesbury and rejoining the A46 to Oversley Mill Service at Alcester, normally David’s first stop.
David put on the computer for his wife to check the roads whilst he took a shower. Whilst David was having his breakfast his wife shouted, ‘The A46 around Bath is closed for Night Tarmac Laying and won’t reopen until 0700 hours.’ This caused David to have a quick change of strategy. In recent years David has always used the ‘Gloucester route’, which he has christened The West Side Story, because it is easier to get vehicles around the Leyland Beaver due to the high incidence of dual carriageways and three lane roads, wide enough to get vehicles three abreast. In addition, Oversley Mill Services on the A46 near Alcester have excellent toilet facilities. David is well known to the members of staff who allow him to park the Leyland Beaver whilst he takes a 45 minute rest break. A well stocked shop, with a good supply of newspapers and magazines is also next door to a recently built McDonald’s restaurant.
David set out from Bradford-on-Avon on the back road to Corsham, evaluating how he could cut back and join the A46 north of the road works, however, the burning thought in David’s mind was that must arrive at Sutton Coldfield by 1000 hours. As he approached Chippenham David thought it would be beneficial to abandon the A46 strategy and go via the old Fosse Way, which David had used in the infancy of Vintage Lorry Funerals. The high incidence of double white lines, lack of any dual carriageway and limited three lane roads caused David to review this route in 2006. In addition there are no toilet facilities on the Fosse Way apart from Tesco at Stow-on-the-Wold which opens at 0600 hours. However, in this emergency situation it was a case of needs must and David crossed the M4 and headed for Cirencester.
David doesn’t use a Sat Nav, he has a list of road numbers and landmarks to watch out for, drawn with coloured pencils, on the back of an envelope attached with a bull clip to a Road Atlas which lies across the engine cover. The only problem was that the route plan in front of him was for the A46, not the Fosse Way, so David just went with road sense established over many years and followed the signs.
At 0600 hours David reached Cirencester and saw hardly anyone on the road. The first part of the road to Stow-on-the-Wold involves 3 very steep hills, including the notorious Fossebridge. The 1950 Leyland Beaver is excellent on hills and on the two lanes uphill section of Fossebridge a large modern day articulated vehicle pulled out, attempted to overtake but couldn’t catch the Leyland Beaver which was cruising up the steep slope at 25 miles per hour in top gear. At the brow of the hill David slowed down and waved the articulated vehicle past and the Driver’s Mate, sitting in the passenger seat, put up two thumbs signifying that both men in the modern lorry were in awe of the performance of the 66 year old vintage vehicle.
The steep down hill sections on the Fosse Way enabled the Leyland Beaver to achieve 42 miles per hour down the slope and this uplifted the average speed. In addition the traffic lights in Stow-on-the-Wold and Moreton-in-Marsh are set on a short timescale change so David was never stopped for long. Any cars that came up behind the Leyland Beaver were driven by experienced drivers who came past the vintage lorry as soon as David signified that the road was clear up ahead.
David was surprised at the progress he was making having reached in 2.5 hours, Halford, where the road splits and the original Fosse Way becomes the B4455 and goes through to Leicester or Ratae Corieltauvorum as it was in Roman times. In 3 hours he had just left the A46 just south of Warwick, which was becoming crowded with rush hours traffic, joined the A4177 and reached Balsall Common. David looked at the Smiths Speedometer and realised that he had travelled 90 miles, averaging 30 miles per hour, which was excellent for a lorry with a top speed of 32 miles per hour on level roads. If David had gone via his preferred A46 route in 3 hours he would have only got to Oversley Mill Services and travelled 80 miles.
The A4177 leads onto the A452, which is mainly dual carriageway and follows the M6 closely before cutting north towards Brownhills. The traffic was busy on the M6 but light on the A452. David took the A5127 to Sutton Coldfield and landed at the Funeral Directors at 0900 hours, 4 hours door to door, no stops, saving an hour on the A46 route.
As David waited for the Funeral Director to open, he bought a paper, sipped his coffee and ate his Toffee Crisp. He thought that despite the shock that he had at 0400 hours things hadn’t worked out so bad. A location that had been felt to have been at the extreme of David’s 5 hour driving time to go there and back in a day, was reached with one hour spare! Thus if the Fosse way could be used for east Birmingham and beyond then it may be possible to undertake Lichfield or Leicester on a there and back basis if the funeral was booked for the afternoon.
This was an example of how sometimes events don’t turn out as bad as people dread or that every cloud has silver lining. 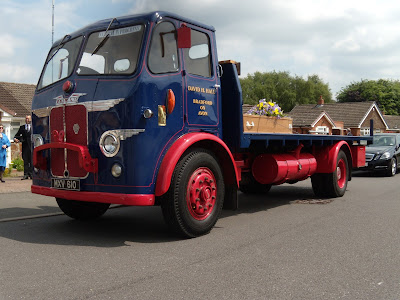 The funeral was conducted by a young Funeral Director called Leon and David wasn’t sure how to spell his name so he asked if it was spelt the same way as Leon Russell, who wrote Delta Lady for Joe Cocker. Well young Leon hadn’t heard of either gentleman! When Leon was paging the cortege at Streetly Crematorium, it became evident to David that Leon was going the wrong way around the system but there was no discreet way to warn him. Sounding the horn would have been inappropriate and David didn’t want to ruin Leon’s confidence so the lorry and the following limousine ended up the wrong way in the porte cochere. Being 30 minutes early and the wrong way round, nothing could get much worse for Leon, who was crestfallen. Leon explained to David that this was the first time he had been to Streetly Crematorium and David told him that Leon Russell’s most famous song was Stranger in a Strange Land. Leon said that the song described perfectly how he felt. 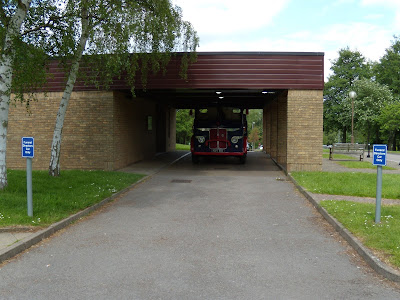 Whilst the service was taking place David drove the wrong way into the car park, turned the vintage lorry and parked in the corner. Whilst he was having his sandwich some mourner for the next funeral parked his 4 x4 in front of the Leyland Beaver blocking it from leaving the car park. David got out of the cab and asked the person not to leave his vehicle in that position, using a gentle, polite and persuasive tone. In David’s experience people in grief, late for a funeral can do silly things, abandoning their cars with no thoughts of anyone else’s need but their own.
Coming home David thought he would use the Fosse Way again but this turned out to be a bad decision. This was the Friday before a Bank Holiday Monday and a lot of people were travelling to the West Country and using the Fosse Way. The quick-fire traffic lights in Moreton-in-Marsh and Stow-on-the-Wold, which were ideal at 0630 hours not holding up minimal traffic, were a nightmare at 1630 hours with only small batches of a large volume of traffic being let through and the remainder being held back. This created an ever increasing length of stationary traffic approximately a mile outside of each town. The biggest problem was caused by the Tesco traffic lights with local people having completed their weekly shopping forcing their way into the queuing traffic.
It also wasn’t easy to get cars past the vintage lorry has a high preponderance of cars with caravans could not overtake quick enough before the next oncoming vehicle arrived. Coming towards Bourton-on-the-Water David spotted Bernard Saunders and his Daughter working on cars outside their workshop. David piped his horn and they waved back. David has known the Saunders family for over 15 years and he always rings them if he needs any advice on road conditions in their area.
The journey home took 6 hours, so David noted in his Lessons Learnt List that the Fosse Way is not always the answer and selected use in the future should be part of the Vintage Lorry Funerals operating plan. Also a road check should be made the day before the funeral not on the morning of the funeral.
Posted by David Hall at 05:45