A Heavy Weight Funeral in Bloxwich


Whilst David Hall was taking a break on his way to a funeral in Reading he received a call on his mobile from a lady in Bloxwich. She said that she had found David’s number from the Vintage Lorry Funerals website and wanted to know the cost of a funeral in Bloxwich. David asked if the Deceased was her Dad, however, the lady replied that the lorry was for her Husband who was only 53. Having recently been to Walsall, which is the next town to Bloxwich, David could provide an instant answer on the price. The Deceased’s only wish was that he should be taken to Streetly Crematorium on a lorry. The lady had enquired if her Husband’s former employer could have provided a lorry, however, the company pointed her towards ‘a bloke in Bradford-on-Avon who has a Beaver.’
Whilst David was on his mobile, he noticed that a young man in a Grundon uniform was waiting to speak with him. David had previously undertaken his Dad’s funeral in Newbury on February 2nd. He shook David’s hand and said, ‘We will never forget the brilliant job you did for our Dad and the excellent Obituary article you wrote for Vintage Roadscene.’
David then phoned Sean Hayward who runs Haywards of Walsall a transport firm with over 80 vehicles, with whom David parks the 1950 Leyland Beaver the night before a Midland’s funeral. Sean said it was no problem and he would get Quinn Holmes, his Fleet Engineer, to make space available in the garage and Quinn would take David to the Premier Inn and collect him in the morning.
David’s next phone call was to the Bloxwich Funeral Director and Marie who answered the phone asked if David was a friend of the Family. David was disappointed that despite his marketing efforts, not for the first time, someone in the funeral industry had never heard of Vintage Lorry Funerals. Marie asked the height of the side roller and then expressed her concerns as all her employees were female and the Deceased in his casket was thought to be 36 stones. David responded, ‘You’ll need to find some blokes to lift the coffin onto my lorry.’ 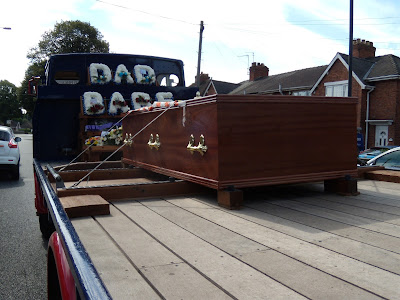 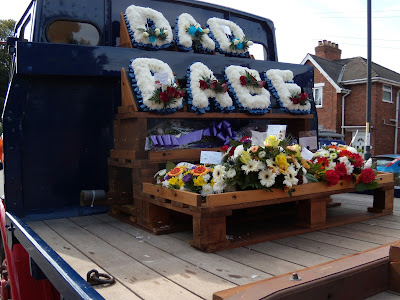 David came back using the A452 which is a fast dual carriage way in parts that goes around the east side of Birmingham in which the traffic flows and his first stop was at Tewkesbury where David normally refuels with competitively price diesel.
For once David got home in time for his tea, however, whilst his wife was making the meal David sent pictures to the Widow.
Posted by David Hall at 09:30