On April 20th 2011 Vintage Lorry Funerals took Roger Hurd, a Builder from Bath, on his final journey to Haycombe Crematorium. 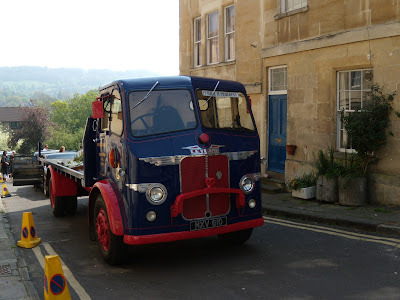 Roger, whilst on a journey to visit his Daughter Jade in Cornwall, had picked up a Vintage Lorry Funerals card in Woody’s Transport Café at Sourton on the A30 near to Okehampton. He thought that the picture on the front was interesting and he noted that the STD code of the phone number was the same as his home town of Bath.
Sadly within a short period of time Roger had collapsed and passed away in his Brother’s arms. Roger’s Mum found the Vintage Lorry Funerals card in his jacket pocket and decided that if Roger had wanted the Leyland Beaver for his funeral then she would have no objections provided the flowers were arranged around his coffin in the same manner as in a hearse. 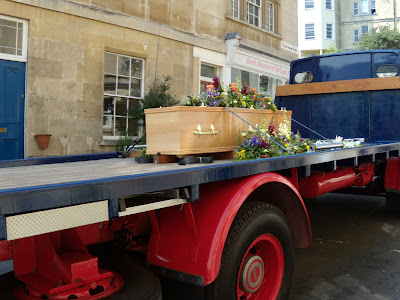 In the centre of Bath is a traffic system, just down the road from where Roger had lived, which prevents cars going through the centre, however, buses can travel through a set of two traffic lights. The facility is called the ‘Bus Gate’, however, it would be more appropriately called the ‘Money Gate’ because motorists, unaccustomed to the area, get confused with the sign, go through the traffic lights and end up being fined £60.
Roger was often walking through the ‘Bus Gate’ area on his way to the shops and he used to step in front of cars preventing them going through the ‘Bus Gate’ and saving them the fine. Roger was such a strong campaigner against the ‘Bus Gate’ that when he passed away his family sought Bath & North East Somerset Council’s authority for David Hall to drive the Leyland Beaver through the ‘Bus Gate’ enabling the vintage lorry to take the most direct route to Haycombe Crematorium.
With over 200 mourners expected it was decided to hold the service within the larger Chapel just inside the gates. Rog, as he was known to his friends, was then re-loaded onto the 1950 Leyland Beaver, amid rapturous applause, and all the mourners walked behind the lorry for approximately one mile down a steep incline to the Crematorium. David always waits to meet the Family after the service in case anyone would like to see inside the cab, however, on this occasion it wasn’t the cab that mourners were interested in but the deck of the lorry.
All the mourners had left their cars at the Chapel near the entrance and two ladies approached David and enquired if they could ride on the deck of the Leyland Beaver, saving them a long walk up a steep incline. David was happy to help but insisted that everyone had to follow his instructions. Using the ladder, which is slid out from a shelf under the deck, David helped the mourners onto the deck as some had inappropriate footwear. David then told the men to stand at the front of the deck and hold the headboard firmly. Ladies whose skirts may have become difficult to control in the breeze were invited to sit on the deck with their legs dangling over the sides. David admonished two young ladies who were sitting over the drive axle of the lorry telling them to move away from any moving part, ‘we don’t want to create next week’s business this week,’ David quipped.
David set off very slowly with over 30 people on board and as the Leyland Beaver climbed the hill he noticed the graves of German Luftwaffe staff who had lost their lives attacking Bath. As this was April 20th, Adolf Hitler’s birthday, David suddenly likened his rescue mission to that he had seen in a three part BBC documentary drama three months earlier about the events that took place after a U-boat sunk a Trooper Carrying Liner in WWII.
S.S.Laconia was a Liner that had been converted into a Troop-ship with guns mounted front and aft on its way from Egypt to England taking the long way around Africa to avoid German shipping in the Mediterranean. There were 2732 people on board including 80 civilians, 268 British Soldiers, 1800 Italian Prisoners of War, and 160 Polish Soldiers to guard the Italians.
On September 14th 1942 at around 2000 hours Korvetten Kapitan Werner Hartenstein in U-Boat 156 spotted the lone liner, spewing out smoke from it funnels and fired two torpedoes at a range of 2 miles, both of which hit the ship. The Laconia started to list and passengers were instructed to abandon the stricken ship, however, the Italians were locked in cages beneath the decks. Some Italians managed to break out and some sadly were bayoneted to death by the Polish Guards as they rushed towards life boats.
Hartenstein surfaced and made his way towards the Laconia in a bid to capture Military Officers. In the fading sunlight the U-Boat crew spotted floating corpses, over-crowded lifeboats and frantic swimmers crying for help. The U-Boat crew were astonished to hear ‘Aiuto, Aiuto’ the cries of help, help from Italians in the water, who at that stage in WWII were fighting on the same side as the Nazis. Hartenstein thought that he had attacked a Troop-ship but he now realised that Laconia was carrying many passengers. 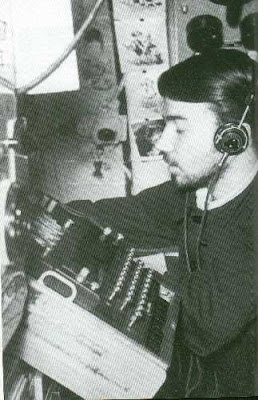 Realising his mistake, Hartenstein immediately launched a rescue operation. Women and children were crammed inside the U-Boat, with the German Officers giving up their bunks to survivors, many people stood on the upper deck of the submarine and 200 survivors were in 4 lifeboats that were tied to the U-Boat with rope. Hartenstein used his Enigma machine to contact Admiral Donitz who immediately dispatched 7 U-Boats to support the rescue mission. Adolf Hitler found out about the rescue and forbade U-Boats being taken off their fighting roles. Admiral Donitz then took a very brave step and countermanded Hitler’s order sending U-506 and U-508, captained by Erich Wurdeman and Harrd Schach, which arrived around noon on September 15th. Donitz took the decision mainly to bolster the morale of the U-156 crew. 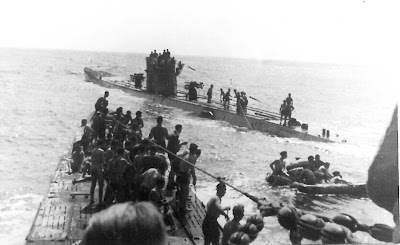 Sadly a Nurse, Doris Hawkins, was travelling with a 14 month girl called Sally and the young girl was lost as she was being transferred from the lifeboat to the U-156. Doris was distraught and the crews of the three U-Boats used search lights and spent considerable time looking for the little girl but Sally was never found. U-507 loaded 491 people, including 15 women & 16 children and U-506 loaded 151 people, including 9 women and followed Hartenstein, who was towing 4 lifeboats.
Hartenstein flew a Red Cross Flag and broadcast in English on an open channel, ‘If any ship will assist the ship wrecked Laconia crew I will not attack, provided I am not attacked by ship or airforce.’
The three submarines had remained on the surface for about 2.5 days but for safety reasons the three U-Boats split up and provided a separation between the vessels. On September 16th at 1125 hours an American B-24 Liberator Bomber from Ascension Island circled around U-156 and Hartenstein’s first thoughts were that it was going to drop supplies. However, despite the Red Cross Flag, people on the deck and four lifeboats in tow, the Liberator attacked and dropped depth charges which landed between two of the four lifeboats immediately wiping out half of the boats and their survivors. Hartenstein submerged U-156 very slowly to allow the people on the deck to swim free and the two remaining lifeboats headed for Africa. One with 68 people on board, lifeboat No. 9, reached the Liberian coast with 16 people alive, including Doris Hawkins and the other lifeboat was rescued by a British trawler after 40 days at sea but only 4 of the 52 occupants were alive.
U-506 & U-507 escaped the bombing run by the USAAF Liberator and continued to pick up survivors who had swam off the deck of U-156 before it submerged and all the survivors on the U-Boats were transferred to Free French vessels and landed in Dakar on 24th September.
The Laconia incident had far reaching consequences:-
The American Bombing of U-156 caused Donitz to issue an instruction that in future all rescue operations were forbidden.
Lieutenant James D. Harden, who flew the Liberator that attacked U-156, and his crew were awarded medals for the alleged submarine sinking whereas in truth they had only hit two lifeboats killing a number of survivors.
During the Nuremberg War Crimes Trials, Admiral Donitz’s legal team used the rescue of the Laconia survivors to help the judgement of the Death Penalty to be commuted to 11.5 years in prison. Donitz survived World War II and lived to an old age, passing away on Christmas Eve 1980.
Werner Hartenstein, holder of the Knight’s Cross, Germany’s highest military honour, and his crew were not as lucky because 6 months after the Laconia rescue, the U-Boat was depth charged by a Liberator off the coast of Barbados and U-156 was sunk with all hands lost in March 1943.
Of the 2732 people who left Egypt on the SS Laconia only 1500 survived.
There was, however, a better outcome regarding the motorists fined for going through the Bath Bus Gate. Almost three years after Roger Hurd passed away Bath & North East Somerset admitted that the signs were confusing and refunded £250,000 of the fines already paid. You could sense that Roger Hurd would be looking down and smiling.
Posted by David Hall at 02:21 No comments: