A Funeral in Sidcup


In October 2016 a family from Sidcup left a message on the Vintage Lorry Funerals website about a funeral on November 7th. David exchanged emails with the Daughter of the Deceased and one of his standard questions is ‘Who will be the Funeral Director?’ David told the Daughter that he would have to check that there would be no problem in the Family paying him direct, as not all Funeral Directors are happy with this type of arrangement in which they loose any mark up they would seek to invoke.
David phoned F. A. Albin & Sons Sidcup Manager, Mickey Thorpe, to introduce himself and initially the conversation didn’t go well when Mickey asked, ‘Are you the Piper?’ David explained that he was the man with the lorry and he needed to know if F. A. Albin & Sons would be happy with the Family paying David directly. Mickey explained the company would have no problem working with Vintage Lorry Funerals or with the Family paying David directly.
The main Floral Tributes were ‘POPS’ from the Deceased’s children and a ‘Pillow’ from the Deceased’s Partner. David proposed a minimalistic layout with ‘POPS’ on the headboard and the ‘Pillow’ appearing to float near the head of the coffin. In order to achieve this David asked Jane, of Sweet P Florists in Sidcup, to take a series of measurements of the ‘Pillow’ oasis base. David then found a piece of wood from his stockpile that was the same shape as the ‘Pillow’. 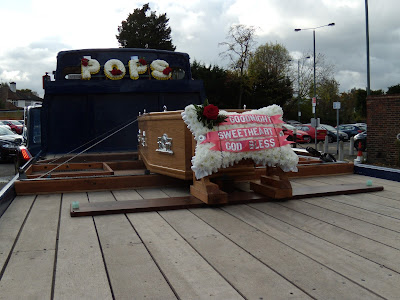 The accommodation for the lorry and David were quickly sourced as David chose to use the Kwik Fit location in St. Mary’s Cray to park his lorry in overnight, the third time he had used this facility in the past 12 months. The staff know David and welcome his vintage lorry every time it trundles into their yard. Men are always available to guide David as he reverses the Leyland Beaver into the MOT Bay and then David hands over two boxes of biscuits, one for the men and one for the Manager and his family. One hundred yards down the road is a low cost hotel which offers cost effective rooms but with no meal facilities. The Marie Rose offers a clean en suit room and evening meals are within 80 yards at Nandos and breakfast is available at Costa Coffee from 0730 hours or a local café from 0800 hours. David is happy to use St Mary’s Cray as his operating centre for South East London and Kent.
When David pulled up at F. A. Albin & Sons Mickey Thorpe came out to explain where David should park his lorry and one of their staff helped David to turn the lorry in a tight area, watching that he didn’t get too close to any cars or bollards. Mickey noticed that one of the Leyland Beaver’s rear tyres had scuffed a kerb and he made tyre dressing available as it was important that F. A. Albin & Son standards should be maintained.
David told Mickey that he had built up Vintage Lorry Funerals from scratch in 2002 and has developed an awareness campaign that normally generates four funeral enquiries per month on average, nationwide.
David is also the only Carriage Master who builds three dimensional displays from Floral Tributes. Whereas other Carriage Masters, (Horse Drawn, Land Rover, VW Caravanette) always load the coffin first and then try to fit the flowers around the coffin, David loads the flowers first, sometimes taking 90 minutes to check each Floral Tribute is correctly aligned.
When the flowers arrived at the F. A. Albin & Sons Funeral Home in Sidcup David noticed that the three ribbons on the ‘Pillow’ were loose and fluttering in the breeze. David thought to himself, ‘This may be OK in a hearse but they will fly away off my lorry.’ So working like MacGyver in the 1980’s TV Show, David took two elastic bands out of his equipment box and in no time the job was done. The result may not have looked pretty but it was very practical.
When the cortege left the Family home two F. A. Albin & Sons employees walked alongside the lorry, positioning themselves adjacent to the rear axle which provided an amazing display of respect. This was the first time that this had ever been done in over 300 funerals. It provided David with an added complication now having to focus on the extra width required between cars in the street as well as the distant between the Conductor, who was paging the cortege. 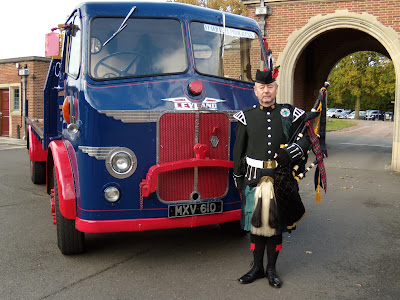 The 1950 Leyland Beaver was paged in Eltham Crematorium by Pipe Major Chic Mackie, from the Black Watch – London Pipes and Drums, and whilst the service was taking place Chic spent time admiring the vintage lorry and asked David for some of his Business Cards.
Leaving Eltham Crematorium at 1500 hours David took his normal route using the back roads around Croydon and despite catching the end of the school day and the beginning of the rush hour David was at Tolworth on the A3 by 1645 hours. The trick was the correct road selection and tactics to ensure that the 67 year old lorry kept rolling and was never stuck behind a bus. David took a statutory 45 minute break at Sutton Scotney Services on the A34 which he arrived at by 1900 hours. He then refuelled at Ludgershall just before the garage closed at 2100 hours and the Leyland Beaver pulled into Bradford-on-Avon just before 2230 hours. Unfortunately a dog was loose on the street and threatened to bite David’s wife as she was guiding the vintage lorry up the driveway. David always reckons you must be prepared for anything on the road.
At 1615 hours earlier that day David was sitting at the lights on the A232 which crosses the Tram Line in the Sandiacre region of Croydon. Two things disturbed David, one was the speed of the Trams that he saw coming towards him in his nearside mirror and the second being that a bus turned right at the lights and drove onto the Tram Tracks. David had a bad feeling about the safety as motorists unfamiliar with the crossing could have followed the bus and ended up on the Tram Line. The following morning David was horrified when he put on his TV and learned about the horrific Tram Disaster in Sandiacre.
Posted by David Hall at 05:35