Just before Christmas 2017 David received a phone call from a Family in the Tredegar region of Wales and was asked to provide a guideline price. Given that it was almost Christmas and the distractions that this period can bring, details of the flowers, church, cemetery and Funeral Director were slow to materialise. So David worked out a price based on Tredegar.
Two days later David was informed that the Funeral Director was based in Rhymney, which is 20 miles north of Tredegar and David would have been within his rights to modify his guideline price. However, David agreed to keep the price the same, telling the Son of the Deceased that the best Christmas present that a Self Employed man can have is work during the first week in January.
David established that the Floral Tributes would be a Coffin Spray and a Lorry Tablet two dimensional tribute but the lady preparing the flowers was a friend of the Family and was difficult to contact. So David made the assumption that the ‘Lorry’ would be the normal 3 ft x 2 ft Floral Tribute that he had carried many times before, and this should be the centrepiece of the display.
Around this time the Son of the Deceased emailed to say that he had just looked at the Vintage Lorry Funerals website and asked if David could create an ERF 1950 Cab and incorporate a Welsh Flag into the design. David was dismayed because both of the proposed options would be destined for the same position on the headboard at the front of the deck, so only one would have been possible. In addition the guideline price was calculated on a standard funeral, carrying the coffin and flowers, and the creation of wooden models involves an additional premium. Also the ‘Lorry’ Floral Tribute was destined to be the centrepiece of the display, positioned prominently in front of the coffin.
David’s role is to exceed a Family’s expectations, not to disappoint and he felt very sad telling the Son that neither the 1950 ERF Cab nor the Welsh Flag were possible.
At 1930 hours David eventually managed to track down the lady making the Floral Tributes and found out that the ‘Lorry’ would not be made from a standard Smither Oasis or Val Spicer oasis base, but from  a 2ft x 1 ft piece of Designer Board that she probably she had  left over from another job. David suddenly realised that the ‘Lorry’ Floral Tribute was going to be around one third of the size of one made from the purpose built base that he had been expecting. Such a petit Floral Tribute could not be the centrepiece of the display and it would be better positioned against the head of the coffin. This would leave the front of the deck available and rather than offer to build a 1950 ERF Cab front, which would have meant an increase in the price, David elected to use a Welsh Flag fixed to the headboard.
David gets all his flags from Patsflags and he has the home number of Michael Tobyn who operates the business. By then it was 1945 hours and as David was dialling the number his wife shouted, ‘There won’t be anyone there at this time of night!’ As soon as David spoke Michael recognised his voice and quickly checked if a 5ft x 3 ft Welsh Flag was available, which was posted first thing the next day and David received it the following day. Some people use a flag only once, however, Patsflags have been used many times, the Scottish Saltire has appeared in Stranraer, Epping and Frome, the Irish Tricolour has featured in Birmingham and Corsham.
David left Bradford-on-Avon at 0445 hours and got to the Old Severn Bridge by 0600 hours. In the next 30 minutes David was at The Coldra roundabout, where he selected the Chepstow Road into the centre of Newport going over a roundabout, under a multi-storey car park, over an old iron bridge, up a steep residential street before turning right at the traffic lights onto the Risca Road. David then dropped onto the A467 Dual Carriageway before fuelling at Morrison’s at Rogerstone which had just opened for the day.
David arrived at Rhymney at 0830 hours and the Son of the Funeral Director opened the gates and made David feel very welcome. David was impressed with the quality of the restoration of this former Public House where excellent workmanship was evident in every detail. Even the ornate iron railings on top of the wall were stepped up in line with the steps in the wall.
David was taken around the proposed route and it became quickly apparent that it would be unwise to take the vintage lorry into Birthdir Cemetery. The tight entrance with an immediate right turn was a concern, however, the biggest problem was the roads in the cemetery that had no kerbs and one false move could have meant the lorry coming off the track with disastrous consequences.
It had been estimated that the Deceased in his coffin could weigh beyond 26 stones and some of the Bearers were concerned, however, they were surprised how David effortless secured the coffin, with him working alone on the deck. 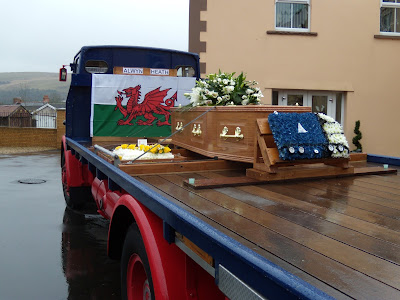 Although it hadn’t been originally intended due to some steep inclines, David was asked to take the Deceased to his home in New Tredegar and the Leyland Beaver went up the steep hill in top gear. The traffic in New Tredegar was brought to a standstill with people getting out of their cars to see the Welsh Flag. The Son of the Deceased travelled with David in the cab and on his way to the cemetery David was asked to stop the vintage lorry on the open road. This location had been the former home of the Deceased before the whole street was demolished in fear of a potential landslide, following the dreadful events that took so many lives of children in Aberfan in 1966.
David emailed 20 Funeral Directors in South Wales, who market Vintage Lorry Funerals by displaying a framed picture of the lorry in their location, regarding the reaction to the Welsh Flag. Within two days David was asked to undertake a funeral in Barry and the Welsh Flag got its second trip over the Old Severn Bridge.
A key requirement from the Barry Family was that a picture of their Loved One should be included within the display and that their Aum Asian Floral Tribute should be positioned prominently. Having never carried an Aum Floral tribute before David consulted the wall charts and data sheets that he was given by Val Spicer and Smither Oasis respectively a numbers of years ago. 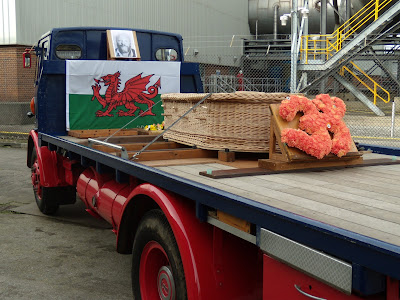 The due diligence undertaken regarding access to the local crematorium uncovered that the Deceased was thought to be over 26 stones and as a wicker coffin was to be used David was concerned about how it would handle whilst being manoeuvred into position on the deck. David phoned Darrell at Somerset Willow and found him to be most helpful. Not only did he provide accurate measurements so David could set his coffin stops, he also agreed to double the thickness of the plywood base to inhibit the coffin from flexing.
David found that Barry Funeral Directors were perhaps the most thoughtful and helpful he had come across in the past 15 years. When David arrived at 0745 hours he found that the top end of the street had been coned off, just like they said it would be and what is more, no one had parked inappropriately, which would have happened in other locations. Andy arrived at 0800 hours and took David through the shop to investigate the rear entrance and it was agreed that the coffin would be loaded at Barry Funeral’s garage facility. Rebecca bought David a bacon roll from Greggs and Chelsea made him a cup of tea. 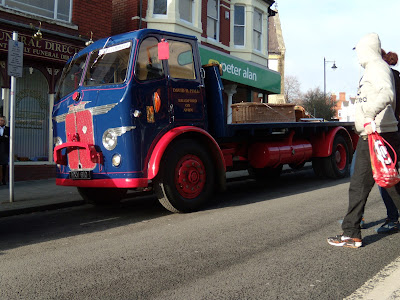 Barry Funeral Directors is in the middle of Barry situated opposite the main Bus Stop for the town centre. Numerous people waiting for or alighting from a bus came to talk to David about his lorry and six people took business cards from David’s presentation case, never has there ever been so much interest in the vintage lorry.
With people keen on his lorry outside the Funeral Directors and nice people inside, David felt he was in a special place, as if he was part of The In Crowd and David remembered the 1965 Motown hit for Dobie Gray.
A Traffic Warden came up the street checking on cars and as the Leyland Beaver had been parked in the street for over the allotted two hours David used his normal ploy of befriending the Traffic Warden. David’s strategy worked well and a ticket was never issued. In fact the distraction strategy worked too well because the Traffic Warden was so interested in the vintage lorry he left his greasy finger prints all over the cab and David had to wash the lorry, the last thing he needed when the ambient temperature rarely got above zero on this bitterly cold day.
David met the Daughter of the Deceased at the Crematorium and he felt he knew this lady from somewhere in the past. The Daughter had recently moved from Trowbridge Wiltshire and she had probably met David in a shop. She was amazed that the lamination of her Dad’s picture was prepared in Tech Office, Station Approach in Trowbridge, which she had passed often on her way to catch a train.
David left the crematorium at 1600 hours and was home by 1915 hours, not bad considering that he hit gridlocked traffic in Newport during the rush hour. So two 15 hour days, two Welsh Flag requirements and two big send offs for two big men.
Posted by David Hall at 07:40 No comments: