A Funeral in Bath


Vintage Lorry Funerals first funeral in Bath was an emotional send off for a well respected man and over 600 people attended, which is documented in the Blog September 2017. Unbeknown to David, his second funeral in Bath would attract a similar sized crowd at Haycombe Crematorium.
The second funeral in Bath was for the largest Funeral Director in the City and often when visiting Bath with his wife, David would contemplate how he would manage the logistics if he was ever asked to undertake a funeral from their small yard.
David took a phone call from a Funeral Arranger who he had known from her days working in Bristol. Kim was excellent in providing the details of the funeral, including the timings and the Family’s decision that there would be no flowers. Kim advised that the vintage lorry needed to be with them by 1330 hours, however, she provided no information on why the Deceased’s Family had chosen the vintage lorry.
The 1950 Leyland Beaver is based in a garage behind David’s home, however, the street which leads to the main road can become gridlocked with cars being deposited at inappropriate places by people needing to catch a train to Bath. Obstructive Parking has prevented Emergency Vehicles getting up the street and on one occasion an elderly lady fell at home, broke her hip, and the Ambulance couldn’t get near her house. Sadly the lady had to be carried down the street and this event led to David galvanising the neighbours to demand Double Yellow Lines. The concept has been approved, however, it takes time for action to take place so, until Double Yellow Lines are installed, David will leave the street before 0730 hours.
David was left with a conundrum, where to park the vintage lorry in Bath, a historic city with Roman Baths and elegant Georgian properties but with limited parking opportunities for any vehicle larger than a car. David spoke to the Bath Spa Hotel, one of the most prestigious hostelries in the city, frequented by famous clientele such as Joan Collins. To David’s surprise the Receptionist was most friendly and offered parking for the vintage lorry whilst David could have his morning coffee, however, she omitted to mention the £15 parking fee.
The solution involved David contacting Paul Dallenty, a Funeral Director based in Twerton, the less affluent part of the city. Paul gave David his first funeral in Bath and was delighted to help, highlighting the opportunity to park in the Bath City Football Club car park or else in front of his shop. David opted for the second suggestion as he saw a way to promote potential future business for both Paul and himself.
David arrived in the Leyland Beaver at 0730 hours only to find that a Double Decker Bus had parked in the space in front of Paul Dallenty’s shop. The Bus was waiting for School Children and the Bus Driver was very interested in the vintage lorry, taking pictures with his tablet. Then some of the children got off the Bus and took pictures with their cameras.
Sue Hart, of Paul Dallenty Funerals, was extremely kind and held up the traffic whilst David turned the vintage lorry in the street. She then parked her car to prevent anyone leaving a car in front of the lorry which would have created a difficulty for the lorry to leave later in the day. Sue then invited David to sit in the Dallenty Office where he wrote his next blog by the heat of the 3 bar electric fire. The warmth of Sue’s hospitality and the warmth of the office were most welcome on this bitterly cold February day.
David left Twerton at 1315 hours and proceeded to the Funeral Director where he was scheduled to collect the coffin. There were no flowers for the funeral, so David decided to arrive only 30 minutes before the cortege was due to depart, because it wasn’t possible to get into the yard due to the volume of parked cars. The only place available was very close to the Funeral Directors wall and then to encourage those drivers wanting to pass, to mount the kerb. 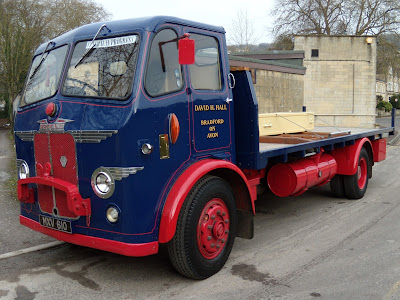 A number of people walked past and commented how clean the lorry looked and how fitting it was for someone’s final journey. Whilst a Mother was talking to David, her Daughter used her mobile phone to load up the Vintage Lorry Funerals website and asked David about the most interesting Themes he had created. David described some Themes that were related to TV shows, like a 1950’s TV Set with The Lone Ranger & Tonto on the screen or his working model of Del Boy falling through the bar from Only Fools & Horses.
As this was the hub of the Funeral Directors operation, there were a number of coffins in the despatch area and David asked which was the one that he was about to load. Approaching the coffin indicated, David became alarmed that someone had left some old rags on top of the coffin and he admonished the staff for not treating the coffin with respect. One of the Funeral Director’s Staff started to chuckle saying, ‘that ain’t rubbish Dave, that’s to go with the coffin, the Deceased was a Painter & Decorator.’ 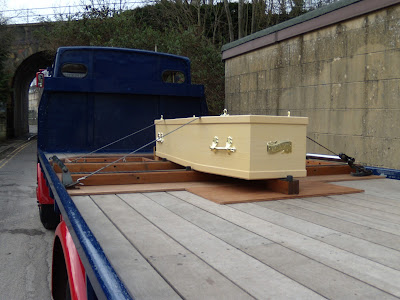 As the Leyland Beaver descended the hill down to the crematorium it became evident that Deceased was a much loved and well respected man, because over 400 mourners were outside the chapel. David gave the Family Bearers instructions how to receive the coffin and as the Deceased was being raised onto their shoulders the ‘Only Fools & Horses’ Theme tune played, much to the delight of most people in the crowd. Although David appeared calm, he was raging inside because had he known more about the Deceased he could have created his ‘Only Fools & Horse’ Theme with the working model, of the counter being lifted, Del Boy falling through the bar and then springing back up again. Two of the Deceased’s Workmates declined to go into the service and decided to talk to David about his lorry. They understood David’s disappointment at not having any contact with the Family.
The men confirmed that the Deceased’s Family would have loved to see Del Boy falling through the bar and that the extra £150 would not have been a problem, they said they would have paid £75 each to see what David had described. David shook his head and said, ‘I have a limited number of skills but being a clairvoyant isn’t one of them, and if a Funeral Director doesn’t give me access to the Family how was I supposed to know that the Deceased liked Del Boy. I hate to leave a crematorium knowing that I could have done more for a Family.’ 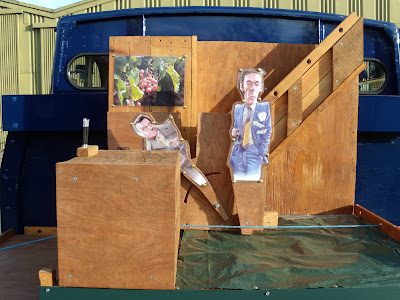 One of the men then asked, ‘Have you ever had a whole family on your lorry, you know two coffins together and then another one or two rows.’ David looked at the man and said, ‘Do you mean loading coffins side by side?’ The man nodded and David turned to the Funeral Director who had conducted the funeral and asked, ‘Why is it that a member of the public can visualise coffins side by side but people in the funeral industry can’t? David went on, ‘It is because when there are multiple bodies for a funeral a Funeral Directors eyes light up, as more coffins mean more hearses.’
The Funeral Director said that wouldn’t happen in his company, however, he accepted that David’s comments would apply to most Funeral Directors.
Posted by David Hall at 03:52