Leyland Beaver for a Funeral in Wells


On a Saturday afternoon David Hall got a call on his mobile from a family in Wells whose Dad had just passed away. David is always deeply moved when a family ring him first before contacting a Funeral Director. The funeral date couldn’t be advised as the death had not been registered yet as nothing can happen until the Death Certificate is produced.
The Funeral Director from Wells rang to say that they had a low archway. As the Leyland Beaver couldn’t get into their yard the Funeral Arranger suggested that the funeral should be transferred to a Funeral Director in the same group at Shepton Mallet, who had a sizeable yard. As the Deceased’s home was in Wells, David elected to use the Wells Funeral Director and sit on the Double Yellow Lines outside the location whilst he loaded the flowers and then move down to be opposite the archway when it was time to load the coffin.
The Floral Tributes were ‘DAD’, a ‘Horseshoe’, a 17 inch ‘Heart’, a ‘Polo Ring’, a Coffin Spray and a ‘Teardrop’. David designed a layout in which every Floral Tribute was visible and spoke to the three Florists involved regarding the measurements that he required. Mundys Florist in Radstock, who supplied the ‘Horseshoe’ were emailed a sketch of a horseshoe with key points being highlighted that needed to be measured. From the data supplied by Colin Mundy, David created a scaled diagram, a cardboard template and thence a wooden support structure that would be invisible behind the Floral Tribute. Very few people understand the time and effort David takes to get a Floral Tribute to appear to be floating in mid air. 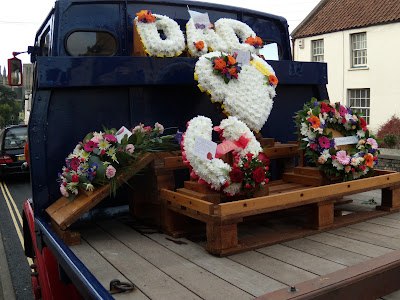 David kept the Son of the Deceased updated as the build of the various support structures progressed and he replied, ‘I have complete confidence in what you are going to do and everyone is looking forward to seeing the results of your work.’
Two days before the funeral David asked the Funeral Arranger to put out cones north & south of the Double Yellow Lines on the assumption no one would park on the Double Yellow Lines. However, David’s rational was shattered when the Funeral Arranger said that she could not guarantee that no one would be on the Double Yellow Lines when David arrived.
In preparation of what to do if someone was parked on the Double Yellow Lines, David phoned Wells Police, who said it was the responsibility of the Council, who said it was the job of the Highways Department, who said it was the duty for the Police to lift a car off the street if it was causing an obstruction!
So David decided to follow his old Dad’s advice that ‘God helps them that helps themselves.’ David formulated a strategy of arriving early in Wells at around 0700 hours when most people were still in their beds and contractors working at houses on the High Street hadn’t yet arrived. Also in order to minimise the impact of fuel price increases, David tries, wherever possible, to use Food Retailer Sites. Most Retail Service Stations don’t welcome lorries that find turning in front of the shop to be a very tight manoeuvre. The best time to visit a Retail Service Station is just after it has opened for the day when there are no cars, only White Van Men. So David left Bradford-on-Avon at 0530 hours and rolled into Tesco Shepton Mallet at 0630 hours and was on the Double Yellow lines in Wells at 0715 hours. 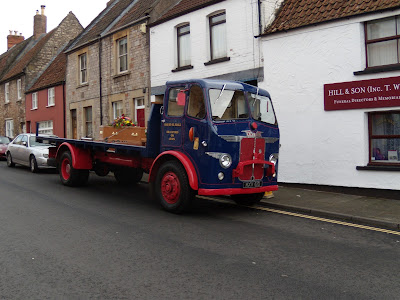 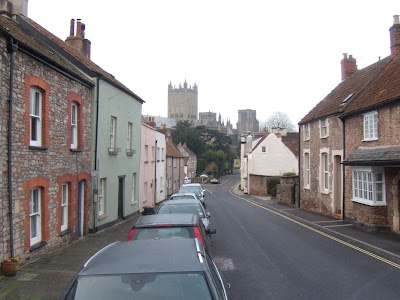 The Funeral Arranger arrived and was relieved that David had found the space he required and she told David about the problems she had encountered with cars being left overnight obstructing the Funeral Directors premises. On one night staff had collected a body from a local Care Home but couldn’t access their own premises due to inappropriate and illegal parking. On this occasion the Police were called and a Recovery Company lifted the car off the street during the night.
Wanting to post a letter David asked where the nearest post-box was, which turned out to be just down the street and only 100 yards from Wells Cathedral. David’s only regret was that he didn’t post the letter 5 minutes earlier as he could have witnessed an amazing spectacle. The Wells Cathedral Clock dates from 1390 and is the oldest working clock in the world. Every fifteen minutes inside the Cathedral two figures from the 14th or 15th century strike a bell with a hammer and on the outside two rings of jousting knights appear to be charging at each other some 100 feet above the ground. The clock was wound by hand for over 100 years by descendants of Paul Fisher a Jeweller and Horologist in the town.
The Son of the Deceased had originally intended to travel in the cab with David, however, at the last moment he declined as he was needed in the limousine to comfort his Mum. So a gentleman from Liverpool, called ‘Scouser Steve’, travelled with David from the house in Wells to Shepton Mallet Crematorium. As David changed gear Steve smiled and his eyes lit up as the sound and smell from the Leyland 600 engine reminded him of the happy times he had spent with his own Dad, travelling in a Leyland Octopus along the East Lancs A580 Road in the early 1960’s. 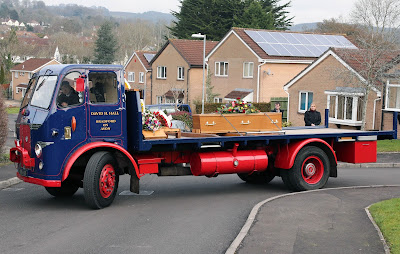 After the service the Son of the Deceased shook David’s hand and thanked him for his professionalism and his attention to detail. Unbeknown to David the funeral was videoed for Somerset Live and was posted on the internet which is one of the best marketing opportunities that Vintage Lorry Funerals had been involved with that had not been initiated by David.
Posted by David Hall at 08:41