With the Kelsey Media decision to merge The Classic Commercials Enthusiasts Show with The Tractor Show, David Hall looked for a new venue to widen the awareness of Vintage Lorry Funerals.
Having been to the Basingstoke Festival of Transport many years ago and had funeral referrals from people looking at his pictures, David, in May 2017 decided to renew his allegiance to the show which is held on The War Memorial Park in the middle of the Hampshire town. The Basingstoke Festival of Transport is run by The Thornycroft Society in recognition of the town being the manufacturing location of Thornycroft vehicles from 1897 to 1977.
David spoke to Tom Mansbridge in The Thornycroft Society to check that there would be no problems with the Leyland Beaver deck having an exhibition of 24 pictures from previous funerals. A phone call to John Bond established that the gates would be open at 0800 hours and David confirmed that he would be there around 0815 hours. 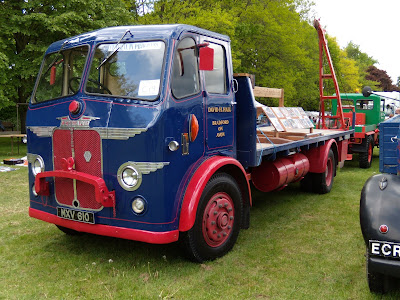 The Leyland Beaver left Bradford-on-Avon at 0600 hours on Sunday May 14th and the roads were very quiet. After collecting a paper from Popham Services on the A303, David was at the entrance gate in Crossborough Hill at 0810 hours, and the Leyland Beaver was one of the first lorries on site. Luckily the Marshall positioned the Beaver next to the walkway within the circle of stalls, selling everything from plants for gardens through to parts for vintage lorries. David looked up and saw that the line of portaloos was only 100 yards away and he envisaged that a good footfall of visitors would be passing the Leyland Beaver, and David wasn’t wrong.  Below are examples of the people who stopped to talk to David and take a Vintage Lorry Funerals Business Card.
Before the gates opened to the public at 1100 hours, a number of owners of vintage lorries came to see the 1950 Leyland Beaver, including John Doe from Ash who has a similar vehicle to David. John & David spoke about spare parts that are required to run Vintage Lorry Funerals.
One member of the public came forward to shake David’s hand, explaining that he had taken a picture of him in action in Dart Road in Farnborough in July 2015. David immediately recalled that it was Jamie Madden’s funeral, a very sad send off for a young man killed under his own car. The gentleman who took the picture explained that he used to work for the BBC and he promised to email David a picture, once he had been able to find it!
Later in the day one of the Funeral Bearers at Jamie Madden’s funeral came forward and introduced himself. He was a former Police Officer who had been trained to visit families to inform them that a close relative had been killed in a road crash and this empathetic skill set has proved most useful in the funeral world.
An elderly man with a white stick and a younger companion stopped to talk to David. The man was 93 and had previously worked at Thornycroft in the administration department. Once David understood that the gentleman was not partially sighted but totally blind, he took him by the hand and led him to the front of the Leyland Beaver. David then guided the man’s fingers over the chrome BEAVER letters and he spelt out, ‘ B E A..oh it’s a Beaver! There should be Leyland above it with wings either side.’ So David guided his hand further up the Radiator cover and the gentleman smiled. David asked if he could place a business card in the man’s top pocket suggesting that he should give it to someone who needs it. The elderly gentleman said, ‘That someone will be me.’ 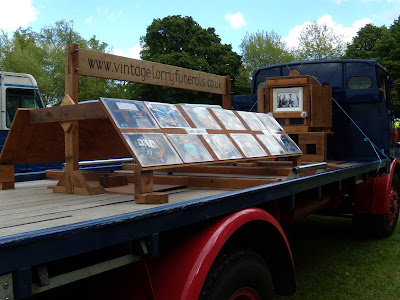 One lady looked at the Lone Range & Tonto on the replica 1950’s TV set and said ‘Clayton Moore & Jay Silverheels.’
Roy from Kent and his mate John expressed an interest in how David uses reclaimed timber to create support structures for the Floral Tributes. David said that the most significant use of previously discarded material was the 1950 Leyland Beaver. David explained that lorries that had run up and down the country in the 1950’s were put off the road overnight in the 1960’s. Construction & Use legislation failed the ratchet hand-brake of the Leyland Beaver, the 7ft 6 inches wide deck was too narrow for sea going containers and the top speed of 30 mph was deemed too slow for the forth coming motorways. David said that one of the Leyland Beaver’s biggest perceived weaknesses in the 1960’s was now one of its greatest strengths as the 7ft 6 inch width is ideal for the gates of most cemeteries.
David was attempting to draw a comparison between Vintage Lorry Funerals and Motown Music where Berry Gordy had found a new use for Jazz Musicians whose heyday had been in the 1950’s. David said to Roy, ‘Everyone knows about Smokey Robinson and Marvin Gaye but most people have not got a clue with regards to who played the instruments.’ John then interjected, ‘ Dave, it was the Funk Brothers. Earl Van Dyke on piano, James Jamerson on bass, Benny Benjamin on drums, Robert White on guitar, Jazz Musicians in the 1950’s who were used by Motown to produce that unmistakeable sound. So Barry Gordy did the same as you did Dave taking something from the 1950’s that had been written off in the 1960’s and finding a new use that couldn’t have been evident at the time’ David thought that he couldn’t have put it better himself. John then explained that he was in a Rhythm & Blues band.
Roy told David that he worked for McLaren Racing and he agreed with David that he modern Racing Drivers weren’t the same standard as Jim Clark in the 1960’s and Juan Manuel Fangio in the 1950’s. Roy recalled how Fangio had arrived at the start of the 24 hour Le Mans race, where two drivers take shifts to drive one car, only to find that his Co- Driver had not arrived. So Fangio decided to drive non stop for 24 hours and he won the race because he saved time not having to stop to change drivers. His great weakness proved to be his greatest strength. David confirmed that this was also his understanding and when the hot sweat was dripping down Fangio’s back he pretended that it was cold water from an alpine stream. Roy said that it was all about mental strength and David explained that long distance funerals often involved him off-loading the coffin at the crematorium and then having an 8 hour drive home.  On the way home, David goes through towns during the evening rush hour, incurring the wrath of motorists and a total shift of 15 hours. David needs a touch of Fangio’s mental strength as the concentration during a 15 hour shift is immense. Imagine if you are going into work at 0900 hours and you are still there and about to leave at 2400 hours! 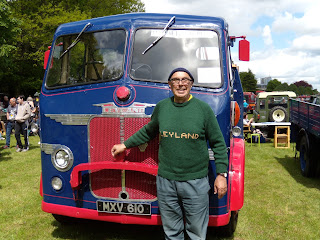 Bob Ledger spoke to David about his love of Leyland Lorries that he had driven in the 1970’s. So strong was his love for Leyland Lorries that his Mum knitted him a jumper with LEYLAND emblazoned across the chest. David asked if he could take his photograph for this blog and Bob asked if he could have a copy of the picture sent to him through the post as he didn’t have a computer. Bob offered to pay for the postage but David declined the offer saying that he would gladly do this once he had finished preparing for his next funeral. 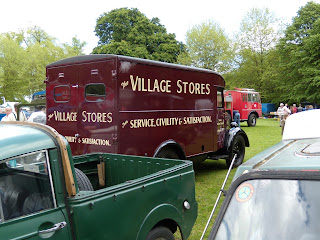 The van parked in front of David bore the logo, Service, Civility and Satisfaction which was used on a local delivery vehicle from a village store in Hurstpierpoint. Civility is a word from the 1950’s which is seldom exhibited in today’s brash culture. However, David thought that the order was wrong, surely it should be Civility, Service and Satisfaction!
Posted by David Hall at 03:54