A Funeral in Denmead

Most of Vintage Lorry Funerals trips involve an early start with the Leyland Beaver rolling out of Bradford-on-Avon in the dark. The journey to Denmead was no exception departing at 0500 hours on an August day when dawn was just about to break.
David enjoys the early starts as he witnesses sights that most people don’t see. It is magnificent when the top of the sun peeks above the horizon and then slowly emerges into an orange football. David has 1950 styled sun-shades that clip onto his spectacles that can be flipped up during normal conditions, but flipped down in bright sunlight. Often in the early morning David sees animals and on this trip he had a rabbit trying to outrun the Leyland Beaver in Holt. However, the most surprising sight was a herd of White Belted Galloway cows near junction 9 of the M3, some 500 miles from home.
The other amazing thing about early morning starts is that in David’s experience people are more courteous. At fuel stations where David stops to buy a paper he can find Scaffolders who will hold the door back for you and White Van men who will say ‘after you’ as you both approach the newspaper rack.
The funeral in Denmead was Vintage Lorry Funerals first for South Downs Funeral Services, a company started by Paul Lee-Bapty in 2011 and he has built up a successful business in both Denmead and Wickham by operating services at the highest quality. In David’s experience there is a huge difference between someone who conducts a funeral for a large organisation as opposed to the man who owns the company.
Initially David was worried how well he and Paul would get along, however, his concerns were unwarranted.  On the day of the funeral David saw that Paul’s determination to achieve the highest service levels were no different to his own. 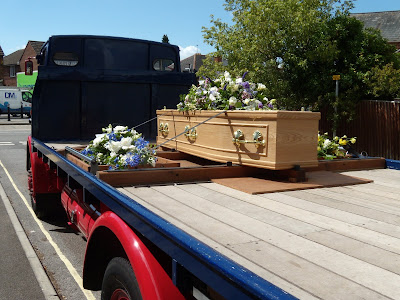 Paul wanted David to reverse the Leyland Beaver into his driveway, however, David decided to leave the lorry on the street, a decision that would later prove beneficial. As David was preparing the lorry deck to receive the flowers and coffin a number of passersby expressed interest and took a Vintage Lorry Funerals Business Card. These individuals included:-
David found it interesting that the South Downs email address doesn’t start with info@ or mail@ but care@ and David saw a high level of care demonstrated when Paul started to page the lorry from his premises.
In a display that in David’s opinion had a strong military feel and perhaps a small piece of Michael Jackson’s Thriller video, Paul commenced the paging process by bowing towards the radiator of the Leyland Beaver. Instead of turning and walking forwards like everyone else in the funeral world, Paul stepped backwards and used the fingers on his outstretched arms to entice the Leyland Beaver out of the side road like a Lion Tamer controlling a Lion, but having no whip. Paul continued to walk backwards still beckoning the Leyland Beaver until he reached the white line in the middle of the road. With the Leyland Beaver positioned halfway out of the side road, the traffic moving toward Portsmouth was brought to a standstill on the B2150. Paul seemed unconcerned about the traffic travelling from Portsmouth which was speeding past his back, only inches away.
Paul then enacted a military turn, faced the oncoming traffic, stopped it and then continued to page in the traditional way. The military feel was also exhibited at the crematorium. When the coffin was about to be off-loaded two South Down’s men were next to the lorry, and another two were standing next to their vehicles. Paul then called out the name of one of his men standing next to his vehicle and the man then quickly walked to the lorry. Paul then called out the name of the remaining South Downs man still with his vehicle and he then also walked quickly towards the lorry.
The four South Downs men then positioned themselves into two rows of two, facing each other either side of the coffin. Paul then joined them, he faced the head of the coffin and bowed. Paul and the two men either side of the coffin then took one step away from the edge of the lorry in a synchronised way taking the coffin with them. On Paul’s command he and the two men took a further step away from the edge of the lorry, whilst the two remaining men took one step forward and touched the coffin. At this point the coffin was about 4 feet beyond the roller and with Paul’s next command everyone took a further step away from the lorry edge and the coffin was now in their hands and was held at the same height as it had been on the lorry. None of Paul’s staff spoke at any stage and you could have heard a pin drop before Paul’s command and the coffin was then lifted to shoulder height. 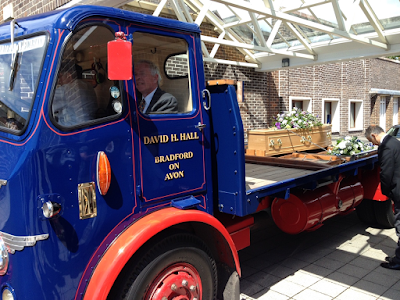 It was a fantastic spectacle, however, some people in the funeral world have no doubt been disrespectful about Paul’s paging and conducting style. David was impressed with the level of theatre that Paul had created and he reflected that Paul and David were not that far apart in their aims to do their absolute best for a family. In the past David has been asked to dress like Fred Dibnah, to talk like Fred Dibnah and at a funeral in Guildford David was asked to be Fred Dibnah!
On the way home David encountered queuing traffic on the M3 between junction 11 and 9 with a high volume of vehicles wanting to be on the A34 on this Friday afternoon. On the A342 David tried to get cars past whenever possible but once a queue of at least 10 cars were trapped behind the lorry at 30 m.p.h. David looked for a lay-bye. This is something that modern Lorry Drivers won’t do and some people think that David is a Knight of the Road, but David dismisses this concept saying it is only commonsense. In David’s experience he can upset some of the people some of the time but it is best not to upset all of the drivers all of the time, because frustrated drivers can attempt dangerous things. Once David pulled into the lay-bye 10 cars sped past, two or three gave a friendly toot of their horn as a ‘thank you’ but there is always one who will put his or her hand out of the window and make an offensive gesture.
The traffic was gridlocked on the Melksham bypass due to rush hour traffic and David got home at 1730 hours but the drama didn’t end there. David’s wife always walks down the street to guide David as he tries to manoeuvre around obstructively parked cars. However, on this occasion David’s wife noticed that a young toddler had escaped from a garden in Highfield and had wandered out onto Woolley Street where cars speed up the hill in a rat run to get out onto the Bath road. Luckily David’s wife acted swiftly and plucked the young child out of harms way just in time as a car raced by. David arrived two minutes later and was oblivious to what had just happened. In the garage after his wife had checked that the brake lights were working she told David what had nearly happened. David then thought what was worse, a child nearly killed by a car or parents who didn’t seem to comprehend the danger that their bundle of joy could have been in.
Posted by David Hall at 06:33