Interesting people in the Cab

David Hall has had some interesting people in the cab of his Leyland Beaver during and after a funeral, and three examples are described below.
David was involved in perhaps his saddest funeral in Easthampstead Cemetery for a 32 year old, Jamie Madden, who had lost his life, whilst working under his car. The Deceased left a young wife and two children, a son aged almost 3 years and a daughter aged 11 months. David felt the family’s loss more than any other funeral because Jamie was the same age as David’s own son and Jamie’s son was the same age as David’s Grandson would have been had he not tragically passed away in June 2014, after only 15 months on this earth. Loosing his Grandson Freddie affected David deeply, he carries his picture above the windscreen in the cab and he often looks at the empty space above the seat that David had created next to the engine for Freddie, which he never saw. 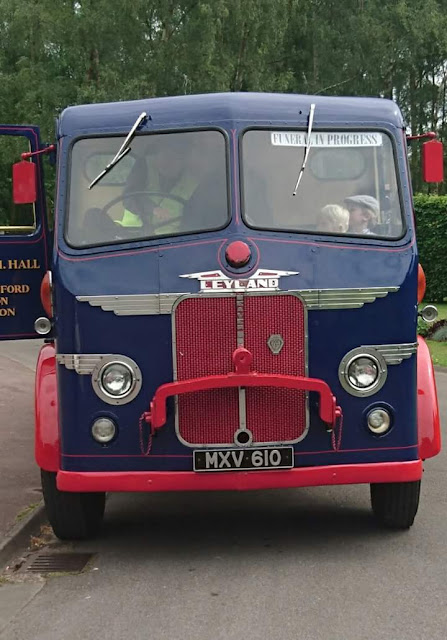 It was unbelievable that on the anniversary of Jamie’s death that David should be back in Easthampstead and some amazing things happened. Two young boys were attending their Granddad’s funeral and the older one Austin Stratford, aged 5 at the time, came over and asked David if he could have a ride in the Leyland Beaver. David then spoke with Austin’s parents who agreed that he could take Austin and his brother Dawson, aged 3 at the time, from the Flower Area at the crematorium to the cemetery.
The two young lads were lifted into the passenger side of the cab, Austin sat on the passenger seat and Dawson immediately sat on the seat that David had built for his own Grandson Freddie. Dawson smiled at David in the same way that Freddie had whenever he saw David. Fearing that the noise from the Leyland 600 engine may upset Dawson David took his Ear Defenders and put them on the 3 year old’s head. However, Dawson took off the Ear Defenders and said, ‘Don’t worry, I’m not frightened.’
During a funeral from Calne to Semington Crematorium David was under the impression that the Deceased’s son Stuart Smith would be travelling in the cab with him. However, when David arrived at the house there was a change of plan and the Deceased’s Granddaughter Sara Jane Smith would accompany David. Sara wore trousers and climbed into the cab without a problem. 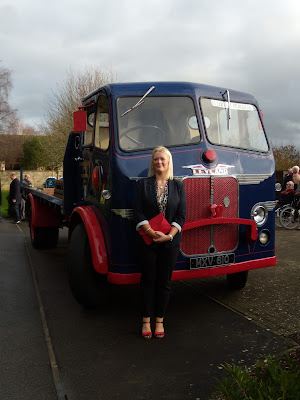 Sara works in the motor industry and knows her way around a modern day lorry and she made some comparisons between the 1950 Leyland Beaver and those she normally sees. She said, ‘So no heater, no power steering, no synchromesh gearbox.’ As she was counting out the differences on her fingers she looked around the cab and asked, ‘and where does the driver sleep?’ Driver replied, ‘Back in the 1950’s Sara a driver never slept!’ David later explained in an email to Sara that large companies such as B.R.S. used to Double Shift a vehicle with a day man unloading and then reloading the lorry before handing over to a night man. He drove to another depot through the night and then slept in digs whilst his lorry was unloaded and reloaded. So the lorry was never still and nobody slept in the cab. There were, however, smaller operators who used drivers that were less likely to obey the rules which limited a working shift to 11 hours. It is said that those drivers hardly ever slept in their cabs and when they did it was on a wooden board laid across the engine, or on the sheet rack on top of the cab or in amongst the load if the vehicle was a box van.
For a funeral in Hollywell, North Wales, Shaun Parry, Grandson of the Deceased, paid for the funeral and asked to travel with David Hall in the cab because Shaun had his own haulage business. On the road to Pentrebychan Crematorium David asked Shaun if he had inherited the business from his Granddad and Dad. Shaun laughed saying, ‘I started the business myself and I employ my Dad who drives for me.’ Shaun went on to explain that after leaving school he became a trained Diesel Mechanic with Scania Trucks and then joined a local coachworks that built tipper bodies. During the evenings Shaun was engaged by a friend, who owned 8 Volvo Tippers, to service the fleet, which involved undertaking monthly inspections and rectifying any defects that had to be sorted that night.
So whilst his colleagues at the coachworks were spending their evenings in the pub, Shaun would be in his boiler suit, hammer in his hand checking wheel-nuts. Shaun banked all the money he earned and enjoyed watching it grow. Then Shaun had an opportunity to buy two Foden Tippers second hand, having secured regular work 5 days per week from a local quarry. The Drivers took their instructions from the quarry staff, enabling Shaun not to be distracted whilst he was fitting tipping equipment at the coachworks.
David was also very grateful that Shaun let him park the Leyland Beaver in his garage the night before his Granddad’s funeral and for providing transport to and from the B&B. 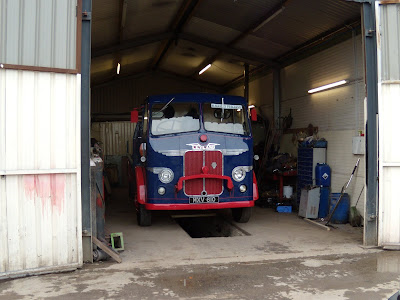 David told Shaun that it was an honour to meet a young man who had made a good living for himself and his family by hard graft. In these days, in David’s opinion, too many young people don’t know what they want to do, drift into university rack up huge debts and come out of the process with no career prospects. Too many opt for an easy life and would rather sit at home playing computer games and the thought of doing an 8 hour shift followed by a 4 to 8 hour period of work which requires intense concentration, would be beyond their comprehension.
Posted by David Hall at 02:01