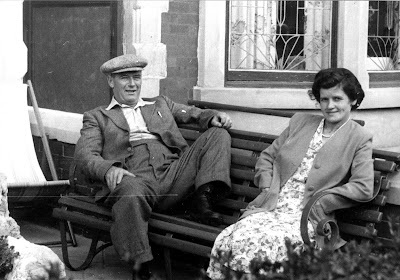 Albert and his wife, who everyone called Ma, visited Alice on the Sunday and there was an immediate chemistry established between David and Albert who christened him ‘Mr. Crockett’, after the western character Davy Crockett. Albert and Ma took David back to Lazonby in their Standard Vanguard and he spent the next two weeks there whilst the Crankshaft of the A40 van was replaced. The Austin van was repaired by Lace Brothers Garage in Lazonby who were great friends with Albert Kelso and it is understood that Albert encouraged Howard Lace to give the A40 priority and also to sharpen his pencil when it came to their costings.
Ma Kelso always called David M’Lad and held his hand as they went up the stone staircase of Croft House, leading David to an enormous bedroom. That night David slept right through with no lorries going over manhole covers to keep him awake, only the sound of sheep bleating in the fields. 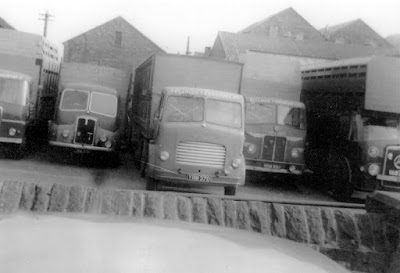 David spent the next two weeks in the cabs of livestock collection lorries taking sheep, cattle and pigs from farms into the Auction Mart at Penrith, which was then in the middle of the town but now is a Morrisons Supermarket. David was normally a bad traveller on car journeys, however, he never felt sick in a lorry which was much higher and he could see animals in the fields over the top of hedgerows.
Albert Kelso had built up a very successful business buying second hand Leyland Beaver chassis from BP and other oil companies who had discarded their vehicles after 5 years, in line with their large company depreciation policies. These chassis cabs were painted grey with red mudguards, and a wooden deck, with a lift-off livestock container which was created by the team at Fellside Transport.
Albert was a great admirer of Leyland Beavers as the vehicle was robustly built, a 120 b.h.p. engine that would go up Shap Fell on the A6 in top gear and had an amazing lock which meant that a Leyland Beaver could get into a tight farmyard entrance that other lorries couldn’t access.
In 1957 Albert gave David a Leyland Cap Badge which David still uses today on his Beret as he drives his Leyland Beaver in funerals. John Kelso took over the business when Albert passed away in 1971 and in 2004 David received a package in the post from John and Ma Kelso. It was an AA Badge that had been on one of the lorries. The picture below shows David in Cwmbran with his Drivers Qualification Card, which all Lorry Drivers must now possess. 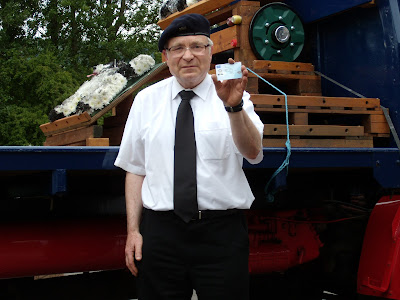 In 2018 sadly only Alice Threlkeld and Alan Kelso, Albert’s Grandson are still around. David regularly writes to Alice updating her of developments and he often recalls that during the 1950’s she was the only person in Unthank who had a telephone, everyone else gave the number of the call box in the centre of the village as their ‘personal’ phone number. When the phone rang any passerby would answer it, ask who was speaking and who they wanted to contact, before running to tell Eric Mason that a relation was on the phone. The ladies of the village used to take turns in cleaning the Telephone Call Box. 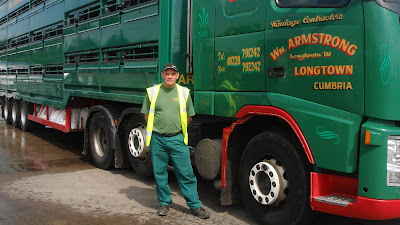 Alan Kelso is probably the youngest person to obtain a Driving Licence, passing his test at 0930 hours on his 17th Birthday driving a 3 Ton Commer Lorry from Fellside Transport. He is still involved in livestock movements, managing this part of the Armstrong of Longton business. He works exceptionally long hours, however, he is always available to discuss any points David needs advice on regarding the 1950 Leyland Beaver.
Posted by David Hall at 09:50 No comments: