The best New Year’s gift for a Self Employed man is a phone call about a job early in the New Year and David was pleased to get a call on January 3rd from Emma Clay Funeral Arranger at John Stuart Funeral Directors in Melksham, Wiltshire. Melksham has proved to be a good location for Vintage Lorry Funerals. The Leyland Beaver has previously worked in the town for Bewley & Merrett and 5 times for D.J. Bewley whose premises are on Bank Street, on the opposite side of the road to John Stuart Funeral Directors.
The opportunity arose because a Farmer’s Family had asked Emma Clay if she could find a Farm Tractor to pull a trailer to carry their Dad’s coffin and some hay bales, however, the Tractor which John Stuart had previously used for a Farmer’s Funeral was deemed to be too modern. As the Family were looking at the photograph of the ‘modern’ Tractor the Son of the Deceased happened to notice a framed picture of the 1950 Leyland Beaver and said, ‘That wagon is of the right age’, and it is the first time that David has been given a job solely because of the lorry’s age of 69 years.
Emma phoned David, explained that the Family would like hay bales to be carried on the lorry, then she sent a copy of a picture of the Farm tractor pulling a trailer with a coffin and hay bales. Emma said that the hay bales were important and the Family could provide them if David couldn’t find any himself. The Family didn’t want the modern round shaped bales but the old fashioned rectangular bale shape which was initiated in 1936. The traditional way that Farmer’s funerals are undertaken is for hay bales to be loaded onto the deck of the trailer, single stacked, forming a C shape and thereby enveloping the front part of the coffin, which in David’s opinion looked wrong. His idea was to stack the bales in front of the coffin to create a display with significant height, which everyone would see, and have the coffin distanced from the hay bales so that it could also be clearly seen. David then designed a Hay Rig Theme using 5 bales stacked in three levels, depicting hay bales being collected off the field and taken to the farm.
For those of you who have never worked on a farm then you should know that handling rectangular hay bales is a nightmare because parts of the hay become untangled from the bale and leave pieces of hay everywhere. David envisaged that if the Family had provided the hay bales that there would be horrendous implications for John Stuart Funeral Directors, carrying hay in their vehicles and for West Wiltshire Crematorium, as the hay bales would have been deposited in the flower area for someone else to collect.
The solution was for David to supply the hay bales, fix them in place in his Garage at Bradford-on-Avon and keep them on the lorry during and after the funeral. David also knew a man who could help him, Jim Pethers, one of Vintage Lorry Funerals Support Team, who has a Landscape Gardening business and he also has a small holding with cattle. Jim has been an amazing help to David over the years providing a number of items, notably a Victorian Rail Porter’s Sack Barrow, a 1950’s Milk Churn and a series of antique gardening tools. Jim arrived on a Saturday afternoon with 4 hay bales and one bale of straw and David showed Jim a sketch of how the Hay Rig Theme would look, with vertical poles at the rear to stop the bales slipping backwards. 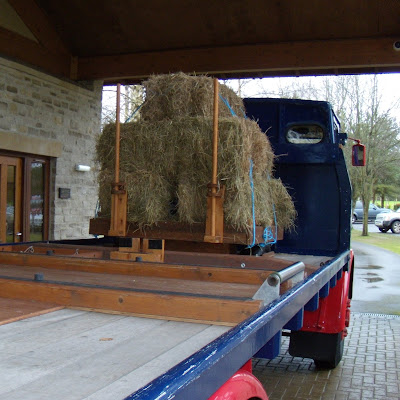 The key flower tray which would support the hay bales has been used many times before. It supported a Sack Truck in Highworth earlier in 2017/2018 and has been part of some of David’s memorable Themes, including ‘A Dolls House’, ‘Del Boy falling through the Bar’ and a ‘Tanker Refuelling a Plane’.
The vertical poles had also previously been used during a Frome funeral, in a horizontal way as part of a ‘Horse Jump Theme’ for someone who loved horses, but unfortunately the crematorium was too far away for a Horse & Carriage to travel.
As the hay bales were being stacked onto the support structure David’s wife became aware of all the pieces of hay that were falling off the bales and she informed David that he should allow extra time after the funeral so that she might hoover the deck telling him, ‘that hay will get everywhere, we will still be finding strands of it for months.’
So a plan was in place for David to use the bales during the funeral and afterwards he would take them back to the farm in Southwick, offload them and then help feed the cattle.
Emma when providing information on the coffin, made David aware that it was made of plywood which would be strong enough and exposure to rain wouldn’t matter for the short journey down the A350 road to West Wiltshire Crematorium at Semington. However, the weather forecast didn’t look great for January 23rd so David decided to use his see-through sheet which can keep a coffin dry no matter how heavy the rain is. 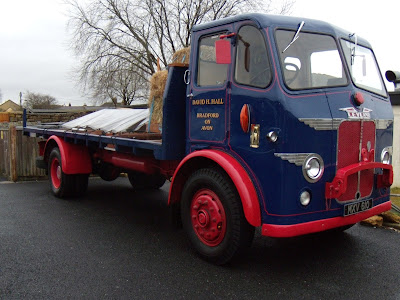 It is David’s opinion that some Funeral Directors may try to highlight a perceived wet weather weakness for Vintage Lorry Funerals in an attempt to dissuade a family from using the lorry. The truth of the matter is that David has carried the see-through sheet in a cover beneath the deck of the lorry since he started undertaking funerals in 2002. It has been rarely used, only twice previously for the funeral of a man in Nunney whose Family wanted him sheeted like a load, despite there being no rain and a Cardboard Coffin in Snodland for which the sheet was used solely to secure the coffin on a sunny day. David normally finds that although it can rain whilst he is loading the flowers, invariably the rain stops when the coffin is presented to the side roller on the deck. The only issue Vintage Lorry Funerals has regarding bad weather is that David Hall hasn’t marketed the use of his sheet well enough to confirm that his lorry is one for all seasons. 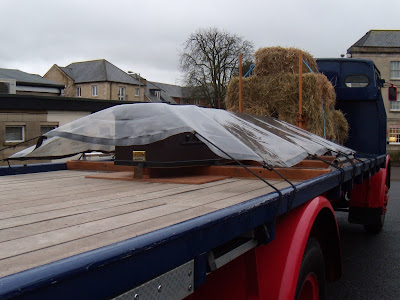 So David and his wife put the sheet in place in their garage the day before the funeral and David slept well cognisant that he had in place the right facilities for a plywood coffin. When David got up at 0600 hours there was torrential rain and as he ate his breakfast he knew that he had made the right decision with the sheet. However, as David was putting on his boots he noticed that the rain had stopped and it never came back during the funeral.
The back roads in Wiltshire were covered in water spilling off the fields, however, the 1950 Leyland Beaver was in place in the car park behind John Stuart Funeral Directors for 0745 hours. Emma arrived at 0815 hours and gave David a Car Park Permit. The coffin arrived from Devizes in a hearse and the team helped David put the sheet in place once the coffin was loaded. Everyone was amazed how quickly the sheet was secured and how it protected the coffin. One of the Bearers, who had an old Fire Engine, was very interested in the quality of the paintwork on the Leyland Beaver and he found it hard to believe that most of the paintwork was untouched since 1996, with David’s wife providing regular protective coats of polish.

This funeral provided many good things:-