A sign of the times for a Redfield Funeral

David received a phone call from a lady in Bristol whose father had passed away. The Deceased, like David Hall, was a member of Commercial Transport in Preservation, a club with over 130 members nationwide with an interest in vintage vehicles, and the Deceased’s expressed wish was that his final journey should be in his CTP Jumper on the back of Vintage Lorry Funerals Leyland Beaver.
David had known the Deceased, who used to buy and sell Models from a stall erected at the finish point of the CTP Bournemouth to Bath Road Run and he had amassed a wonderful collection of models, enamel signs, motoring memorabilia and mugs at his home. The Deceased had been a Window Dresser for Horne Brothers Menswear and his skill-set in arranging items was very evident in how each model or sign was exhibited in the hallway and conservatory of his home.
In thinking how David could personalise the funeral, he envisaged that a 3ft x 3 ft Shell Retail sign would look good in front of the coffin and he knew where he could borrow one, as Michael Moore, from Steeple Ashton, had previously lent David one for a funeral in Fleet in 2007. The Daughter of the Deceased was delighted with the concept that David had described, however, her Mum would be happy with anything that David did, because his beautiful lorry was all that she had expected. David has rang Michael a number of times over the years and he is part of the Vintage Lorry Funerals Support Team, however, sadly on this occasion he couldn’t help because two months ago someone broke into Michael’s garage and stole the Shell Retail Sign and other petrol memorabilia. 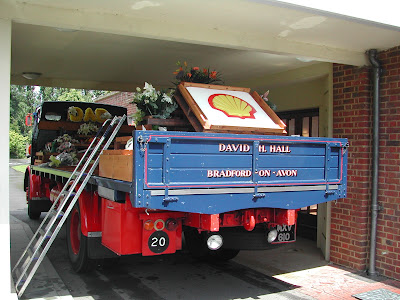 Not wanting to disappoint the Daughter of the Deceased David rang around his network of contacts. Jim Pethers, a landscape Gardener, who has helped David many times said that he would have loved to have made available an Esso Sign that hung on his garage door, however, someone had stolen it earlier in the year. David was scratching his head wondering who could help him and he rang Alex Mathews of Norton Garden Machinery, Kilmersdon, on the off chance that Alex may know if any of his customers collected signs. Alex said that they had a Briggs & Stratton sign in the loft that had lain there for over 30 years and David could use it if he didn’t mind cleaning it up.
The obvious solution would have been to use a sign from the Deceased’s collection, however, the Widow was living away from home and no one could access any items from the amazing collection. So David sent an email featuring the picture of the Briggs & Stratton sign which was 3ft x 2 ft and asked what she thought. As this was a small engine company sign which wasn’t in the Deceased’s collection, the Daughter was a little reluctant at first, however, she suggested that David should get some pictures of petrol signs from the internet and put these either side of the Briggs & Stratton sign.
David’s wife found Shell & Nation Benzole Petroleum signs, enlarged them to the appropriate size and Tech Office in Trowbridge laminated the signs. The layout was designed so that the Shell & Nation Benzole signs would appear to be floating unsupported as if they were at a petrol station in the distance, a bright light ahead on a lonely dark road. 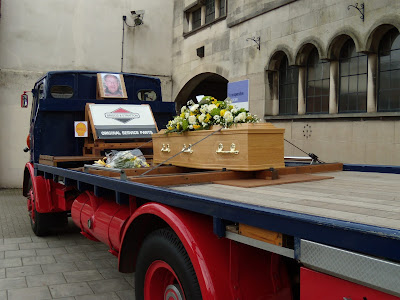 It may seem ridiculous to some that David leaves for a funeral in Bristol about the same time he would leave for one in Birmingham, however, the traffic in Bristol becomes gridlocked from 0715 hours. David’s strategy is always to beat the traffic and be parked at Redfield by 0615 hours as he had done previously in two funerals he had undertaken from the site in 2002 & 2011. The staff members at the Funeral Director were good and Terry has been involved in all three funerals, he was formerly a Mobile Crane Driver for Sparrow so he knew all about David’s Leyland Beaver. Terry was also impressed with David’s CTP Jumper, which the Deceased’s Daughter had asked David to wear and Terry knew it was the same as the Deceased was wearing before the coffin lid was secured.
David elected to reverse into the Holy Trinity Church car park off the busy A420 road and had made arrangements with members of CTP to stop the traffic. David started to prepare the coffin for unloading when he was approached by the Widow who insisted on shaking David’s hand telling him that he lorry looked lovely. Wanting to concentrate 100% on his role as a Carriage Master David normally doesn’t like any distractions, however, he made an exception in this case and it was a moment that he will remember for ever. 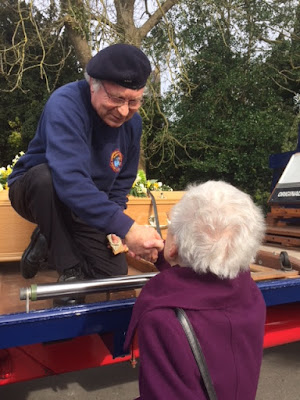 The final destination was Westerleigh Crematorium and David had been there 7 times before and when he entered the site he signalled that he was intending to take the first exit at the roundabout, however, the Funeral Director shouted, ‘No, no Dave, go straight across we are heading for the new Woodland Chapel.’ David quickly realised that Westerleigh had created an additional facility in their car park that included a chapel and the Willow Tree Café. However, as David approached the porte cochere he noticed that the roadway was narrower and the turning tighter than the main chapel and the only way that he could access the covered area was to put one wheel on the grass. Once the Leyland Beaver was under the canopy it was evident that David needed to be as close to the supporting posts as possible to create space to off load the coffin. Terry stepped forward and guided David to where he needed to be, he even offered to stay until after the service to help David get out of the covered area. 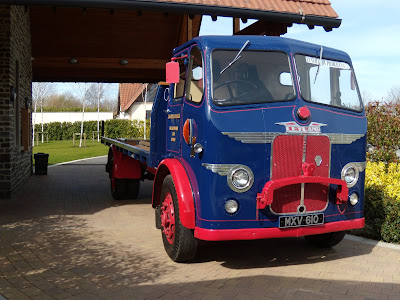 One week after the funeral David received a cheque from the Widow as a gratuity and a card which said, ‘Congratulations on the wonderful condition of your vehicle. I enclose a small cheque towards the cost of the upkeep.’
David returned the Briggs & Stratton sign to Norton Garden Machinery in a slightly cleaner state than he had collected it. Whilst he was there one of the customers commented that his Daughter-in-Law, who lives in New York, had given up her job to concentrate on buying and selling old enamel signs and she makes a good living!’
Apparently the Briggs & Stratton Sign is thought to be worth $400 and the current trend of people in Wiltshire stealing signs to fulfil a demand is sadly a sign of the times.