Piano Theme on the Leyland Beaver in Rugby


David Hall spoke with a family who had booked to use the Leyland Beaver in Rugby and found out that the Deceased had enjoyed many evenings playing a piano in local Public Houses, enthralling his fellow drinkers with his rendition of Queen’s ‘We are the Champions’. The Deceased could not read music and he had no classical training, but he was skilled at listening to tunes and then playing them by ear. So much did playing the piano feature in the Deceased’s life that his family chose a Colourful Coffin adorned with a piano graphic which looked stunning.
The Deceased had also been a Newcastle United Fan and part of the family’s request was that a Newcastle United scarf should be included in the display which would also feature the Floral Tributes, ‘DAD’ and ‘GRANDAD’. David’s prime objective is to personalise a final journey and many people think that David efforts are way beyond that of any other Carriage Master. David requested a Head & Shoulders photograph of the Deceased which David’s wife skilfully cropped and it was enlarged and laminated by Vintage Lorry Funerals Support Partner in Trowbridge. David made a sketch of his design concept which involved fixing the A3 picture of the Deceased to the Headboard. Placing the Newcastle United scarf around the back of the picture of the Deceased would then create a scene depicting the Deceased holding his scarf at a game. As the final journey would be from Rugby to Coventry, along the A45 Dual Carriageway, it was a cardinal condition that the scarf was securely fastened. David planned that the ends of the scarf should be fixed to the ends of the ‘DAD’ Floral Tribute, which would be placed above the ‘GRANDAD’ Floral Tribute.
As the scarf was being brought down from Newcastle the day before the funeral, David asked that the scarf be measured and sadly he found that the scarf was shorter than he had envisaged. The ‘DAD’ Floral Tribute would need to be raised so that the bottom of the ‘DAD’ would be the same height as the ends of the scarf. This then created a hole between the ‘DAD’ and the ‘GRANDAD’ and whilst he was contemplating his options of what to do next, he checked his email and found a picture of the Colourful Coffin. David thought a Piano Theme would be the ideal solution. 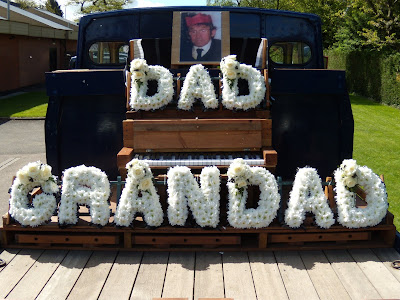 David’s role in funerals is to exceed the expectations of a family and this was the prime consideration for creating the Piano Theme, however, Geoff, Vintage Lorry Funerals Support Worker, reckoned it was mainly for several pieces of 30 inch long timber to have a ride out to Rugby. When David designs a theme he always seeks to use existing lengths of timber that are already stained in Antique Pine and have been previously used in a funeral. This strategy saves the cost of buying new timber, however, there is always a time factor involved for David to find the right piece of wood!
Notable contributors that had previously been used included:-
David previously had been given a length of Skirting Board which had been undercoated in white paint and this was tailor-made for the keyboard. David spoke with the Chief Mourner and she was delighted with the developments and agreed that the Piano Theme should be built. However, David did not disclose that the Piano lid would be held open during the journey to Coventry, and it would be closed in Canley Crematorium in order to signify that the Deceased’s piano playing days were now at an end. 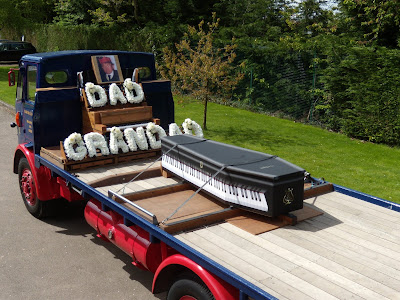 David decided to use the Fosse Way to travel to Rugby and although this is the shortest way, the road has no Services and the only toilet facilities are at Tesco, Stow-on-the-Wold which are not open before 0600 hours. David spoke with Ainscough Crane Hire, a company which has a depot at Princethorpe, just south of Rugby and their management agreed that he could call in en route if a comfort stop was required. The Leyland Beaver left Bradford-on-Avon at 0500 hours and travelled the 93 miles to Rugby in 3.5 hours. Everyone at the Funeral Directors came out to see what David had created and they were amazed at the quality of his work and his attention to detail.
At Canley Crematorium the Funeral Director who was conducting the funeral gathered the family around the Leyland Beaver as David bowed towards the coffin, closed the lid and once again bowed towards the coffin before he assisted the Bearers to transfer the coffin off the vintage lorry. The Chief Mourner came to thank David after the service saying that he had created a most fitting final journey for her Father. 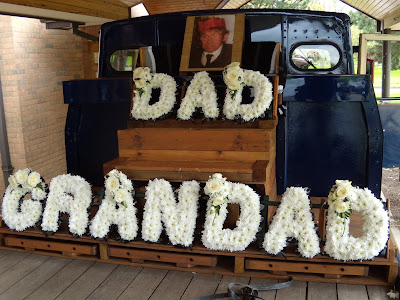