David Hall received his third funeral from a Bristol Funeral Director and was told that the coffin would come from Colourful Coffins in Oxford with a John Wayne livery, incorporating pictures and sayings from the great man during his roles in Western Films.
Apparently the Deceased had been a big John Wayne fan and this struck a cord with David whose own Dad also loved the Duke. David came from a humble background in the frugal 1950’s and David’s Mum & Dad took on extra jobs solely to put food on the table. The only night out that David ever had with his Dad was a trip to the Odeon Cinema in Sunderland, during 1969, to see True Grit in which an aging John Wayne played a one eyed Marshall called Rooster Cogburn.
John Wayne also played an important role in David’s Dad’s life towards the end of his time on this earth in a Care Home in Penrith. David’s Dad had fallen out of bed, cracked a vertebrae in his spine, was in constant pain and always very restless. David arrived one Saturday night at the Care Home just as a John Wayne Western was featuring on his Dad’s TV. David sat with his Dad and watched the whole film during which his Dad never complained about his pain and thanked David for being with him. David’s Dad passed away the following week.
David wanted to personalise the Bristol funeral and initially looked at the concept of incorporating a saddle within the display of Floral Tributes, however, the Daughter of the Deceased asked for a lower key Western Theme. David and the Daughter of the Deceased agreed that a rail should be created like those outside a Livery Stable, that horses were tethered to, in Western Films. The Floral Tributes were a ‘Pillow’, an ‘Open Heart’ and a 2 feet by 1 foot designer board with the Deceased’s hat fixed to it. David envisaged that it could be fastened onto the ‘Horse Rail’ and secured at 45 degrees with no apparent support. David felt that if he got the angle right for the Floral Tribute containing the Hat, then, when viewed from the rear of the deck, the scene would depict footage from the Mclintock Film when John Wayne throws his hat towards a weather-vane.
David looked through the stack of wood in his lean-to and found a 3.75 inch diameter post that had been in the ground since 1950 and was only replaced when the bottom rotted away. Having located the timber that could be salvaged for the ‘posts’ part of the ‘Horse rail’, he had to find a ‘rail’ and develop a strategy of how to fix the ‘posts’ to the deck of the 1950 Leyland Beaver.
On Saturday May 19th 2018 whilst most of the population in Britain were watching the Royal Wedding in the morning and the FA Cup Final in the afternoon, David and his trusty helper Geoff were using a 1960’s hand tool to create a 3.75 inch diameter in two lengths of 8 inch by 2 inch timbers. Geoff’s Uncle had bought the implement in 1961, confirmed by the receipt which was still in the wooden case, but had never used it. David & Geoff have used it a number of times in the past 16 years to create holes of various sized diameters which were a cardinal element of the particular Theme that David was working on at the time. 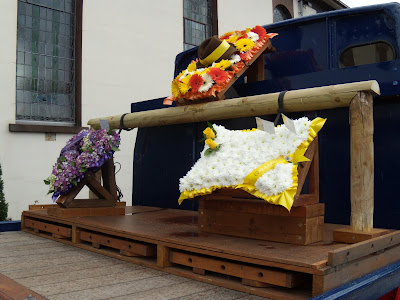 Two 4 inch half round fence rails were purchased from Mole Valley Farmers and fixed onto the posts. The support structures for the ‘Open Heart’ and ‘Pillow’ were  fixed in front of the rail and David felt it would be fitting if  the Floral Tributes could be tethered to the rail, in the same way that horses had been in Western Films. David knew who could help, Charlie Todd, who is a member of the Vintage Lorry Funerals Support team, as she has three horses. David had taken Charlie’s Dad on his final journey on March 31st 2005 and has kept in touch with her ever since. Charlie provided a Horse Bridle which was the centre piece of the rear display for a Travellers funeral in Liss on November 30th 2010. Charlie was delighted to hear from David and asked him to come to her home to collect the reigns. Charlie and her husband Kev were very pleased to see David and introduced him to their friends who were visiting. Kev said, ‘There is never a week goes by without Charlie and me talking about what you did for her Dad and reliving various aspects like when you went down the hill at Haycombe Crematorium. All the people in front of you were pointing for you to go to the right to avoid the canopy but you went left and went straight under the canopy with less than an inch to spare either side.’ David said, ‘I couldn’t do that now, because they have built an island in the road to stop me,’ however, he was humbled by the fact that Charlie and Kev still talk about the funeral some 13 years on.
The Bristol funeral was for a Funeral Director whose main office is in the centre of the city, the location from which David did the funeral of Gerald Sleith aka ‘Santa Claus’ on April 25th 2013. David had no problems getting into the yard at 0630 hours, however, when he was due to leave on the funeral his exit was prevented by the inappropriate parking of cars. The choice was either to wait for the Police to come to lift the car out of the way and miss the slot at South Bristol Crematorium or to force his way past the obstacle. David had no choice and opted for the later, however, in his attempts to avoid damaging the car, which was blocking his path, he elected to catch the Funeral Directors gate damaging the rear of his lorry and the wrought iron gate. David always includes a Lessons Learnt sheet in the plastic wallet for every funeral, so David asked if he could load the coffin and the flowers for the John Wayne Themed funeral in Hanham at the Funeral Director’s satellite office. 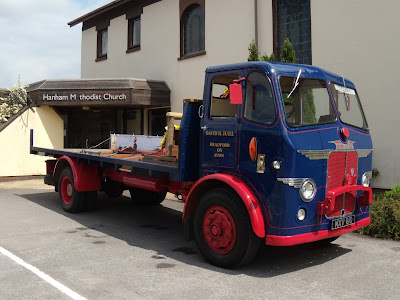 Whilst there would be no inappropriate car parking in Hanham, never the less parking was an issue as the space behind the location was taken by Builders working at the site. David solved the problem himself by speaking with the Hanham Methodist Church which has a large car park opposite the Funeral Directors rear door and the gentleman he spoke with was very helpful and even went down to the yard to measure the clearance between the gates.
This Bristol funeral was a first for David because he had his breakfast and coffee at home before leaving at 1030 hours and this was only possible now that Double Yellow Lines have been installed in the part of Bradford-on-Avon that David lives. David was instrumental in solving the inappropriate parking issue as one elderly lady fell in her bath, broke her hip but had to be carried down the street in agony as the Ambulance was prohibited from getting up the street due to inappropriately parked cars.
David went through the centre of Bath and took the A431 road from Bath to Hanham which was totally deserted as most car drivers elect to use the A4 and the ring road. He arrived at Hanham around 1130 hours and drove into the Hanham Methodist Church’s yard which only had two cars in it. The Floral Tributes were exactly as the Florist had described, however, David was concerned about how the hat was secured to the Floral Tribute and he took appropriate measures to ensure that neither the hat nor the ribbon around the hat came off during transit.
The coffin arrived from the centre of Bristol and the Funeral Bearers remembered David from previous jobs. Two remembered the ‘Santa Claus’ funeral and the ‘Anchor’ Floral Tribute which appeared to float, with a chain attached and one was involved with the Temple Cloud Funeral that caused gridlock at Windmill Hill and how David rebuked the Police for their insensitivity towards a disabled Lady who was in some distress.
The journey from Hanham to the house in Bedminster involved going down Crews Hole Lane to avoid the City traffic and it was only possible because the Leyland Beaver is 7 ft 6 inches wide (8 inches narrower than a modern lorry), has wing mirrors within the width of the lorry (a modern lorry has wing mirrors that extend beyond the width of the lorry) and the Leyland Beaver has an incredible steering lock unsurpassed by any vintage or modern vehicle. 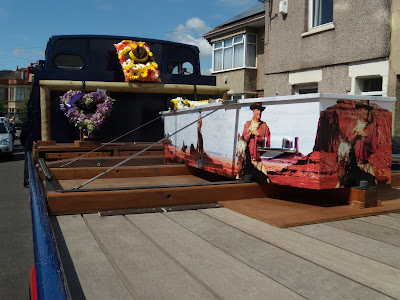 The traffic on the A38 came to a standstill as David reversed into Churchlands Road and stopped outside the Deceased’s house. The Daughter of the Deceased shook David’s hand and thanked him for what he had done. Walking around the rear of the lorry she commented how her Dad’s hat lined up with John Wayne’s hat which was pictured on the head end of the coffin. The Deceased Son-in-Law, commented, ‘Look at the amount of time and effort David has taken, we are lucky to have a man who likes the detail.’ 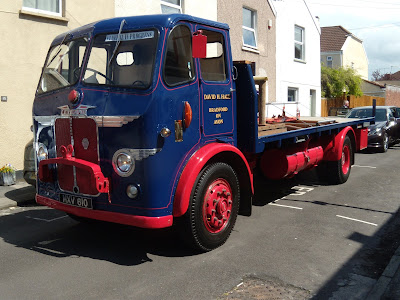