The funeral of a 17 year old in Bognor Regis

In July 2018 David Hall was asked to take a 17 year old on his final journey, Angus Jones, who had tragically lost his life in a road traffic accident near Chichester. Some 17 year olds look like men, however, when David was given a picture of Angus he saw a young lad with angelic features. In working on funerals of young people it is important to always anticipate the unexpected, because grief can affect people in different ways. Having previously undertaken the funeral of a 14 year old boy in Horfield David was suitably experienced and decided that he would do all that he could to make the display on the lorry perfect. 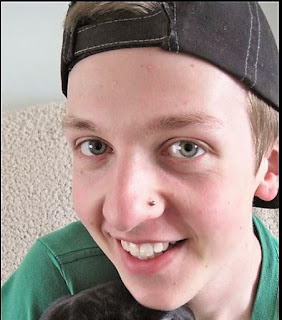 Finding out about the flowers wasn’t easy as the main Florist was Angus’ Mum, who David didn’t want to bother too often given that she had tragically lost her Son in such a horrendous accident.  Also the second Florist was a lady who worked in a Market Garden during the day, could only be contacted on her mobile between 1800 and 1830 hours and texts were the only way to relay messages. Both were lovely ladies and experienced Florists so minimal communication would suffice. Two Floral Tributes created by the Angus’ Mum were Picture Boards on plywood boards, 48 inches x 24 inches and 15 inches by 15 inches with a Floral Design attached to the centre, the larger one featuring a life sized Guitar. The other Floral Tributes were ‘Ace of Spades’ 36 inches x 24 inches, ‘SON’ and a ‘Single Note’, a Floral Tribute which David had never had the pleasure of carrying before.
Initial evaluation of the design options determined that the ‘Guitar’ 48 inches x 24 inches and the ‘Ace of Spades’ 36 inches x 24 inches were too wide to go side by side against the headboard with the other Floral Tributes. David decided to place them back to back, fixing them to a roof like structure at the rear of the deck. David had used this technique previously and looking at his contemporaneous notes, which are included in the plastic wallet for each job, he knew the best strategy to pursue. David used existing timber to form a central support which was only an inch thick and he envisaged that this would enable the Family to be able to look through the rear structure and have an uninterrupted view of the coffin and the display at the front of the deck.
Having never carried a ‘Single Note’ before and having no possibility to email drawings to the Florist, David decided to contact Val Spicer Designs who make the oasis bases. David spoke with Charlotte, explained his predicament, and asked if a ‘Single Note’ base could be taken from the warehouse and a trace made on some cardboard. David is indebted to Jay Spicer and his team for all the help he received as the template arrived via DHL and was fundamental in the design of how the ‘Single Note’ would be secured. The ‘Single Note’ was 24 inches x 12 inches and this determined the height of the front display as it was desirable to keep the ‘SON’ and 15 inch x 15 inch board at the same height and by raising these two Floral Tributes, space was then created underneath to offer positions for any third party flowers that may arrive.
David took advice from his own Daughter, who is talented at playing the piano, about how best to present the ‘Single Note’ Floral Tribute. By placing the Floral Tribute between the second and third of 5 black lines on the board then this would depict ‘A’ when played with a right hand at a keyboard, thus emphasizing the first initial in Angus . 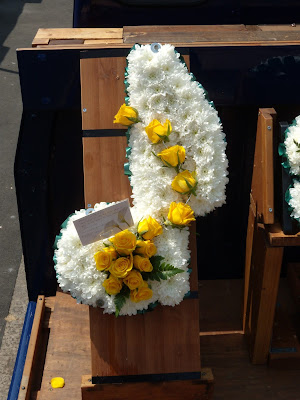 Staff members at Reynolds Funeral Service were excellent, very attentive and most immediate. John, who conducted the funeral, was known to David as they had previously worked together when John was employed by Southern Cooperative for funerals in Peacehaven and Worthing. John measured the Pictorial Board Floral Tributes which arrived the day before the funeral and the thickness of the boards, was as David had expected, which would enable an innovating method of securement to be used. One problem was that the 15 inch x 15 inch Pictorial Board was in fact 16 inch x 16 inch and this precipitated 30 minutes work for David, changing the support structure so that this Floral Tribute would still appear to float. 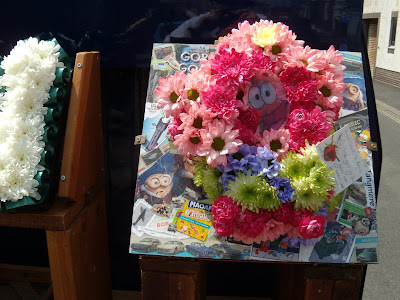 The journey down to Bognor Regis from Bradford-on-Avon took 3.45 hours and involved travelling on lesser known roads, like the unclassified Morestead road near Junction 10 of the M3 near Winchester, which no one knew about 15 years ago, however, many commuters now use this as a rat run. David took the B2150, turned left towards Clanfield and picked up the B2149 to Emsworth. David then took the A259 which runs parallel to the A27, before joining the A27 and the queuing traffic stacked back from the A259 Bognor road roundabout.
David arrived at 1045 hours, 15 minutes earlier than he had suggested telling Reynolds staff, ‘You are better off looking at me, than looking for me!’ John came out to meet David and made him a cup of tea. A number of cars travelling along the street stopped to admire the 1950 Leyland Beaver and some people commented how good the old lorry looked. John explained the route that was required including a visit to the Church Hall, where people from the village would say their good-byes to Angus and the Tangmere Airfield Museum which Angus used to visit as a boy, fascinated to hear peoples’ experiences from WWII. The route would avoid the A27 but the cortege would pass the Chichester District Council site where Angus had worked as a Bin Man. 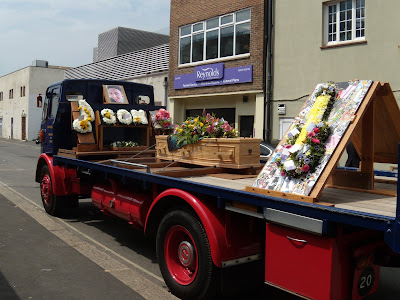 Vier, who is the Handyman for Reynolds Funeral Services, helped David load the large tablet Floral Tributes and Vier was amazed how well the Floral Tributes fitted into their allotted space. However, it wasn’t until David got out his camera did he realise how good the clear view was under the large Floral Tributes, towards the coffin and the Floral Tributes at the front of the deck and he reflected that this was perhaps one of the best displays that he had ever created. 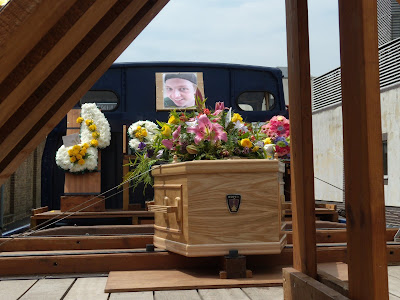 As David approached Tangmere Airfield he saw the Chichester District Council Bin Lorry which would follow the 1950 Leyland Beaver and David drove slowly past the planes and the line of people who had stopped work in respect for Angus. David was then invited to drive on the old runway to turn and he saw the old Traffic Control Tower, for which funds are being raised for it’s restoration. Money in lieu of flowers was destined for this fund and David felt it was most fitting to restore a facility which had played such an important role in WWII. Tangmere was one of the main airfields used during the Battle of Britain and Douglas Bader was based there before being shot down in his Spitfire and it was also the place which many SOE Agents last saw of England before being dropped behind enemy lines. Violette Szabo left Tangmere on June 8th 1944, two days after D-Day on her second mission, was captured, executed by the SS at Ravensbruck Concentration Camp and subsequently awarded the George Cross. David drove back through the Airfield Museum and took photographs of the F4 Phantom Jet whose colour scheme was not too different from the 1950 Leyland Beaver. 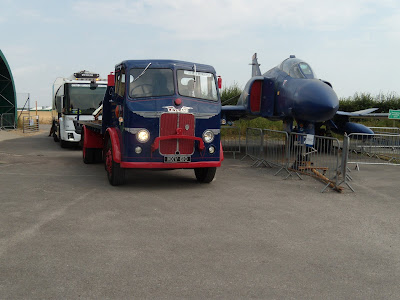 David reversed into the car park of the Village Hall which was lined by around 100 people. Everyone was silent and then suddenly everyone started to clap and some shouted Angus Jones’ name.
David entered the grounds of Chichester Crematorium and found that a Guard of Honour was there made up from Bin Men each with a Green Bin and there must have been over 200 people at the crematorium. David vacated the canopy quickly moving the lorry some 20 yards to create space so that the area under the canopy, or porte cochere to give it the official title, could be used as an extension to the chapel. 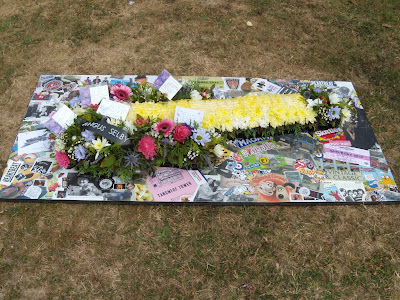 The journey home coincided with the evening rush hour, however, David minimised the delays by taking the Havant turn off the A27 and then taking the B2177 to Wickham and then towards Junction 11 of the M3. David took a break at Sutton Scotney Services and got back to Sainsbury’s in Melksham to fuel up just before the site closed. The Leyland Beaver was the only vehicle there and the female attendant was most interested in the lorry. She asked if she would see the lorry again and David said, ‘More than likely, I have a funeral in Portsmouth in 4 days time and one in Southampton on the last day of the month!’
David got home just before the 15 hours shift length limit and reflected about the events of the day in which the Leyland Beaver had definitely brought some colour to a very dark day.
Posted by David Hall at 11:09