When speaking to Pam the lady making the Floral Tributes for a Luton funeral, David Hall, became aware that there would be a number of Floral Tributes including a ‘Swinging Open Heart’ , a ‘Flat-Bed Lorry’, a 12 inch ‘Heart’, a 12 inch ‘Polo Ring’ and two ‘Pillows’. For David this was like going back ten years when most funerals involved 4 or 5 Floral Tributes, whereas in these uncertain economically challenging times, the volume of Floral Tributes has declined and sometimes family members club together to buy one large Floral Tribute.
David found out that the Deceased had driven a Leyland Beaver with a Blue & Red livery, identical to MXV 610 and when the family of the Deceased saw a framed picture of David’s lorry at the Funeral Directors, the Son said, ‘We’re having That!’
The Florist, who was a niece to the Deceased, asked David to email her a picture of his lorry so that she could match the colours she would use in the ‘Flat-Bed Lorry’ Floral Tribute. David, however, was more interested in the ‘Swinging Open Heart’ as he had carried one before but it wasn’t as big as the one the Florist was creating, which was estimated as being 45 inches long.
When David knows that he is going to carry a Floral Tribute that he has never carried before he has contacted Smither Oasis and Val Spicer who make the oasis bases. For a funeral for a 17 year old boy in Bognor a ‘Single Note’ Floral Tribute was ordered by his Grandad and David spoke with Val Spicer who kindly traced around the Floral Tribute onto cardboard, which they posted to David to use as a template. This enabled David to position the ‘Single Note’ on a board having black lines across depicting it was on a sheet of music, and the position of the ‘Single Note’ signified the A note. The family thought this was wonderful and very fitting for their Son, Angus. Smither Oasis had previously been extremely helpful sending David actual bases for a series of standard ‘Hearts’ which enabled him to create support structures in the shape of a ‘Heart’ so that it would appear to be floating.
The ‘Swinging Open Heart’ was a Smither Oasis base so David rang to see if someone could take an item of stock from the warehouse and then make a trace onto cardboard. Unfortunately the lady David spoke with was unable to help him because she wasn’t prepared to cut the plastic bag as this would have reduced the value. David was disappointed and suggested that given the importance of this Floral Tribute to the family, they should cut the seal and then reseal it in a new bag, however, this sadly was not possible.
David mentioned to the Florist that he was struggling to get a template made for the ‘Swinging Open Heart’ and her Husband asked to speak with David. John, Pam’s Husband said, ‘I have some wallpaper left over from when we last decorated the house, I could trace the ‘Swinging Open Heart’ and then post it to you.’
David has often found situations when people in a big company could have provided help but won’t and then someone who has no need to help, steps up to the plate. John went beyond his brief, traced the Floral Tribute and then drove from Slough to Bradford-on-Avon to hand the template over to David.
John came through the door of David’s garage with a roll under his arm and with David’s help he rolled out the template on the deck of the Leyland Beaver. John had made templates for all the Floral Tributes and he said, ‘I thought that these may be of some use for you in future funerals.’
John and David then worked together and had an interactive discussion how best to support the ‘Swinging Open Heart’ looking at a number of options which David laid out on the deck of the Leyland Beaver. David’s first priority is to attempt to use existing stained wood, perhaps in a new way, which is beneficial as it reduces the cost both in time and money if new wood was required which then had to be stained.
The best option for the ‘Swinging Open Heart’ that David suggested to John was to use a triangular Support Structure which had been used many times before to carry:-
§                     A ‘Butterfly’ Floral Tribute in Snodland.
§                     A 24 inch ‘Heart’ Floral Tribute in Swanley.
§                     A ‘Car’ Floral Tribute in Bristol.
The triangular Support Structure was also used in a Theme to depict the wingtip of a Plane being refuelled by a Tanker for a funeral in Gosport.
By placing lengths of 4 x2 timbers around the triangle, the shape of a suitable support Structure for the ‘Swinging Open Heart’ was created and John was amazed at the extent of David’s huge wood collection. John took a close look at the Leyland Beaver and was very complimentary about the condition of the paintwork on the 1950 lorry. 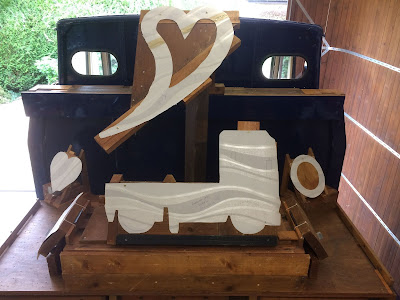 David left Bradford-on-Avon just before 0600 hours for the funeral at 1500 hours which gave him until 2100 hours to get home. As the Leyland Beaver was climbing the A46 hill on the outskirts of Bath David noticed that the temperature of the water in the engine started to rise beyond its normal level and towards the top of the hill the needle on the dial was still climbing. David resolved that if the temperature hadn’t stabilised by the time he crossed over the M4 roundabout he would stop and investigate what was causing the problem. As David stopped at the traffic lights on the M4 Junction 18 roundabout he noticed that the temperature had stabilised at a higher lever than normal and David decided to keep trundling on with his first stop scheduled to be at the Co-op Foodstore in Long Hanborough, which has a large rear yard and a Manager who permits David to use the staff toilet.
David then took the A44 around Oxford and then selected the A418 through Aylesbury, the A505 around Leighton Buzzard and finally the A5 into Dunstable. The Leyland Beaver just fitted onto the apron in front of the Funeral Directors and David was pleased that the journey had taken only 4 hours 20 minutes, including the comfort stop at around 0830 hours. The Funeral Arranger was pleased to see David and showed him a ‘DAD’ Floral Tribute which had turned up unannounced and the Funeral Arranger was concerned as it was not on the Sketch that David had drawn and agreed with the family. David said, ‘No worries, I always try to expect the unexpected’, as he created a ‘pop-up’ ‘DAD’ support structure at the rear of the deck. 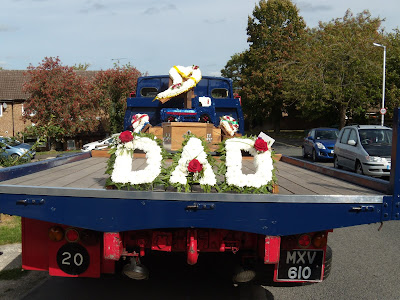 The bulk of the flowers were at the family home and David had to load the coffin at the Funeral Directors and then load the flowers later. This is not David’s preferred mode of operation because the Deceased in the coffin must always be respected and no flowers can be positioned temporally on the coffin. Also the straps over the coffin present a trip risk. David has also learnt that the risk of damaging a Floral Tribute goes up exponentially with the number of times a Floral Tribute is handled. David positioned himself on the deck and members of the family and Funeral Bearers handed up the flowers, but instead of waiting for David to request a specific Floral Tribute, Floral Tributes were just deposited haphazardly on the deck. This meant that when David was attempting to lift the ‘Flat-bed’ Lorry tragically it snapped and David needed some assistance to help him fix it to its stand. However, once it was fixed to the board the problem was not evident and the family thanked David for all the care he was taking. David thought that it would have a complete disaster if a hearse had been used because the two halves of the ‘Flat-Bed Lorry’ Floral Tribute would have been left on the floor of the hearse. 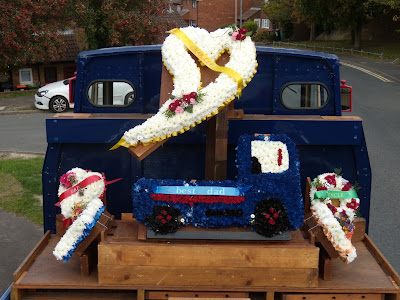 At the crematorium the ‘Swinging Open Heart’ was taken from its stand and placed on top of the coffin and the family were delighted that the ribbon was still in place. 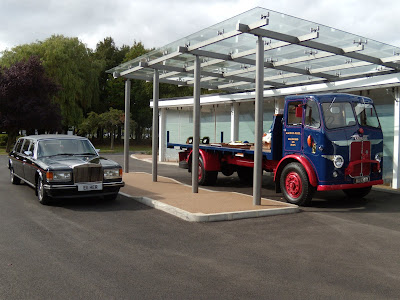 On the way home, David found his way through Luton and he took a break at Thame Services on the A418 to let some of the rush hour traffic subside. The route home involved the A420 from Oxford to Swindon and also diverting onto the B4508, which runs parallel to the A420, to avoid stretches of the A420 which are only single carriageway with inherent problems of getting reluctant overtaking drivers past the vintage lorry. David refuelled at Sainsbury’s in Melksham at 2030 hours and was home by 2100 hours.
An inspection of the Leyland Beaver to investigate the higher operating engine temperature found that the rear bolt holding the dynamo had sheared and the dynamo was being held by only two front bolts, causing it to twist, which resulted in the water pump and the fan not turning as quickly as they should have done. The head of the bolt had gone but the thread of the bolt was still in place even after a 255 mile journey which luckily limited the movement of the dynamo and kept the fan belt in place. John Satchell, of John Satchell Motors, who looks after the maintenance of the Leyland Beaver, came to David’s garage and had a new bolt in place in no time at all. John had recently replaced the same bolt in March earlier that year and it is amazing how the original bolt remained in place for 67 years and a modern bolt only last 6 months.
John is responsible for the maintenance of over 550 pieces of equipment (Tractor Units and Trailers) runs a three bay workshop in Westbury and employs 6 Mechanics. However, he always finds time after work to look after the Leyland Beaver. David is always grateful for everything that John does and David’s wife always prepares a light snack which sometimes in the summer John eats at the garden table and probably for the first time that day he relaxes and listens to the birds in the garden.
Posted by David Hall at 03:42