A Professor’s Final Journey in Bassett 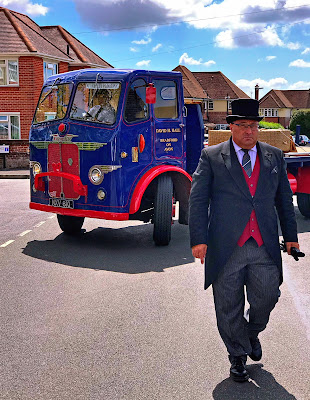 The family home was less than 300 yards from the church and David Eason stopped the traffic on the busy A35 road to enable David to reverse into the street and next to the family home. The widow came out to meet David and to his surprise she handed over an A4 envelope that was labelled ‘Information for the Driver’. Normally information for David to write Obituary articles is often sparse and most difficult to come by and getting it on the day of the funeral with voluminous hand written notes and pictures was certainly a first. 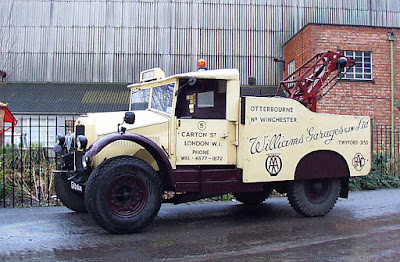 It was at this point that David realised that he knew the Deceased whose hobby was restoring vehicles including a Morris Breakdown Lorry. This used to partake in the CTP Bournemouth to Bath Road Run and often ran just in front of the Leyland Beaver in the days when David took part. Recently the Deceased had concentrated on the restoration of vintage cars like a 1926 Bean 12 Tourer which he had used in the Daffodil Run and won a prize, a picture from this day was included within the display at the head of the coffin. 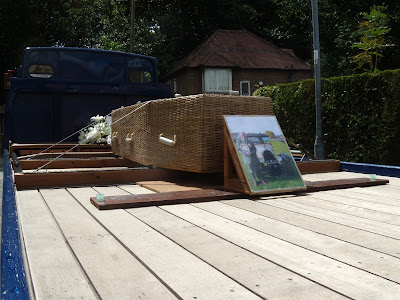 David Eason had undertaken detailed research of the best way from the house to the crematorium on the east side of Southampton avoiding low bridges, vehicle width restrictions and areas with known high traffic densities.
The Leyland Beaver pulled into Wessex Vale Crematorium some 15 minutes early and the huge crowd gathered for the funeral watched intently as the lorry was positioned beneath the porte-cochere. The coffin spray had travelled very well and the lilies looked fresh. The picture of the Deceased was quickly removed from its stand and was placed with the coffin during the service.
When David got home he had a cup of tea with his wife and found that his mobile phone was working again. He also told his wife about the events of the day and reminisced about the 1950’s and the AA Boxes. David pulled out his ring of keys which included an AA Box Key from the 1950’s. David remarked that something that was felt invaluable in the 1950’s had no use now apart from being the tool of choice to remove foreign material from the soles of his boots.
Posted by David Hall at 11:53 No comments: