When David Hall was awarded a funeral with Roy Quinton in Walsall he was given the name of the Florist and told that a Coffin Spray would be ordered. David phoned the Florist primarily to introduce himself, as he guessed that the Family wouldn’t be placing an order until the following week but he was wrong. The phone call to the Florist generated some unexpected information because in addition to the Coffin Spray there was a 3 ft by 2 ft ‘Butterfly’ Floral tribute.
In designing the layout it was paramount that the ‘Butterfly’ was displayed prominently in front of the coffin. David had carried a ‘Butterfly’ previously in Snodland on September 17th 2015 when it was part of multiple Floral Tribute display and it was secured to a board that was fixed to the Headboard. The support structure that supported the ‘Butterfly’ in Snodland was a triangular shaped board that David has used many times before, but on this occasion it was flanked by two 5 inch by 2 inch angled ends. Although the support structure held the ‘Butterfly’ without any problem, David was concerned about how much of the wooden structure that could be seen. David always attempts to exceed expectations and he has the drive to look for continual improvements. 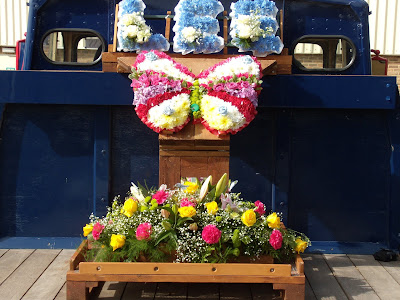 For Floral Tributes that regularly feature, like a 17 inch ‘Heart’, David has boards with a shape that closely follows the contours of the oasis base, enabling the Floral Tribute to appear to be floating in midair, seemingly unsupported. However, for Floral Tributes that don’t appear on a regular basis David can’t afford to cut a board to the shape of each and every Floral Tribute and he makes the support structure from a number of pieces of wood from his large collection.
Whilst David was evaluating how to improve his strategy for carrying a ‘Butterfly’ he received a phone call from Maureen Burks of the Florist, Marguerites of Leamore, who informed him that the ‘Butterfly’ would be presented on a stand which would allow the Floral Tribute to be seen in all its splendour at the crematorium. David, however, was more concerned about how to secure the ‘Butterfly’ and its stand. He told Maureen that he had previously carried Floral Tributes on a metal stand and he mentally made plans how to accomplish this, sending an email to her with pictures of ‘Boxing Gloves’ previously carried on a metal stand in Horfield at the funeral of a 14 year old Traveller Boy. 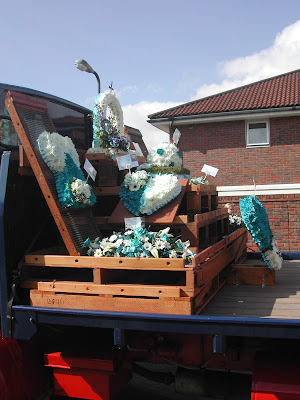 Maureen rang David to say that he was wrong in assuming a metal stand as the ‘Butterfly’ would be on an oasis stand bought from the wholesaler. David apologised to Maureen saying that he was normally on the same wavelength as a Florist, but on this occasion he wasn’t. David then said to Maureen a phase used by the late Jerry Orbach, when he appeared as Lieutenant Lennie Briscoe in Law & Order, ‘When I hear the sound of hooves I think horses not zebras.’ 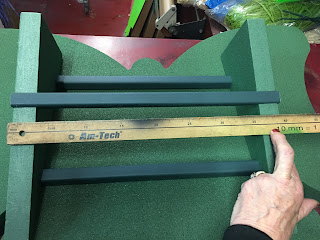 Maureen sent David pictures of the stand and provided key measurements which demonstrated that the stand would hold the ‘Butterfly’ at an angle of 27 degrees. This angle was fine if the onlooker was looking down at the Floral Tribute on the ground, however, for it to be seen prominently on the deck of the lorry the angle would have to be increased to almost 60 degrees. David achieved this by using triangular supports that had been used many times before to display Floral Tributes such as ‘Hearts’, ‘Teddy Bears’ and ‘Anchors’ and also being a fundamental component of the ‘windscreen’ in the ‘1950 Cab Front’ Themes that David can create for a number of vehicle makes.
As the funeral was in the early morning, David arranged for the Leyland Beaver to be stored overnight with Haywards Transport of Walsall, Vintage Lorry Funerals support partner in the Midlands. David went up the Fosse Way and used a new technique to get cars past the Leyland Beaver. Where there were limited suitable lay-byes, David used Bus Stops, the entrances to Industrial Estates or Stately Homes or low pavements outside a line of terraced houses, which enabled the vintage lorry to pull over and let those trapped behind him escape. Although David looses some time with this new strategy, he feels that it is much safer because when he has invited drivers to overtake in the past, impatient individuals further down the queue pull out early and nearly collide with someone higher up the queue that is also starting to overtake. Also during inclement weather David drives with his cab window shut and uses two flashes of his left indicator to signify that the road ahead is clear, however, some car drivers don’t understand and brake thinking that the lorry will be turning left. David also feels that there is a risk associated with inviting people to overtake because the power of the car and the experience of the driver are unknown. Car drivers are more tuned into David’s thinking in the early morning when most drivers are very experienced and drive as part of their employment.
David stopped at Lincoln Farm Truck Stop for his lunch and Debbie Hilton made him a Chicken Tikka meal which he has enjoyed many times before. She always makes it up from fresh ingredients and modifies the strength of the sauce to David’s liking and the meal is closer to a Buttered Chicken meal. Debbie is interested in the Leyland Beaver and often pops out to see the lorry whilst David is having his meal. She is also interested to know where David is going and what route he intends to take.
The following morning when David stopped at Roy Quinton Funeral Directors he saw the ‘Butterfly’ Floral Tribute for the first time. Although it looked exquisite, David realised that the stand only supported the central part of the ‘Butterfly’ and the wings moved as David lifted it off the ground. David was worried about how the ‘Butterfly’ would travel in transit so he re-positioned the ropes that he had used to secure the stand on its pedestal on the way from Bradford-on-Avon to Walsall. 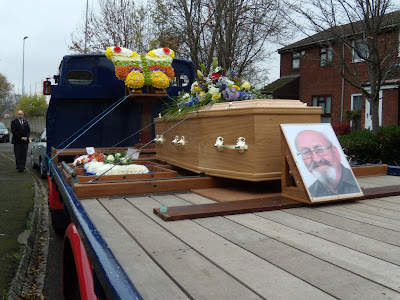 When David stopped outside the house he was most concerned as the ‘Butterfly’ wings were moving caused by the vibration from the Leyland 600 Engine on tick over, however, he need not have worried. The Deceased’s Daughter ran out of the house, pointed to the ‘Butterfly’ saying, ‘Look, he has even made it flutter like a real Butterfly!’
The ‘Butterfly’ Floral Tribute travelled well to Streetly Crematorium and not one flower head had come out of its place during the journey. Scott Quinton thanked David for all that he had done and the team always treat David as if he was one of them. It was the third time David had worked with this team, twice in Walsall and once in Wolverhampton.
David went home via the Fosse Way and refuelled at Tesco Tetbury where he used a 10 pence discount voucher and almost drew the maximum allowance of 100 litres. When David got home he jotted down some ideas, under the Lessons Learnt banner, and these included concepts how to support the wings of a ‘Butterfly’ if it was presented on an oasis stand.
Articles about the funeral appeared in four magazines, each one dealing with a different aspect of the Deceased’s interesting life, and these have provided a lasting treasured memory for his grandchildren. 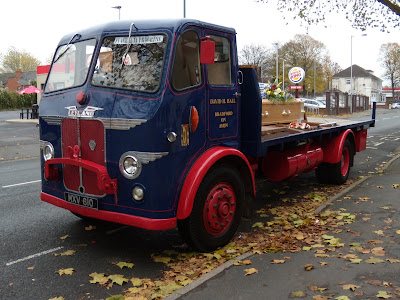