A funeral in Cherhill

In April most years David Hall enters the Leyland Beaver on the CTP Spring Road Run which involves a 100 mile trip around three White Horses in Wiltshire, the Westbury, Alton Barnes and Cherhill White Horses. Commercial Transport in Preservation is a group of Transport Enthusiasts who meet once per month in Salisbury, where the audience is entertained by Speakers on transport related topics. During the year CTP runs four road runs, the Gillingham Gathering in February, The Three White Horse Run in April, the Noggin Nash & Natter at Longbridge Deverill, on the A350, in July and a south coast run from Salisbury in the September. 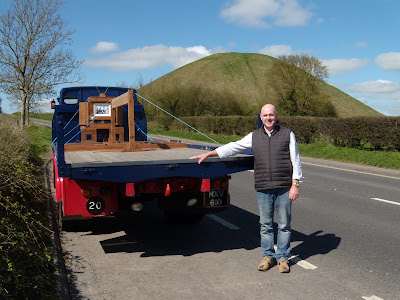 Stuart Smith normally accompanies David on the Road Runs and he enjoys hearing about some of the amazing journeys that the Leyland Beaver has undertaken since he was last in the cab. In 2017 the Leyland Beaver went past Arthur Mays Funeral Home in Westbury four times on Sunday April 2nd twice during the CTP Spring Road Run and once travelling to Warminster for the start and once travelling home from the finish at Crockerton on the A350. At the start point David told Stuart that his next job was for Arthur Mays and the width of the entrance road seemed to get narrower each time he passed. 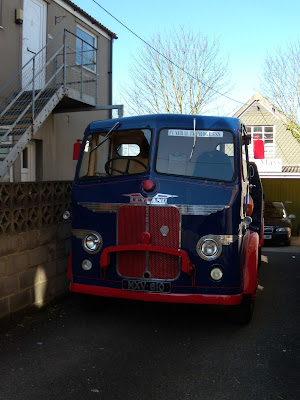 It was remarkable in April 2019 that the first funeral after the CTP Spring Road Run should be at Cherhill from a house from which the Cherhill White Horse could be seen. David had passed the entrance to the street as he trundled down the A4 towards Calne, however, he didn’t realise that he would receive a phone call from a Lady whose husband had passed away after 4 years in a Care Home.
The Funeral Director was situated in the middle of Calne and the location to load the coffin was in a small yard space behind Calne library and Stuart Smith was a great help as one of his Daughters works at the Library. David was sent pictures which demonstrated that a turning area existed and if this was clear then David could drive into the loading area and then reverse back into area behind the rear doors for the Funeral Director. This was a departure from the normal modus operandi in which David always reverses into a yard space from the main road, however, it would have created a high level of risk because the road through Calne is the busy A4 and the road around the library is often frequented by pedestrians taking a short cut to the town centre.
The Widow was worried about the width of the roads within Cherhill so David Hall went to Calne and Cherhill to provide solutions to the perceived problems. The direct road to the Church was too narrow, however, David suggested that the A4 could be used as it was a former three laned road at that point. It was also significant because during the 1950’s Leyland Motors positioned clocks on a tower by the roadside with ‘Leyland Motors for All Time’ spelt out with reflective squares and one of these clocks was erected at Cherhill.
When David checked out the area behind the library he was horrified to find a transit van parked in the loading area which was owned by a company that was servicing a door in the library. David spoke with the company and suggested in future the driver should leave a note in his window containing his mobile number so that the driver could be contacted if anyone should need the vehicle moved.
On the day of the funeral David was very concerned about whether or not someone would be parked in the loading bay and he turned right off the main A4 road, hoping that lady luck would be smiling on him. On turning the corner he found that the loading bay was clear, however, vans belonging to workmen attending to problems at the shops were parked in a way that would prevent David reversing out of the loading bay without any obstructions. David got out of the lorry and looked for any of the workmen to ask them to move their vans, however, no one could be found.
So David thought that if he could put the front of the Leyland Beaver right into the corner of the yellow hatched boxes of the loading bay there was a chance that he could turn it on a Sixpence and position the lorry between the van and the cars. The Leyland Beaver has an incredible lock, much better than any other classic or vintage lorry and MXV 610 has a Symms Injection Pump which has a unique feature that allows the lorry to gradually move when the engine is on tick-over. This allows David to concentrate fully on steering and when to apply full lock and when to release it. 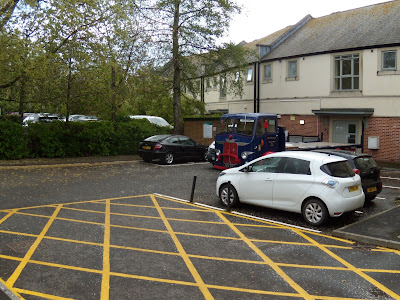 The operation went according to plan with the lorry managing to fit between the van and the cars. As David was straightening up the Leyland Beaver the workmen returned and applauded because none of them thought that the manoeuvre David was attempting was even possible.
One of the workmen came forward to shake David’s hand because he had undertaken the funeral of Bob Hall in Trowbridge on September 21st in 2011 who was well known to the workman. The workman told David that people in Trowbridge still talk about his wonderful lorry and the magnificent job that David had done for Bob.
As numbers of squally showers were anticipated during the day, David used his see-through fly sheet to protect the deck during the journey from Bradford-on-Avon to Calne. Even though the journey was less than 20 miles the lorry needed a complete wash before the coffin was loaded and he knocked on the rear door of the Funeral Directors to request a small drop of hot water in his bucket. Unbeknown to David the Funeral Director’s location was not manned that morning and he had to speak to the café at the end of the terrace who were keen to help him. David was disappointed that he wasn’t told that the Funeral Director’s premises would be unmanned that morning because if he had known he would have brought two flasks with him, one with coffee and one with hot water for washing the lorry. David has used this technique a number of times when the coffin is transferred onto the lorry in some remote location.
Whilst the Leyland Beaver was waiting outside the house the heavens opened and the widow of the Deceased thanked David for his foresight in providing the sheet which kept the coffin completely dry. The family walked in front of the Leyland Beaver towards the church accompanied by the dog of the Deceased. 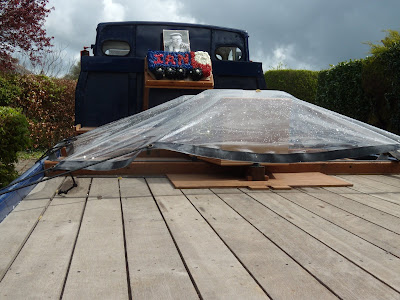 After the service in the church the Deceased was interred in the cemetery and the family members then thanked David for all that he had done. As David left the church and approached the A4 he had a wonderful sight of the Cherhill White Horse and the Lansdowne Monument. 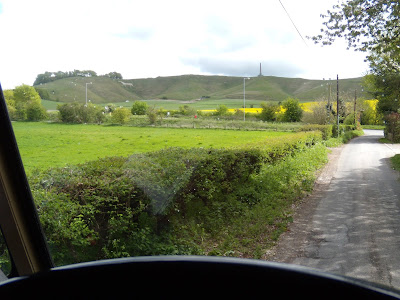