David Hall often thinks that some things are meant to be, and this was the case after he received a phone call from the family of a model collector in St. Austell. David provided the price and a description of what he could do, as part of the Vintage Lorry Funerals services including the aftercare package, however, he heard nothing for 4 days.
But during this time David saw:-
v          A Cornwall Transport lorry on the M4 heading west.
v          A St Austell Brewery lorry that was delivering into Trowbridge.
v          The vehicle that delivers coal into homes in Bradford-on-Avon is owned by a Cornish company
v          Peter Davies, who is known to David, wrote an article in Classic & Vintage Commercials about the Rowe Hillmaster lorries, that were built in Dobwells, Liskeard, from 1954 to 1962.

Consequently it was no surprise when David received a phone call from a Funeral Director in St. Austell to book the Leyland Beaver. Both sides of David’s Father’s Family had originated in Cornwall from Tin mining villages less than 10 miles apart and both families then migrated up to the Durham Coalfield when the tin ran out in Cornwall. So David has always had an affinity with the area, and although he had never been there before, he had sent Lorry Drivers with refrigerated cargos to the county many years ago from Lowestoft in East Anglia. One driver by the name of Barry Galer was more often than not on his way to Cornwall on a Sunday pulling trailer 391 loaded with frozen chickens and vegetables on a run that lasted two days and then a reload of Ice Cream from Okehampton. When David was planning out the route to St Austell he knew the bulk of the journey would be on the A30, however, he was shocked to find that the road down to St Austell is in fact, the A391.

The journey down to St. Austell is featured in the previous blog.

David Hall arrived at Kwikfit and found that repair work to their car park had restricted access into the garage. The builders working on a house opposite the Kwikfit yard stopped work and watched the Leyland Beaver slowly turn into the yard whilst David reversed, taking great care not to touch the parked cars or the metal posts that held up the plastic ribbon left by the workmen who had laid the tarmac. An hour and a half was then spent washing the lorry before putting it into the MOT bay.
David then walked to the Cornerways Guest House which is run by Peter Marsh who was most interested in the activities of the Leyland Beaver. Peter owns a Lancia 1923 car which was the first chassis-less car ever built and he pulled back the dust cover, delighted to show David his wonderfully kept car. Peter gave David a very quiet room and made him a superb breakfast in the morning.

The night before the funeral David was picked up by Stacey, the Funeral Director, and he was given a tour of all the locations to be visited the following day. It was pointed out that children were buried in unmarked graves next to the roadway in Campdown Cemetery and that he should use great care to avoid them. 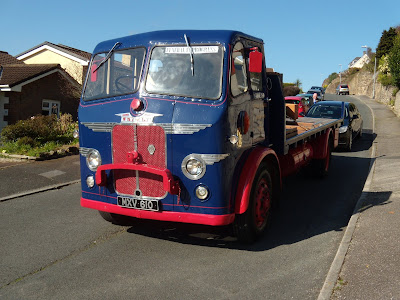 The Leyland Beaver was parked on the steep hill outside the Funeral Directors and a number of cars stopped to see the Lorry, whose metal wings on the cab front were reflecting the morning sun and the St. Piran’s flag, which was on the headboard, drew lots of attention. The staff of the Funeral Director were amazed how easily it was to load the coffin and that no one was needed to climb onto the deck to help David. 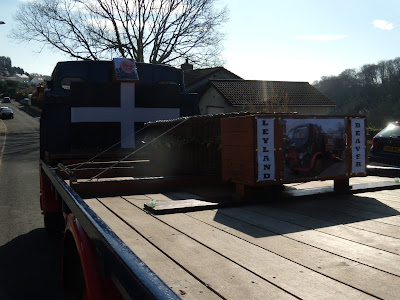 The road to the house was narrow by normal standards, however, it was wide by Cornish standards, and the diminutive turning circle near the house created its own set of challenges. Outside the house a number of people took pictures and commented how appropriate the wooden ‘Model Box’, positioned at the head of the coffin was, as the Deceased had a model collection thought to contain up to 7500 items. 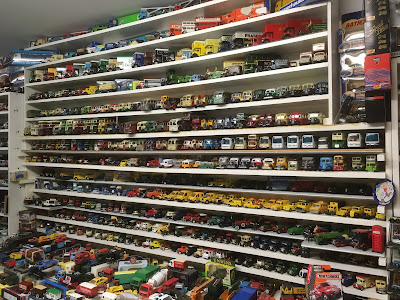 As the Leyland Beaver started to reverse into the driveway of the Mount Charles Methodist Church the traffic was building up along the main road. It was a particularly challenging reverse to get between two stone pillars at an angle and then twist around into the drive, which would mean that the Leyland Beaver would have to come very close to one of the pillars. Two of the Funeral Director’s staff offered to watch David reverse safely into the driveway but when he made his first approach as soon as the Leyland Beaver got close to the nearside pillar both men told him to stop. When someone is guiding a Lorry Driver and tells him to stop, then he must stop as there may be some situation that he can’t see, like a young child that has broken free of their Mother’s grasp. David made a second and a third attempt and the same thing happened but David was confused because he knew that the lorry would go between the pillars although it would be only an inch from one of the pillars. An inch is too close for the uninitiated, however, Lorry Drivers know that an inch clearance is no problem provided it doesn’t get any smaller.
David was frustrated, the traffic was gridlocked and in desperation he touched the picture of his late Grandson which is held above the windscreen and asked for his help. Suddenly a young man in his working clothes got out of a car, approached the Leyland Beaver and said, ‘These Funeral (expletives) are leading you a merry (expletive) dance. I know what you are trying to do and I’ll watch you. These Funeral (expletives) are (expletive) scared that you will hit a pillar, but you won’t because that old girl has got a tremendous lock.’
David then followed the instructions of the young man, whose colourful language had shocked some of the mourners waiting to get into the church, and in no time the Leyland Beaver was safely in the driveway. The young man shook David’s hand before jumping back into his car which was by now the cause of the gridlock.
Traffic on the approach road to Campdown Cemetery came to a standstill for no apparent reason and with no traffic coming in the other direction, David got out of the cab and spoke with two young ladies who were walking towards him. They explained that a car had been abandoned near the entrance to the cemetery which had no road fund tax so it was being lifted off the street. David relayed the information to the Family in the limousine behind who thought it was hilarious, however, Stacey, the Funeral Director, used her influence so that that car was loaded but then secured later down the road ensuring that the cortege could now enter the cemetery. 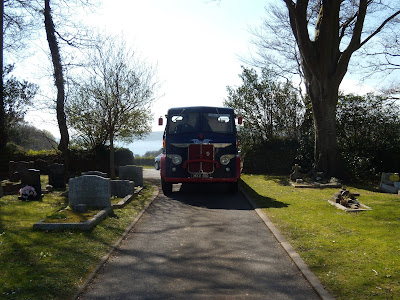 Getting into the cemetery involved spinning the Leyland Beaver on a sixpence, turning through 90 degrees in less than 20 feet. Care was taken to avoid the graves of children next to the roadway and the Deceased was laid to rest in an idyllic spot. 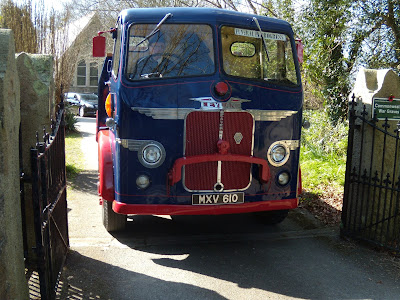 On the way home David stopped at Woody’s Diner for a cup of tea and used the toilets before heading home, refuelling at Sainsbury’s Frome. On the journey back David reflected on the help he had received during the funeral and he thought about his late Grandson and Barry Galer who had also passed away. Since the 1970’s David had exchanged Christmas Cards with Barry Galer and had met him twice after he had to finish driving due to ill health.
Posted by David Hall at 05:43 No comments: