David Hall received a phone call from the Brother-in-Law of a man who had just passed away.
Ellis apologised for calling on a Bank Holiday Monday, he was just expecting an answer-phone to click in, and he was delighted that David took the call. Ellis said that he had got Vintage Lorry Funerals phone number from the internet, however, he was surprised to find that a number of people were trying to copy what David has achieved. Ellis said, ‘I don’t want any knock-off, I only want the original because only the best is good enough for my Brother-in-Law, who was only 56 when he passed away.’
David was asked to speak with a Funeral Director in Ullesthorpe and a lady called Della measured their driveway which appeared to be wide enough to accommodate the 1950 Leyland Beaver. However, when David arrived there his initial observations were that the driveway had a number of pinch points caused by hedges, trees or gates and it would be extremely difficult to get the lorry down the driveway.
The Funeral Directors Staff were most concerned as the Deceased was thought to be over 25 stone and they were very worried about carrying him up the drive to get to the lorry. Having seen their disappointment, David said that if the Funeral Director could provide two staff, one to walk in front of the lorry and one to walk behind the Leyland Beaver, then he would make an attempt.
Della had arranged for both sides of the street to be coned off which was an immense help. David then reversed into the entrance of the driveway with the Leyland Beaver on full lock. Having a Simms Fuel Lift Pump the Leyland Beaver can gently move on tick-over and allows David to focus entirely on when to release the full lock. Once the Leyland Beaver was into the entrance of the driveway, David took instruction from both staff members and the lorry slowly inched its way down the drive on tick-over.
When David stopped the engine he looked up and saw an amazing sight, the tower of a former windmill which he hadn’t noticed as he approached the village earlier that day. 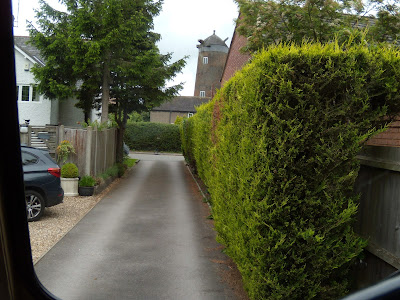 The Funeral Director’s Staff were delighted and one handed over an envelope from the Family, containing David’s money for the funeral. David joked, ‘I’m off home now, I have already earned my fee, a bit like Len Shackleton’, the former Sunderland Footballer in the 1950’s, also known as The Clown Prince of Soccer. 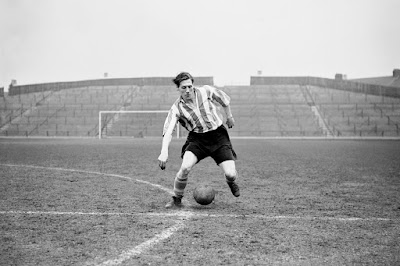 One of the Funeral Director’s staff had originated from Sunderland and knew all about ‘Shack’ who played in the days when footballers were all paid £10 per week. Regularly Shackleton would do something magical in the first 10 minutes, Sunderland would score as a result of his wizardry and after that he would just pass the ball telling his team mates and the crowd, ‘I have already earned my £10.’ The gates at Roker Park were locked 15 minutes before the kick off, with everyone inside keen to watch ‘Shack’s’ tricks during the warm up and he took his trickery into matches sometimes playing a one-two with the corner flag. After he finished playing ‘Shack’ became a Journalist, however, he never lost his football skills and his party trick was putting a coin on his shoe, flicking it up and catching the coin in the top pocket of his jacket.
The Funeral Director’s staff were amazed how David effortlessly turned the huge coffin on the deck and secured it in place without any assistance.
David knew very little about the Deceased other than he owned a haulage company. David had no clue what he would meet in the haulage yard, however, he should have perhaps picked up a message from the pile of Yorkie Bars that were left at the Funeral Directors. 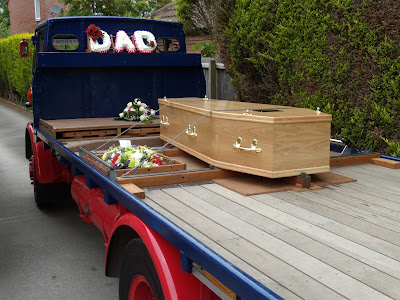 David approached the road into the haulage yard and saw 9 white Scania Tractor Units parked in a line on the grass perpendicular to the road. As David turned into the haulage yard he encountered a crowd of over 200 people made up of Family, friends, employees, Sub Contractors and support companies, including Crouch Recovery. Two vehicles that were from Crouch Recovery were driven by ‘Fluff’ and Jamie both of whom have featured in ‘Trucking Hell’, on the 5Spike TV Chanel. 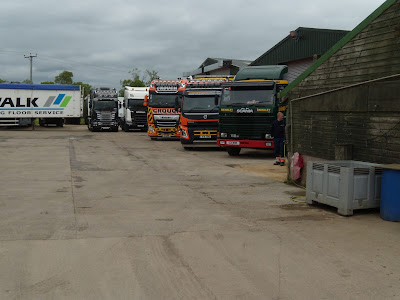 At a given time, every Lorry Driver simultaneously applied their truck’s air horn and the noise was deafening. The horns were shut off in unison and there was silence apart from the tick-over of the 1950 Leyland Beaver. It was an amazing send off for a man whose whole life revolved around his family and his trucks.
At the church 8 men, all the same height and build stepped forward to carry the Deceased the 200 yards to the church doors.
The Deceased was laid to rest in the church grounds and whilst David was waiting to speak with the Family, he was approached by two Irishmen who wanted to look at ‘the immaculate restoration that was undertaken on this vehicle’, as one the men put it. Apparently news of the Leyland Beaver landing in Ullesthorpe went around social media like a wildfire. The two men were impressed how sheets of Aluminium were welded together to provide a one piece finish on the cab, just like the Leyland Beaver had when it rolled out of the factory in 1950.
Posted by David Hall at 03:46